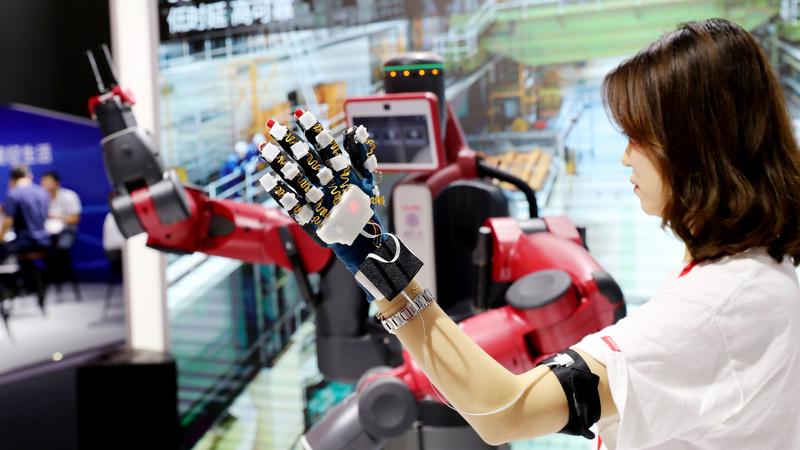 A technician demonstrates remote control of a smart robot supported by 5G services and artificial intelligence at a recent high-tech exhibition held in Shanghai. (PHOTO / XINHUA)

Chinese mobile carriers are setting up a string of cross-industry partnerships as the global telecom industry enters the final sprint toward the commercialization of fifth-generation mobile communication technology.

The country's second-largest mobile carrier by subscribers, China United Network Communications Group Co Ltd announced on Thursday it will set up 5G laboratories with partners such as Tencent Holdings Ltd and Baidu Inc to accelerate the maturity of the technology.

Also known as China Unicom, the company is conducting 5G trials in 16 cities, and plans to conduct business application demonstrations and pre-commercial operations in 2019, before the commercial launch of the superfast technology in 2020.

Shao Guanglu, deputy general manager of China Unicom, said, "We will accelerate the step to commercialize 5G, and will further strengthen cooperation with more partners to build a win-win ecosystem for 5G services."

According to Shao, the joint laboratory with Tencent will focus on the research and development of key technologies and business applications, such as edge computing, network slicing and high-accuracy positioning services.

The laboratory with Baidu will center on how to better integrate artificial intelligence with 5G, with emphasis on the internet of vehicles and big data technologies.

Baidu and Tencent are both strategic investors in China Unicom, as part of the latter's broader mixed ownership reform.

China Mobile Communications Corp, the world's largest mobile carrier by subscribers, has teamed up with Huawei Technologies Inc and Shanghai Automotive Industry Corp to develop technologies for the internet of vehicles.

Huang Yuhong, deputy head of the China Mobile Research Institute, said 5G will not be just another technology or system. Instead, it is a platform in which the telecom industry needs to be deeply linked with other sectors. That is the fundamental difference between 5G and 4G, he said.

ALSO READ: China Unicom to roll out 5G on mass scale by 2020

"So, close partnership with companies from a wide range of industries is key to winning the global 5G race," Huang said.

On Thursday, China Unicom also clarified its 5G networking strategy for the first time, saying that it will focus on standalone networks. The move helps it to join the ranks of its two domestic rivals China Mobile and China Telecom Corp Ltd, which both said earlier that they will center on standalone 5G networks.