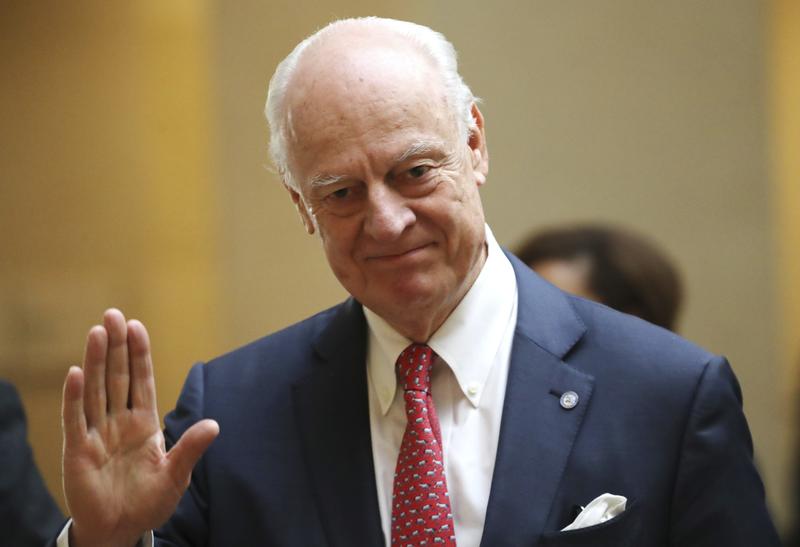 UNITED NATIONS — The UN special envoy for Syria said in his farewell UN briefing Thursday that "an extra mile" is needed to form a committee to draft a new constitution for the conflict-torn country because a list of participants submitted by Russia, Iran and Turkey is unacceptable to the United Nations.

UN special envoy for Syria Staffan De Mistura, who is stepping down Dec 31 after four years and four months as UN envoy, looked back at one of the United Nations' toughest jobs and said that "I believe we have made some difference — but not enough"

Staffan de Mistura told the Security Council that the 50-member list provided by the three countries was unbalanced and dropped experienced experts, so it "needs a further review and revision." The nearly yearlong effort to form a 150-member constitutional committee, which is key to holding free elections and hopefully ending the seven-year civil war, has been dogged by objections from the Syrian government over the 50-member list representing experts, independents, tribal leaders and women. There is already agreement on 50-member lists from the government and opposition.

De Mistura was authorized to put together the third 50-member list representing civil society at a Russian-hosted Syrian peace conference in Sochi on Jan 30.

But Syrian President Bashar Assad's government objected to the list that he put together. The foreign ministers of Russia, Iran and Turkey — the guarantor states in the so-called "Astana process" aimed at ending the violence in Syria — handed de Mistura their own agreed 50-member list of civil society representatives at a meeting in Geneva on Tuesday.

"The United Nations, having examined the names, assessed that we would not feel comfortable yet giving the UN stamp of legitimacy to all 50 of them as meeting the necessary criteria of credibility and balance — hence the need for going an extra mile," de Mistura told the Security Council.

He said the list from the Astana guarantors included some names from his list, but experienced experts with excellent credentials "who would also have been natural bridge builders" were dropped.

"No list will be perfect," de Mistura said. "But in our assessment, the list needs a further review and revision." Russian Ambassador Vassily Nebenzia told the council that the civil society list handed to de Mistura "was approved — let me underscore this — by Damascus and the Syrian opposition." But French Ambassador Francois Delattre and British Ambassador Karen Pierce said the list from the guarantors was "unbalanced and unworkable." Pierce noted that Russian President Vladimir Putin had set a deadline of the end of the year to form a constitutional committee, and "if progress can be made then we absolutely urge the Syrian authorities and their supporters to take it." "But when all is said and done, the United Nations can only join a process that is balanced," she said.

The foreign ministers of Russia, Iran and Turkey also agreed Tuesday to facilitate convening the first session of the constitutional committee early next year, saying they hoped it will lead to the launch of a "viable and lasting" peace process.

Russia's Nebenzia said that meeting in Geneva "will be an important step to prepare the constitutional reform in Syria." Syria's UN ambassador, Bashar Ja'afari, reiterated his government's commitment "to take part in any serious effort to reach a political solution," and he called for the constitutional committee to be established "as soon as possible." "Nobody has the right to doubt the Syrian government's support for this process," Ja'afari said.

But he added that the UN is "a facilitator," and "nobody can be a self-proclaimed participant in this process" except the Syrians.

De Mistura, who is stepping down Dec 31 after four years and four months as UN envoy, looked back at one of the United Nations' toughest jobs and said that "I believe we have made some difference — but not enough." "We have saved lives with some cease-fires and de-escalations, no matter how limited in scope and time, and stimulated humanitarian access to places that were not getting it — but nowhere near what civilians needed and desperately asked for," he said.

De Mistura said the UN also convened talks with the government and opposition, and helped unite the opposition, but he lamented that the parties haven't yet recognized that "they must do business and actually negotiate, let alone reach any agreements." "I deeply regret what has not been achieved, and I am sorry more was not possible," he said. "But we have identified and put in place some of the key building blocks" for the future — and for his successor, veteran Norwegian diplomat Geir Pedersen, to build on.

At the end of his speech, de Mistura — in a very rare move — walked around the horseshoe-shaped Security Council table shaking hands with all the male ambassadors and kissing the hands of the female ambassadors. He then returned to his seat as the council chamber burst into sustained applause.