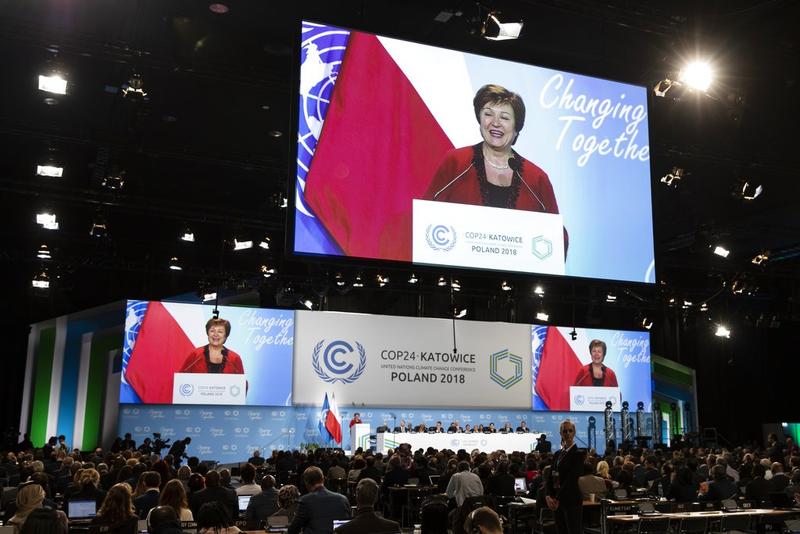 KATOWICE, Poland — The World Bank will give equal weight to curbing emissions and helping poor countries deal with the "disastrous effects" of a warming world as it steps up investments to tackle climate change in the first half of the 2020s, it said on Monday.

The bank and its two sister organizations plan to double their investments in climate action to about US$200 billion from 2021-2025, with a boost in support for efforts to adapt to higher temperatures, wilder weather and rising seas.

The latest figures on international climate funding for developing nations show barely a quarter has been going to adaptation, with the bulk backing clean energy adoption and more efficient energy use, aimed at cutting planet-warming emissions.

"We live in a new normal in which disasters are more severe and more frequent," World Bank CEO Kristalina Georgieva told the Thomson Reuters Foundation at UN climate talks in Poland.

"We have to prioritize adaptation everywhere, but especially in the most vulnerable parts of the world," she said, pointing to the Horn of Africa and the Sahel, coastal regions and small island states.

Of the US$100 billion the World Bank plans to make available in the five years from mid-2020, half would go to adaptation measures, it said.

"Climate change is an existential threat to the world’s poorest and most vulnerable. These new targets demonstrate how seriously we are taking this issue," World Bank Group President Jim Yong-kim said in a statement.

From 2014-2018, the World Bank spent nearly US$21 billion on adaptation, which accounted for just over 40 percent of the climate benefits generated by the institution's funding overall.

Former UN Secretary-General Ban Ki-moon said the bank's pledge to use half its climate finance to find solutions to deal with changing weather patterns was "important".

"Climate change is already having a disastrous impact on people right around the world and we are nearing the point of no return," said Ban. "So we must take bold action to adapt to the reality of the threat facing us all."

A recently launched Global Commission on Adaptation, which Ban chairs with Georgieva and Microsoft co-founder Bill Gates, aims to put political muscle behind efforts to keep people safer in a hotter world.

The remaining US$100 billion in promised World Bank Group funding will come from the International Finance Corporation (IFC), which works with the private sector, and the Multilateral Investment Guarantee Agency, as well as private capital the group raises.

"There are literally trillions of dollars of opportunities for the private sector to invest in projects that will help save the planet," said IFC chief Philippe Le Houérou.

The IFC will identify opportunities, use tools to make investments less risky, and attract private-sector cash in areas including renewable energy, green buildings, clean transport in cities and urban waste management, he added.

The new World Bank funds would "help to build resilience, make us safer, and improve lives", she said.

"Global action needs to accelerate before it is too late," she added.

But it overlooked "the desperate need to radically scale up financing for off-grid renewable energy" to help the poorest gain access to electricity, they added.