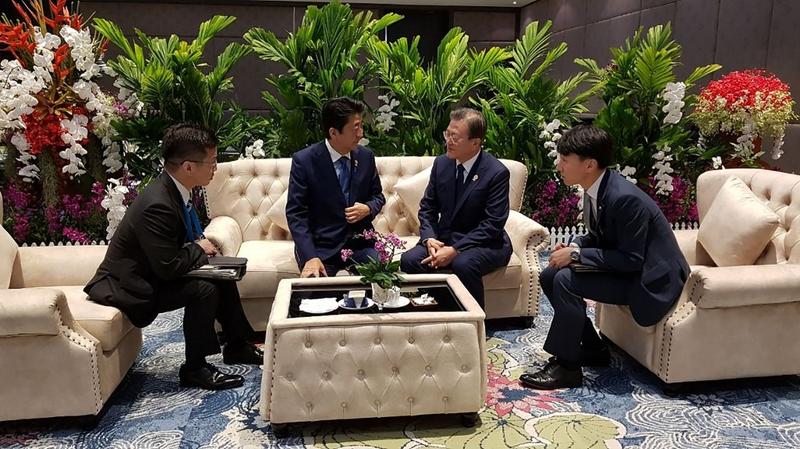 The two leaders held 11-minute talks on the sidelines of a meeting of the Association of Southeast Asian Nations (ASEAN) in Bangkok, the spokeswoman, Ko Min-jung, said in a statement.

The meeting comes as relations have plunged to their lowest in decades after ROK's top court last year ordered Japanese firms to compensate some wartime forced laborers.

"Both leaders reaffirmed the principle that bilateral issues should be resolved through dialogue," Ko said, referring to ongoing working-level talks between the two countries' foreign ministries.

ALSO READ: Abe renews call on ROK to keep promises as a chance to mend ties

The two leaders agreed that their ties were important and the dispute should be settled through dialogue, Japan's NHK broadcaster reported.

Abe also expressed condolences over the death of Moon's mother last week, according to NHK.

As the feud spilled over into trade and security issues, Moon and Abe have not held a summit for more than a year, though they shook hands at a Group of 20 leaders' meeting in Japan in June.

But there has been little sign of progress. Abe reiterated to Moon that the issue of wartime forced labor was settled by a 1965 treaty that normalized relations following Japan's 1910-45 colonial rule, NHK said.

While wartime bitterness divides the neighbors, they are both US allies and face threats from the Democratic People's Republic of Korea (DPRK)'s nuclear weapons and missile programs.

ROK has been urging Japan to lift trade measures it imposed this year, as ties deteriorated.

If Japan does so, ROK says it could revoke a decision to end a pact on the sharing of military intelligence. The agreement expires later this month.

ROK Defense Minister Jeong Kyeong-doo said at a parliamentary session the deal should be kept "if it helps withour security in any way" but the trade issues also needed to beresolved.