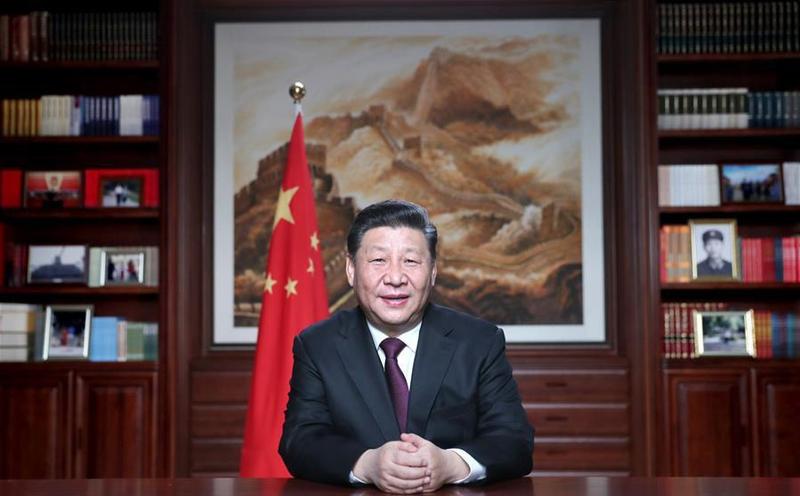 President Xi Jinping delivers his New Year's speech on Monday in his office in Beijing. Joint efforts are needed as China faces both opportunities and challenges in 2019, he said. (Ju Peng / Xinhua)

China will continue to promote the building of a community with a shared future for mankind in the new year while remaining resolute and confident in the defense of its national sovereignty and security, President Xi Jinping said on Monday.

Xi, also general secretary of the Communist Party of China Central Committee, made the remark in delivering a New Year’s speech through the China Media Group and the internet in Beijing.

Xi extended New Year’s wishes to all Chinese and friends all over the world, and said that, in 2018, China strengthened its friendships with other countries, enhanced mutual trust, and enlarged its circle of friends by carrying out its diplomatic agenda both at home and abroad.

No matter what these changes bring, China will remain resolute and confident in its defense of its national sovereignty and security

On the international landscape, Xi said the world is undergoing profound changes unseen in a century. “No matter what these changes bring, China will remain resolute and confident in its defense of its national sovereignty and security, and China’s sincerity and goodwill to safeguard world peace and promote common development will remain unchanged.”

“We will continue to push ahead with the ... Belt and Road Initiative, and continue to advocate for the building of a community with a shared future for mankind and work tirelessly for a more prosperous and beautiful world.”

Hailing the year of 2018 as “a full year” for the Chinese people, Xi said they made joint efforts to push the nation’s economy toward high-quality development and have produced good results.

He recalled his inspection tours across the country and lauded the achievements that the country made in environmental protection, improvement of people’s well-being and the implementation of national strategies such as the coordinated development of the Beijing-Tianjin-Hebei region, the development of the Yangtze River Economic Belt and the construction of the Guangdong-Hong Kong-Macao Greater Bay Area.

“These achievements are all thanks to the hard work of people from all of China’s ethnic groups, who are the trailblazers of the new era,” Xi said.

He also praised the nation’s efforts in poverty reduction, saying another 125 poor counties and 10 million poverty-stricken rural residents were lifted out of poverty in the past year.

His heart still goes out to the people living in hardship, he added.

Noting that China celebrated the 40th anniversary of reform and opening-up last month, Xi said that in the past year, the country launched over 100 major reform measures, held the first China International Import Expo and began construction of a pilot free trade zone in Hainan.

“The world has seen China’s accelerating reform and opening-up, and its determination to carry it forward,” Xi said.

“China’s reforms will never stop, and its doors will only open ever wider.”

The year 2019 marks the 70th anniversary of the founding of the People’s Republic of China. Xi said the country has braved thorny paths and confronted stormy weather over the past 70 years.

“Despite the complexities and difficulties we may face on the road ahead, we shall always closely rely on the people and stick to self-reliance and hard work,” Xi said.

He added that, with rock-solid confidence, and racing against time with unwavering determination, Chinese people will carry forward their unprecedented great cause with resolute determination.

Saying that the new year will see both opportunities and challenges, Xi called on all the Chinese people to work together shoulder to shoulder, and said policies to cut taxes and fees must take root to ease the burden on enterprises.