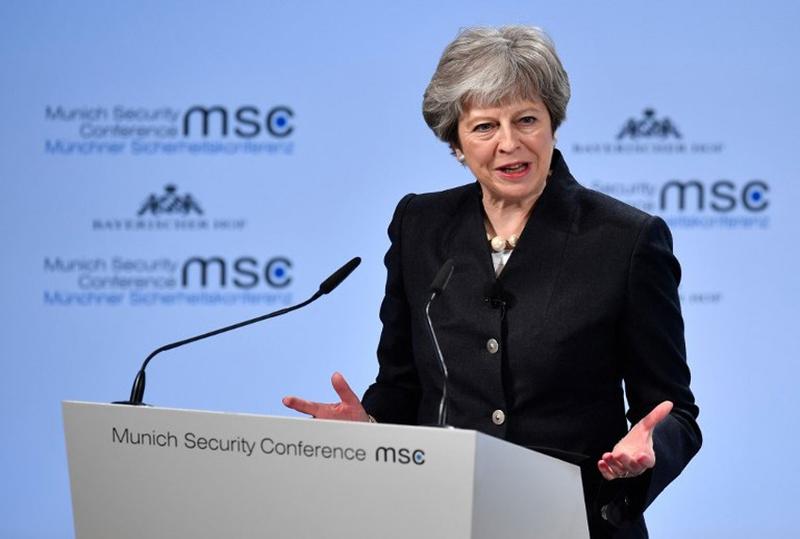 British Prime Minister Theresa May gives a speech during the Munich Security Conference, Feb 17, 2018 in Munich, southern Germany. Sixty-two lawmakers of Britain’s Conservative Party have signed a letter demanding that Prime Minister Theresa May deliver a Brexit that ensures "full regulatory autonomy" for Britain after it leaves the European Union. (THOMAS KIENZLE / AFP)

LONDON – More than 60 Conservative lawmakers have written to Prime Minister Theresa May demanding a quick, clean break from the European Union (EU), adding pressure on her to take a "hard Brexit" stance ahead of a meeting to decide Britain's negotiating position.

May, whose government and party is divided over Brexit, has just eight months to strike a withdrawal deal with the European Union, but insists Britain will leave at 2300 GMT on March 29, 2019.

The group of 62 lawmakers in her party demanded a tougher approach in a number of areas, including Britain's right to move away from EU rules after leaving, and the terms of any transition period.

"Your government must have the ability to change British laws and rules once we leave, rather than being a 'rule-taker'," the letter, whose signatories include former party leader Iain Duncan Smith and ex-development secretary Priti Patel, said.

The EU has repeatedly asked May to clarify how she sees Britain's future relationship with the bloc but the weakened prime minister, who lost her parliamentary majority in an ill-judged snap election, has been wary of setting out too many details as her party is so divided on the issue.

May will host senior ministers at her country residence Chequers on Thursday to try to broker an agreement between the factions. She is then expected to set out her plans in a speech in the next few weeks, before formal trade talks begin in March.

In the letter, the lawmakers say they will only support a transition period – favored by proponents of a "softer" Brexit, during which Britain would stay within many existing EU structures – if all the details are fully negotiated by March next year.

Britain must be able to change its laws without authorization from Brussels from the moment it formally leaves the EU, they say.

On Tuesday, Britain's chief Brexit negotiator, David Davis, said he aimed for a system of "mutual recognition" where both sides agree common regulatory outcomes, such as consumer protection or financial stability, but are able to pursue their own policies to reach those goals.

EU leaders have warned Britain cannot have both freedom from the bloc's regulations and frictionless trade.