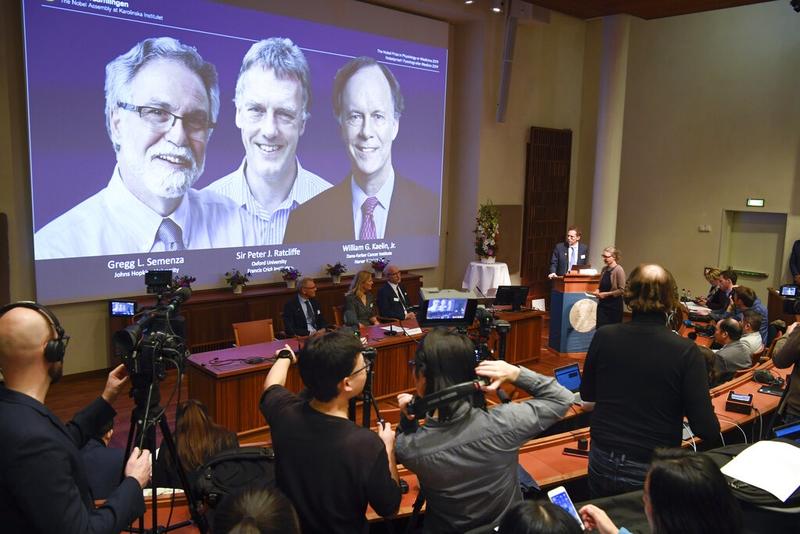 Thomas Perlmann, far right, Secretary-General of the Nobel Committee announces the 2019 Nobel laureates in Physiology or Medicine during a news conference in Stockholm, Sweden, Oct 7, 2019. The prize has been awarded to scientists, from left on the screen, Gregg Semenza, Peter Ratcliffe and William Kaelin for their discoveries of "how cells sense and adapt to oxygen availability". (PONTUS LUNDAHL / TT VIA AP)

Three researchers from the US and Britain won a Nobel Prize for showing how cells sense and adapt to changing oxygen levels, a line of research that’s already led to the development of new drugs.

Americans William Kaelin of the Dana-Farber Cancer Institute in Boston, Gregg Semenza of Baltimore’s Johns Hopkins Medicine, and Peter Ratcliffe of the Francis Crick Institute in London received this year’s award for physiology or medicine, the Nobel Assembly at the Karolinska Institute said Monday in a statement.

Their discoveries have also paved the way for promising new strategies to fight anemia, cancer and many other diseases

“The seminal discoveries by this year’s Nobel laureates revealed the mechanism for one of life’s most essential adaptive processes,” according to the statement. “Their discoveries have also paved the way for promising new strategies to fight anemia, cancer and many other diseases.”

Semenza and Ratcliffe separately studied the processes surrounding the sensing of oxygen, and found it was at work in virtually all the body’s tissues. Semenza worked in the 1990s on identifying a protein complex that binds to cells’ DNA in response to levels of oxygen in the cell’s environment.

The complex, called hypoxia inducible factor, regulates production of red blood cells. The science behind it is the basis for an anemia drug codeveloped by AstraZeneca Plc and Fibrogen Inc called roxadustat that was approved in China in December.

GlaxoSmithKline Plc has filed for Japanese approval of a drug based on the mechanism, called daprodustat. Kaelin’s work linked the same oxygen-regulating machinery to a role in cancer, which is also being mined for potential therapeutics.

Annual prizes for achievements in physics, chemistry, medicine, peace and literature were established in the will of Alfred Nobel, the Swedish inventor of dynamite, who died in 1896. The total amount for each of the 2019 prizes is 9 million kronor (US$909,000).