People or wild boars, which is the master of Fukushima? 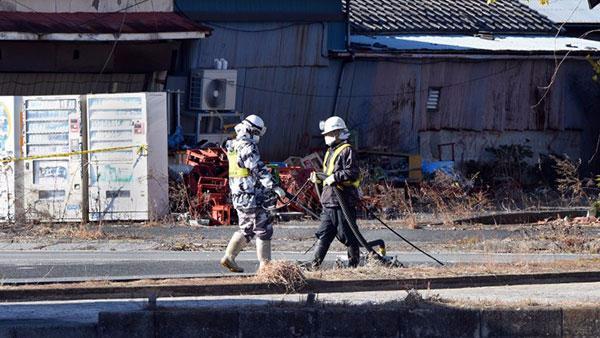 Hundreds of the animals, which have been known to attack people when enraged, descended from surrounding hills and forests into towns left deserted after the 2011 disaster.

Now they roam the empty streets and overgrown backyards of Japan's deserted seaside town of Namie, foraging for food.

"It is not really clear now which is the master of the town, people or wild boars," said Tamotsu Baba, mayor of the town, which has been partially cleared for people to return home freely at the end of the month.

"If we don't get rid of them and turn this into a human-led town, the situation will get even wilder and uninhabitable."

At the end of March, Japan is set to lift evacuation orders for parts of Namie, located just 4 km (2.5 miles) from the wrecked nuclear plant, as well as three other towns.

Residents fled to escape radiation spewed by the Fukushima Daiichi plant, whose reactors went into meltdown after it was struck by an earthquake and tsunami on March 11, 2011.

In the nearby town of Tomioka, hunter Shoichiro Sakamoto leads a team of 13 assigned to catch and kill the wild boars with air rifles. Twice a week, they set about 30 cage traps, using rice flour as bait.

"After people left, they began coming down from the mountains and now they are not going back," he said. "They found a place that was comfortable. There was plenty of food and no one to come after them."

Since last April, the squad has captured about 300 of the animals, and intends to keep up its work even after the evacuation orders are scrapped, Sakamoto added.

More than half of Namie's former 21,500 residents have decided not to return, however, a government survey showed last year, citing concerns over radiation and the safety of the nuclear plant, which is being decommissioned.

But at town meetings earlier this year to prepare for the homecoming, residents had voiced worries about the wild boars.

"I'm sure officials at all levels are giving some thought to this," said Hidezo Sato, a former seed merchant in Namie. "Something must be done."