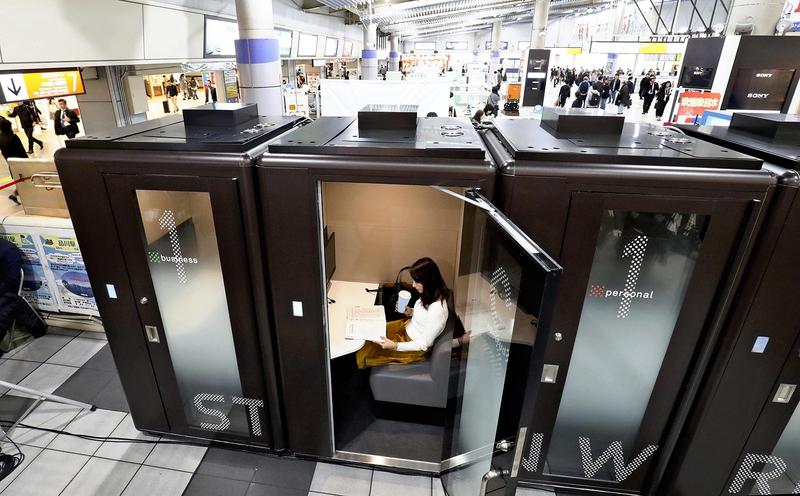 TOKYO - Railway companies are expanding their businesses by installing individual-use offices available to anyone in the commercial areas within train stations, called ekinaka in Japanese.

As work style reform — in this case, aiming to establish the practice of working anytime, anywhere — is being promoted, they expect that this new style of offices within railway stations will generate a certain level of demand. Ekinaka, which have mainly been used as commercial spaces, have become more diversified in their purposes.

Each booth is equipped with a desk, sofa, power outlet, free WiFi connection and heating, among other equipment. Users can enjoy the fact that the booths are soundproof as well

Four box-shaped offices, which look like phone booths, were installed Wednesday inside the ticket gate at JR Shinagawa Station by East Japan Railway Co (JR East) as a demonstration experiment. The facility, called “Station Booth,” has been developed for use as a private office inside a station.

Each booth is equipped with a desk, sofa, power outlet, free WiFi connection and heating, among other equipment. Users can enjoy the fact that the booths are soundproof as well. Reservations are made via a designated website and users are allowed to stay in the space for up to 30 minutes.

The area surrounding JR Shinagawa Station is one of the busiest business districts in Tokyo. People are seen working outdoors, sitting on benches or in cafes.

A consulting firm employee, Yuto Katsubayashi, 23, welcomed the new service, saying: “I feel comfortable using my PC without worrying about drawing people’s attention. I can work effectively while waiting for a train during a transfer.”

JR East has also set up four Station Booths each at Tokyo and Shinjuku stations. They are free of charge during the experiment period, which continues until February next year. About 3,000 people have registered as members for the new service.

A spokesperson for JR East said: “It will be unnecessary to go back to their offices if they use the booths upon returning from a business trip. We want to support more flexible ways of working.”

Based on the experiment results, JR East will consider introducing another type of booth for group use.

READ MORE: We’re all working to change the future

Tokyo Metro Co also started installing box-shaped private offices from June on a trial basis at Tameike-Sanno, Kasai and Kita-Senju stations — places known to have a lot of office workers and others passing through them.

The number of registered users has reached about 1,700 and the company has extended the experiment period to this month, although it was initially scheduled to end in September.