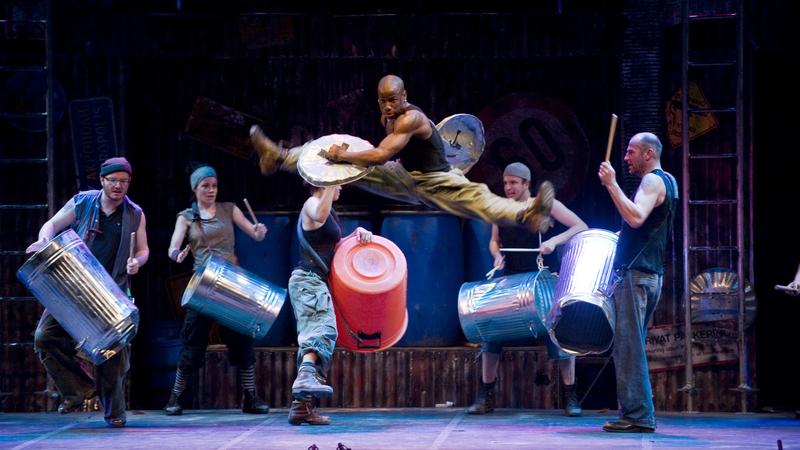 Stomp, a combination of percussion, action and comedy, will return to China with a five-city tour, including of Beijing, Shanghai and Guangzhou. (PHOTO PROVIDED TO CHINA DAILY)

From June to September 2016, Stomp, a well-known percussion performance stage show, was shown in Beijing some 70 times, which attracted about 50,000 people. This year, it will return to the city from Sept 26 to Oct 6, and will be staged at the Poly Theater.

It's always a surprise to us that Stomp continues to be so popular all over the world. I think the universal language of rhythm is something in all of us, no matter where we are from

The show, created in Brighton, in the United Kingdom, in the summer of 1991, is the result of a 10-year collaboration between Luke Cresswell and Steve McNicholas.

The duo first worked together in 1981 as members of the street band Pookiesnackenburger and the theater group Cliff Hanger.

Together, these groups presented a series of street comedy musicals at the Edinburgh Festival throughout the early 1980s.

The show now in its 17th year, is an international hit, and has been staged in 53 countries with over 20,000 performances, including one at the 2012 Summer Olympics closing ceremony in London.

"It's always a surprise to us that Stomp continues to be so popular all over the world. I think the universal language of rhythm is something in all of us, no matter where we are from. The show has grown as it has traveled, influenced by the different performers, different cultures and different rhythms from around the world," Cresswell says.

After Beijing, the show will travel to Guangdong, Chengdu, Shanghai and Hangzhou.

Stomp first played in Hong Kong in the 90s. And Cresswell recalls that it was great to visit although they had to search all over to find scrap metal for the show.

They have since played in Shanghai and Beijing.

"The best thing about the show is that we don't need to change it, rhythm crosses all boundaries, countries and cultures. Sometimes the audiences laugh at different things, different observations but in general, the show translates the same, whether in the UK or in China," he says.

"Stomp is all about eight individual characters on stage, all different from one another but working together, and sharing the same rhythm."

Stomp, a combination of percussion, action and comedy, will return to China with a five-city tour, including of Beijing, Shanghai and Guangzhou. (PHOTO PROVIDED TO CHINA DAILY)

A self-taught percussionist, who left school at the age of 15 to pursue music as a career, Cresswell says that as a drummer he loves rhythm, and as a performer he loves the stage.

"Stomp is a great way to explore performance through rhythm. Using rhythm, movement and comedy as a language is a wonderful way to connect with the audience, to share ideas and emotions," he adds.

Asked about how the idea for Stomp took shape, Cress-well spoke about how when he was with the street band Pookiesnackenburger in Covent Garden Piazza, London, decades ago, he saw the African troupe The Burundi Drummers promoting their Royal Festival Hall appearance, with a teaser performance in the street.

"They were thrilling and mesmerizing. And when they finished, they picked up their drums and carried them away over their shoulders. They looked like 'bin men', the people who collected our rubbish by picking up our trash cans and carrying them to their truck, over their shoulders. It was a classic British image, something you would see once a week, early in the morning.

"Then, literally the next day we were at Dockerills, the local hardware shop in Brighton, picking out metal dustbins," he says.

Later, they performed in Edinburgh at the Fringe Festival, but they had a hard time finding a place to rehearse because they made so much noise and they were repeatedly thrown out of rehearsal rooms. Eventually they decided they had to go somewhere with no neighbors, and drove up to Arthur's Seat, the extinct volcano that overlooks Edinburgh, and they put the piece together there, in the open air, up on the mountain.

"So, in a way, Stomp too shaped high up on the slopes of an extinct volcano," Cresswell says.

As for McNicholas, he says meeting American musician and filmmaker Quincy Jones was one of the highlights of his career.

Jones asked them to perform at the Oscars in 1996. It was to be a tribute to sound effects in cinema, and it was a rare time for sound effects to be used during a live performance.

Another show they were involved in was at the Emmys the following year.

Later, and with the support of Jones, they were able to fulfill one of Stomp's ambitions, and do a short film based on the opening routine of the show: Brooms.

Separately, in 2004, they held a big party in New York and all the original members of Stomp flew in from all over for it.

"Everyone agreed, except one, Nick Dwyer, who was the first of the original cast to retire, and was also loath to fly.

"Despite the fact that we toured the world together, he never got over his distaste for air travel, and now he was quite happy to say no.

"It was a great night, a great party, and we all celebrated into the night. But wherever we went that night, we carried a life-size photograph of Nick, so that in the photographs, at least, it looked like we were all there," says McNicholas.

For now, Stomp has an open call and anyone can try to join.

The two creators teach simple rhythms and choreography and look for "people with a spark, an open mind, and a different approach".

Phil Batchelor auditioned for Stomp in the summer of 2007. And he performed in Beijing in 2016.

"I went onto the Stomp website after watching the show in London and clicked on a link that said 'Do you want to be part of Stomp? Click here. I clicked the link and a couple of months later I was offered an audition with hundreds of other people from around the country," says Batchelor.

Nicola Chang, who used to perform with the West End Company, joined Stomp in 2016 after attending an open audition.

While he was a percussion student growing up in Hong Kong, his teacher showed him the Stomp DVD and he was immediately drawn to the show.

"I loved the energy, the musicality and the inventiveness," he says.