Affluent Chinese manufacturing base shares opportunities with the world 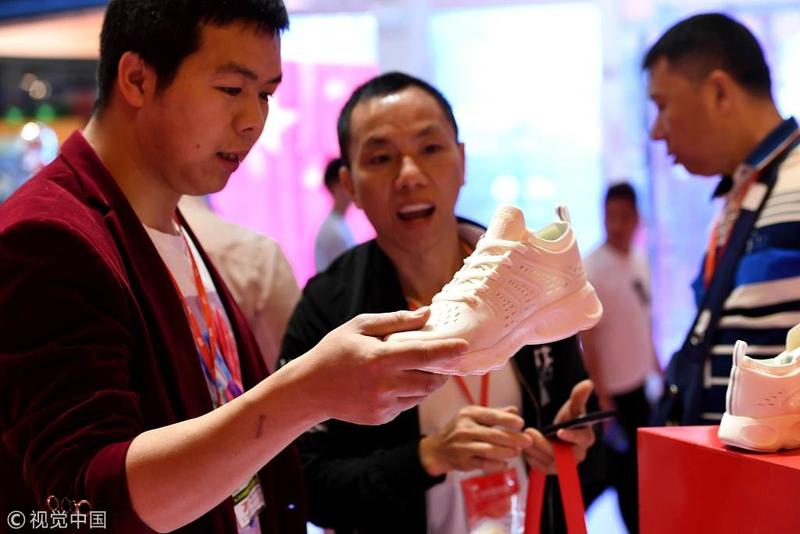 In this undated photo, a pair of shoes at a booth in the 20th Jinjiang Footwear Exposition in Jinjiang, Fujian province. (PHOTO / VCG / CHINADAILY.COM.CN)

"The city is the largest shoe manufacturing base in the world, where most brands have their production lines. You can find anything from upstream to downstream resources in the shoe and textile industry in Jinjiang," said Kim.

Kim opened his design workshop in Jinjiang in early 2017, cooperating with Hotpotato, an outdoor shoe company in Guangzhou, and the US-based Sketchers to develop new shoes.

His new designs provide a dual function for both outdoor and indoor use and feature removable insoles.

There are hundreds of foreign designers like Kim working in the shoe industry in Jinjiang. Some work directly for Chinese leading shoe brands like ANTA, Lilanz, and 361 Degrees, all based in the city.

Jinjiang-based ANTA has become the world's third-largest sports brands by market value, together with Nike and Adidas

Litin Jain from India said he and many other foreign purchasers source shoe-making materials in Jinjiang.

"I came here to have a look at the range of new materials to make new shoe designs in India," he said. He believes the city has obtained an edge in quickly developing technology for the industry.

Lin Hai'ou, CEO of Hai'ou Shoemaking Co, where Jain is searching for materials, said the company used to see only domestic purchasers. But now, many of its buyers are from Vietnam, Bangladesh, Indonesia, and India.

"We have focused on developing environmentally friendly raw materials with new functions and fair prices for shoe-making, which make our products attractive to foreign companies," he said while scratching a piece of shoe-making fabric with a blade - the material remained undamaged.

SinceTech, a manufacturer in Jinjiang, sells nylon mesh for sports shoes. It has become a supplier for international brands such as Adidas, Reebok, Sketchers, and New Balance, as its independently-developed shoe material has become the most-sought-after material for making sports shoes.

Xu Jinsheng, CEO of the company, said the proportion of international orders has increased from 10 percent to 60 percent, with the invention of the material in 2013.

"To better address the needs of overseas customers, we have set up factories overseas and two representative offices in the US," said Xu.

Jinjiang-based ANTA has become the world's third-largest sports brands by market value, together with Nike and Adidas. The Chinese firm has signed NBA star Kevin Garnett as the brand's endorser. It is also the official sponsor for the Beijing 2022 Winter Olympics and Paralympics.

Liu Wenru, Party chief of Jinjiang, said the future of the city relies on further opening-up and more connection with international industries. "Internationalization can help share the city's charm with people from the all over the world."

"By setting up overseas factories, we can familiarize ourselves with foreign markets, offering job opportunities there and contributing to the world's economy," said Xu Teji, vice president of the chamber of commerce in Jinjiang.

"Chinese firms have become more and more confident in the international arena. They have kept improving themselves while creating more opportunities for the world," said Xu.