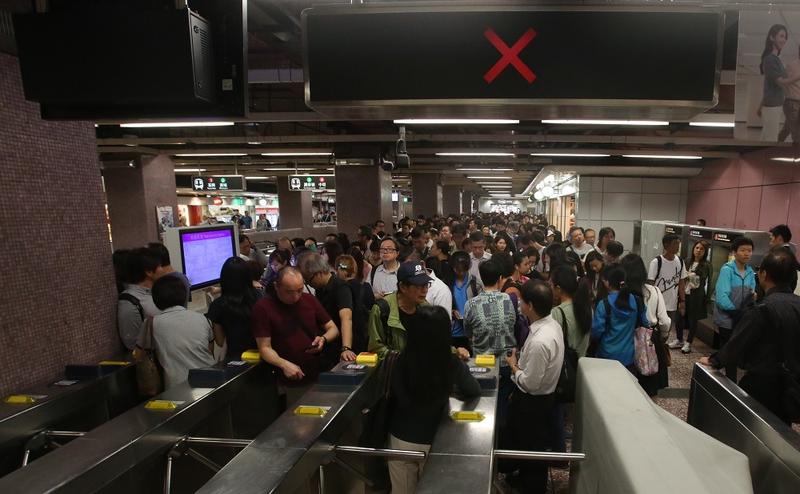 HONG KONG - Hong Kong's government announced it would close schools on Thursday over safety concerns as radical protesters disrupted traffic across the Asian financial hub for the third straight day on Wednesday.

Commuters packed into the first trains Wednesday morning as protesters continued to impede rush-hour traffic. MTR services were suspended and numerous bus routes were altered during the day.

The protests, stemming from the extradition bill incident, have been raging for five months now. Hong Kong Chief Executive Carrie Lam Cheng Yuet-ngor has vowed not to give in to violent protests.

Radicals set up barricades and destroyed public transportation facilities across Hong Kong, with a number of roads blocked in Kowloon and the New Territories affecting dozens of bus services, according to the Hong Kong police and transport authorities.

Only 100 out of around 650 bus service routes in Hong Kong were partixllay operational as of Wednesday morning, according to Chan.

Traffic lights in different districts were also interfered with. Transport authorities said 220 sets of damaged traffic lights were being repaired across the districts, advising people to pay special attention to road safety at affected junctions.

Chan said vandalism of public transport facilities were "extremely dangerous," as well as acts of setting fire to train coaches, throwing fire bombs at running trains and destroying rail tracks, all of which could result in serious casualties.

The Chinese University of Hong Kong announced an abrupt end to the current semester, saying that all remaining classes would be canceled. The semester was originally scheduled to end mid-December.

Meanwhile, the Hong Kong University of Science and Technology said that classes would be conducted online starting next week until the end of the term, given the escalation of unrest.

The Hang Seng University of Hong Kong also announced to cancel classes from Nov 14 to 16 in view of the continued social situation and traffic concerns. 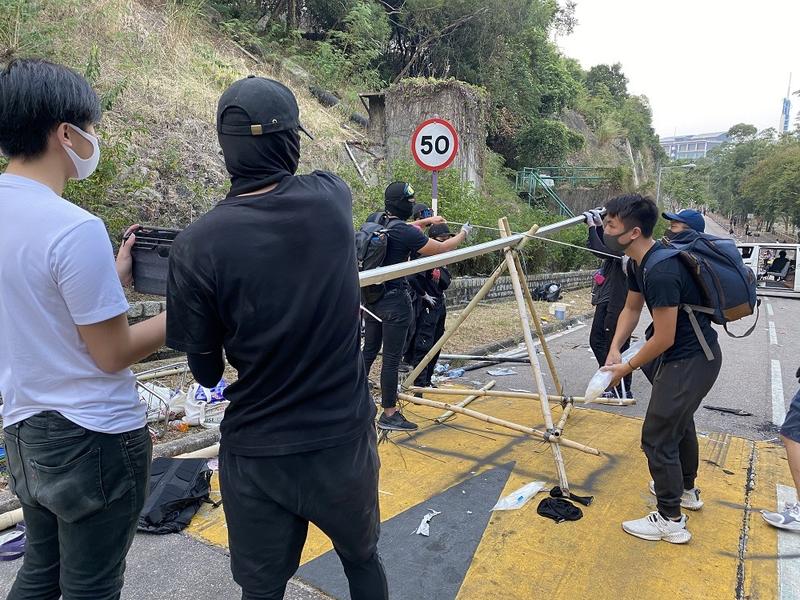 Black-clad radicals putting together a crossbow-type structure on a road at the Chinese University of Hong Kong, Nov 13, 2019. (PHOTO / CHINA DAILY)

Black-clad rioters were seen putting together a crossbow-type structure which resembles a giant catapult at the Chinese University of Hong Kong. 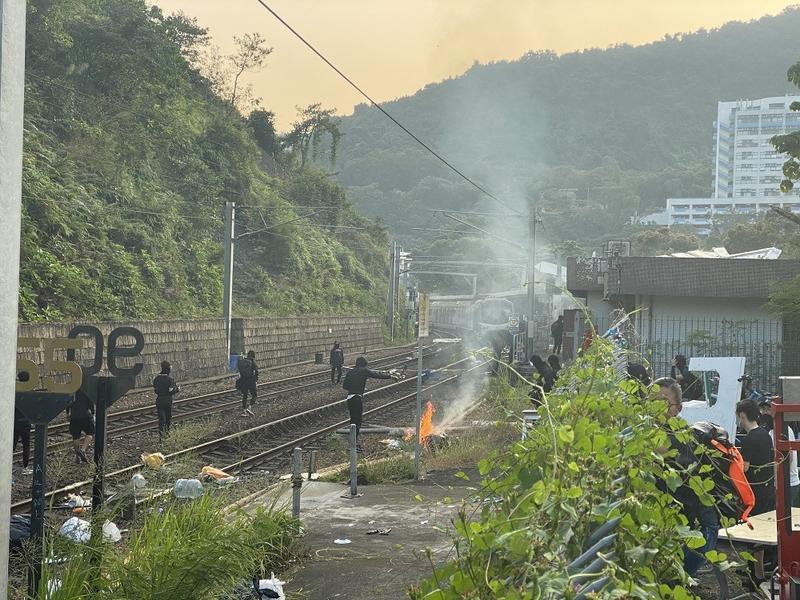 Black-clad rioters set fire on railway tracks near University Station and vandalized a train at the platform.

The President and Vice-Chancellor of the University of Hong Kong Xiang Zhang has invited students to join him for a dialogue on next Wednesday.

In a letter to students, Zhang said the dialogue would be an opportunity for students and teachers to have an honest, constructive and mutually respectful exchange of views about recent events in Hong Kong.

He said he hopes the talks would help Hong Kong to find a way to move forward.

Hong Kong police have assisted a group of mainland students at the Chinese University of Hong Kong who were unable to leave school because of roadblocks set up by protesters. A police boat transported the students to a safe location, and they were left to find their own transportation from there, according to a Facebook posting by the Hong Kong police.

Oxfam Hong Kong said it was canceling its popular Trailwalker event, the city’s biggest hiking fundraiser, citing unforeseeable developments in recent social events and the ongoing traffic situation. The organization said it had made the “difficult decision” after careful consideration as it prioritized the safety of participants and volunteers. It had been scheduled for Friday through Sunday.

All schools in Hong Kong will suspend classes on Thursday due to transportation and safety reasons, the Hong Kong Education Bureau announced.

In a statement, a spokesperson for the Education Bureau strongly condemned violent acts that deliberately endangered the safety of students and deprived them of their basic right to study.

Some school buses were vandalized during the violence in the past two days, according to the spokesperson. Some schools even received threats.

Schools are required to keep their buildings open to the students during the suspension, in case parents need to send their children to school, according to the statement.

The Hong Kong Association of Banks announced that some bank branches in various districts were closed and services are suspended on Wednesday. In a statement, the association expressed regret over the situation and apologized for the inconvenience caused to customers. 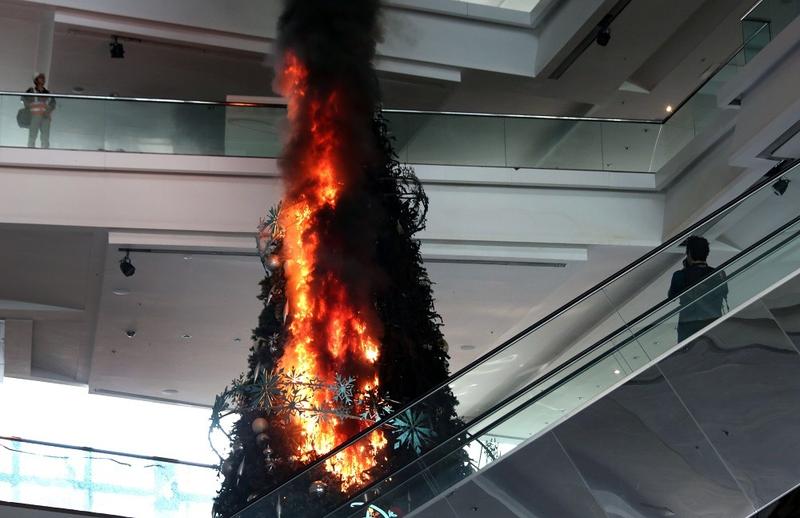 A Christmas tree at Festival Walk in Kowloon Tong is set on fire by protesters again on Nov 13, 2019. (PHOTO / CHINA DAILY)

The Christmas tree at Festival Walk in Kowloon Tong was set on fire by protesters again.

Crowds of people began gathering in the Central financial district, an area popular with tourists and shoppers and usually packed with office workers at lunchtime. Some protesters set up a barricade at the normally busy intersection of Des Voeux Road and Pedder Street, a corner of the city surrounded by luxury stores and near the Landmark mall.

MTR Corp said on its website that the entire service of Tsuen Wan Line, and partial services of the West Rail Line and Kwun Tong Line have been suspended. Hung Hom and Tung Chung stations were also closed.

There were long queues outside some MTR stations as commuters waited for buses or taxis. 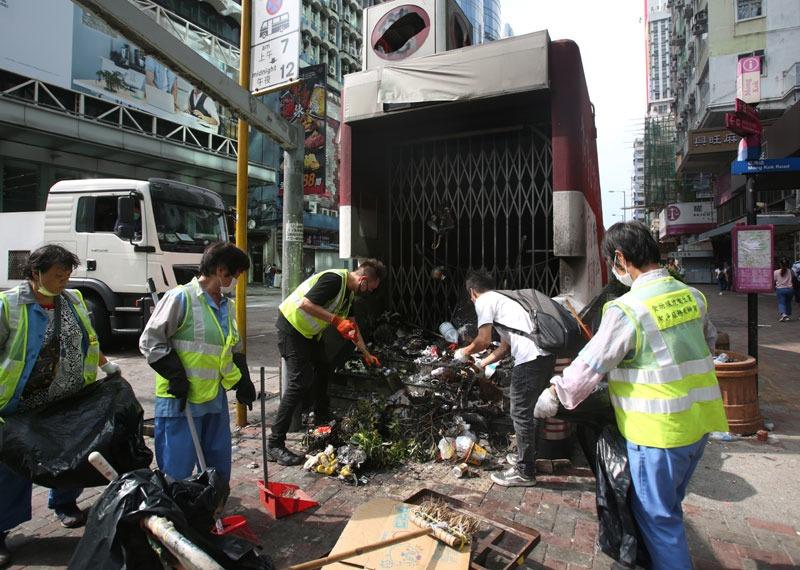 Workers from the Food and Environmental Hygiene Department clear trash and debris piled up by protesters at an entrance of Mong Kok MTR station, Nov 13, 2019. (PHOTO/CHINA DAILY)

11am Protesters gird for campus showdown

Hundreds of black-clad protesters returned to the campus of Chinese University, where the city saw some of the fiercest clashes between police on the previous night.

Protesters had blocked the Tolo Highway and occupied bridge above it, where they had stockpiled bricks and petrol bombs.

Major bus operator the Kowloon Motor Bus Company announced it could only offer limited services along 19 routes on Wednesday while the New World First Bus and Citybus said only 48 routes are running.

The Labor Department urged employers to make flexible work arrangements if employees are unable to work on time due to disrupted road traffic or public transport services.

The Education Bureau said that parents could decide whether they want to send their children to schools Wednesday because of traffic disruptions, according to a statement issued by the HKSAR government on its website.

It called on all students to put safety first at all times and not to take part in unlawful activities.

"They must not wander on the streets or go to potentially dangerous places, and should never participate in unlawful activities," according to the statement.

The bureau urged schools to keep their premises open, take proper care of students who have arrived at school, maintain communication with parents, and allow students to return home only under safe conditions. 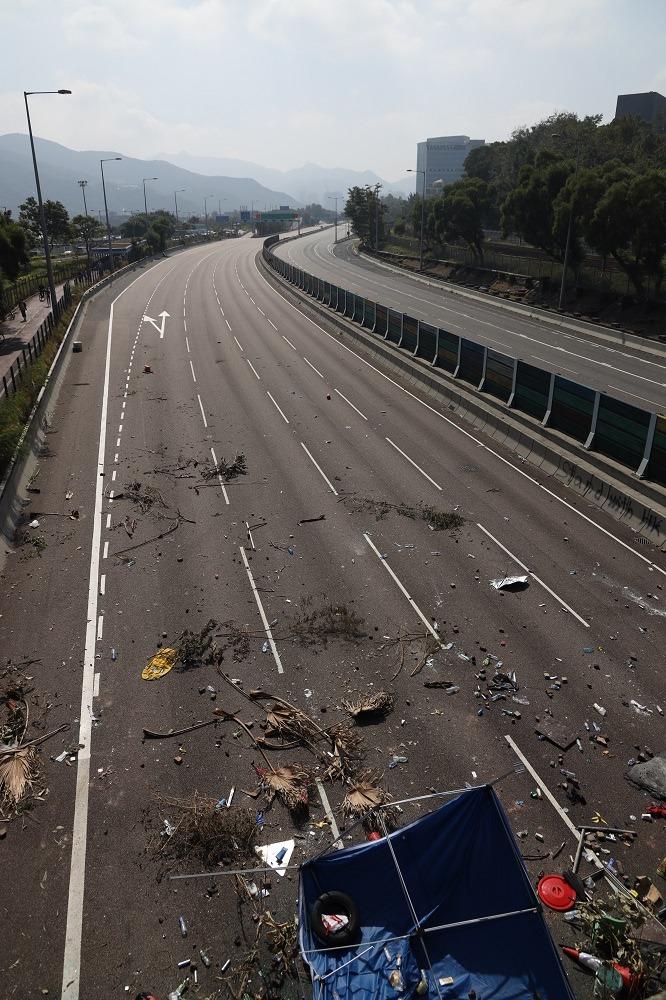 Tolo Highway remains closed on Nov 13, 2019, as rubbish left behind by protesters on Nov 12 are yet to be cleared away. (PHOTO / CHINA DAILY)

Some bus services were canceled or diverted as Tolo Highway is yet to be re-opened. Traffic on major road including the section of Nathan Road between Prince Edward Road West and Waterloo Road and the section of Argyle Street near Nathan Road were also affected, according to a government press release issued on Wednesday morning.

Mapletree North Asia Commercial Trust said in a corporate filing that its Festival Walk mall in Kowloon Tong sustained extensive damage in protests Tuesday. Protesters, among other things, smashed glass panels at the entrances and set fire to a Christmas tree. The mall will be closed on Wednesday as the company assesses the damage. 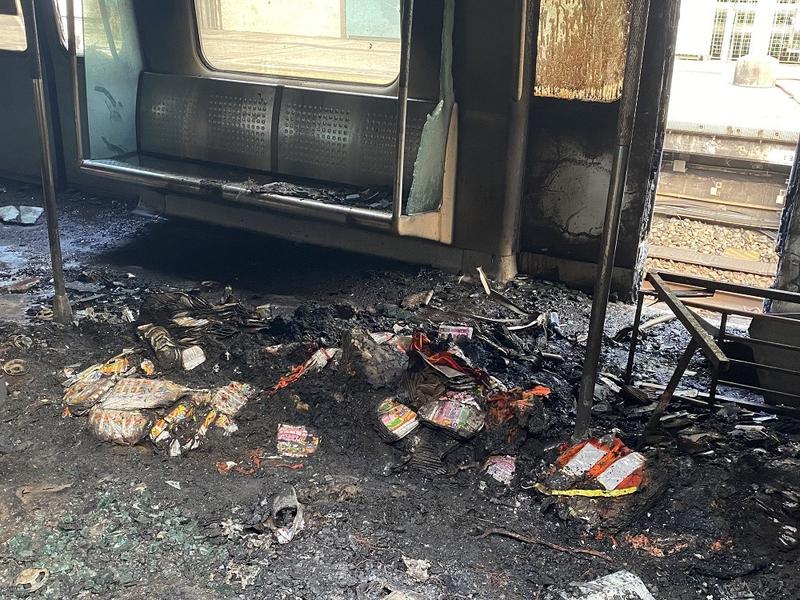 The aftermath of a badly burnt cabin of a stationary train at University Station, Nov 13, 2019. (PHOTO / CHINA DAILY)

Rioters set a police vehicle on fire, assaulted a truck driver and put nails on roads.

A large group of masked rioters besieged a police vehicle and set it on fire on Tai Chung Kiu Road, according to footage released by media. It was not clear whether there were police officers in the vehicle.

Another video clip showed rioters beating up a truck driver with blood all over his face after stopping the truck with barricades. 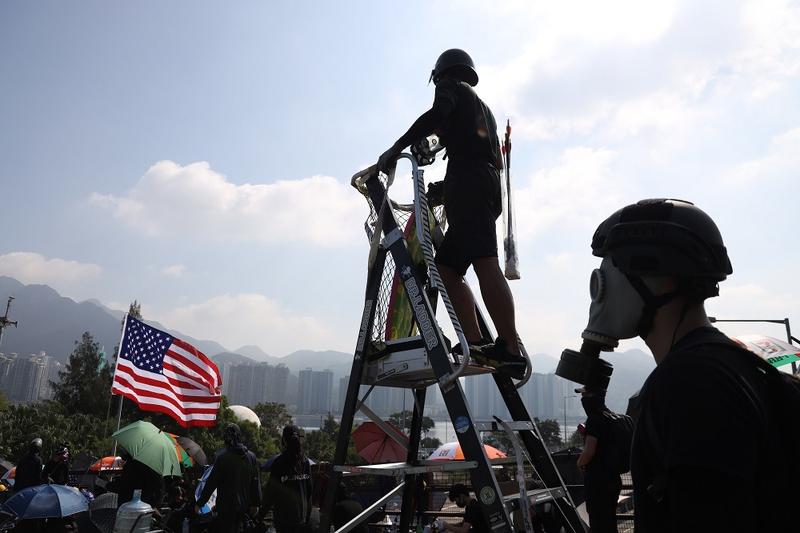 Barricades erected by radicals were hit by gasoline bombs and caught on fire, and an explosion was even heard at the scene. Trees and a sedan were also set ablaze.

In a statement, the police warned radical protesters to stop all illegal, violent acts and leave the scene immediately, and said they had to use minimum necessary force during the operation after repeated warnings went in vain.

The CUHK has announced another day of suspension of classes for Wednesday as roads were cut off and facilities were seriously damaged by violent protesters.

The Hospital Authority said 10 men and 8 women injured in violent incidents were sent to hospital as of 5:00 pm Tuesday.