Outside meddling has colored protests 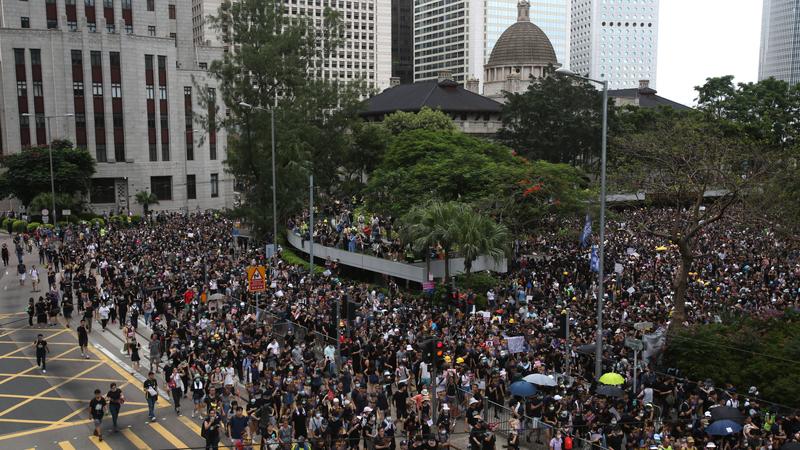 Following the storming of the Legislative Council and the vandalizing of the Liaison Office of the Central People's Government in the Hong Kong Special Administrative Region, unapproved protests on Saturday and Sunday have brought the lawlessness surrounding the recent anti-extradition law amendment to a new high. Unlike previous protests, the weekend rallies were not approved by the police because of the escalating violence in the associated areas - Yuen Long on Saturday and Western District on Sunday.

However, ban-defying protesters still gathered. And, just like in previous protests, violence broke out later with rioters wearing helmets and face masks, some armed with metal rods, hurling bricks at police officers.

Such illegal assemblies, not to mention the ensuing violence, are a clear demonstration of the protesters' total defiance of the law. They no longer bother to pretend that their acts are lawful and peaceful expressions of opinions. Without police approval for the protests, they broke the law from the very beginning.

The anti-extradition law amendment campaign has been depicted by its supporters and the Western media, which has publicized and glorified them all along, as spontaneous and having no central command. That is what the forces behind it want the world to believe. Yet judging from the preparation, targeting strategies, riot tactics and abundance of supplies, it takes naivety akin to simplemindedness to truly believe these activities are not being carefully orchestrated.

While the foot soldiers were charging, some of the figures behind the scenes popped up in the crowds. A media tycoon who recently met with United States Vice-President Mike Pence was spotted on Saturday, while a number of opposition legislators stood between the police line and the protesters as if they were negotiators. They kept asking police officers to give the protesters time to retreat and leave, while in fact they were buying them for the mob to regroup.

What is happening in Hong Kong is no longer the airing of real or imagined grievances. It is of the same hue as the color revolutions that were instigated in the Middle East and North Africa - local anti-government elements colluding with external forces to topple governments utilizing modern communication technology to spread rumors, distrust and fear.

What is different here is that the central government as well as the majority of Hong Kong residents will stand firmly behind the SAR government and the police to foil their schemes.