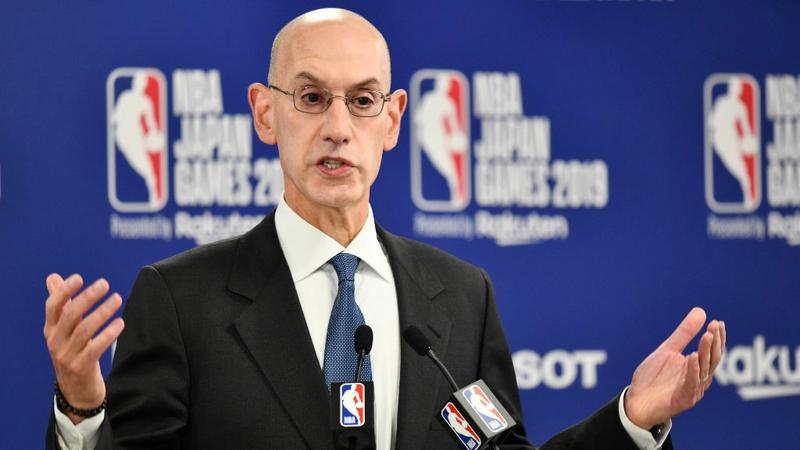 NBA Commissioer Adam Silver speaks during a press conference prior to the NBA Japan Games 2019 between the Toronto Raptors and Houston Rockets in Saitama on Oct 8, 2019. (KAZUHIRO NOGI / AFP)

Chinese observers condemned the National Basketball Association for applying double standards in defending “free speech” after a controversial tweet from an executive with the Houston Rockets basketball team.

The backlash to the now-deleted tweet of the team’s General Manager Daryl Morey supporting protesters in Hong Kong is roiling the decadeslong relationship between the NBA and its biggest overseas market. Fans, observers and relevant organizations are questioning the league’s support for Morey’s tweet in the name of protecting “free speech rights”.

NBA Commissioner Adam Silver said in a statement released on Tuesday that the league’s defense of free speech won’t change, even with Morey’s social media post widely considered in China as interference in the country’s internal affairs.

“It’s inevitable that people around the world — including from America and China — will have different viewpoints over different issues,” Silver said in the statement issued before a preseason game in Tokyo. “The NBA will not put itself in a position of regulating what players, employees and team owners say or will not say on these issues.”

Managing arguably the most-followed NBA franchise in China in large part thanks to its being the former team of legendary Chinese basketball player Yao Ming, Morey infuriated Chinese fans by tweeting an image that read “Fight for Freedom. Stand with Hong Kong”. That was a slogan often shouted by rioters during months of violent protests in Hong Kong.

Observers suggested the NBA has failed to recognize the seriousness of the matter in Hong Kong, where protests have increasingly grown violent and become a threat to China’s territorial sovereignty.

“Silver and the league appear naive in this case and appear to be still not able to understand that they are applying double standards in handling the issue,” said Su Qun, chief editor of twice-weekly newspaper Basketball Pioneers and a renowned sports commentator, on his Weibo account on Tuesday.

“They haven’t realized so far that the boundaries for free expression regarding sensitive issues are different in China and the US. There are different taboos in other countries and cultures rather than just ethnicity, gender and religion in the US, which are nonnegotiable.”

“There’s nothing wrong with individuals expressing their opinions on condition that they have gained a full understanding of the matter. Unfortunately, it’s not the situation in this case as they chose to speak not knowing what’s really going on in Hong Kong,” Hong said.

“It won’t work if you exchange and cooperate with China but don’t understand China’s public opinion,” he said in a news briefing.

Just two days ahead of a preseason game between the Los Angeles Lakers and the Brooklyn Nets in Shanghai, both China Central Television and internet giant Tencent announced on Tuesday that they had canceled broadcasting of two exhibition games between the teams, originally scheduled for Thursday in Shanghai and two days later in Shenzhen, Guangdong province. State-owned television network CCTV also said it will review all cooperation with the NBA.

The league also canceled a plan to send NBA legends and officials to a Shanghai primary school for a charitable donation ceremony on Tuesday afternoon.

Wang Qingyun in Beijing contributed to this story.