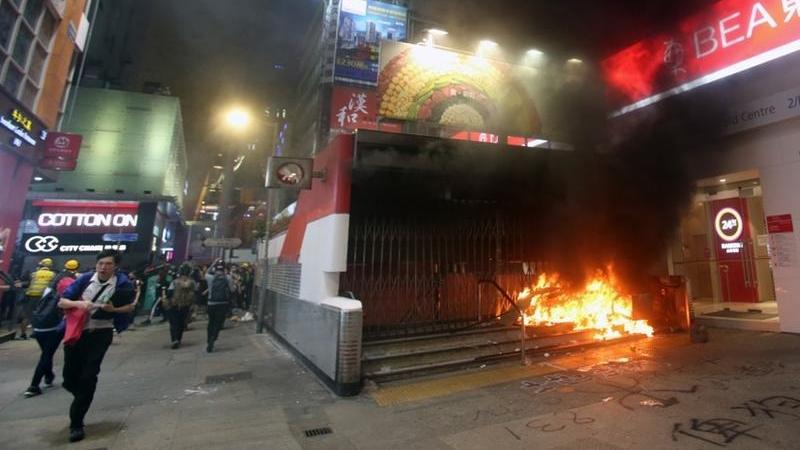 Fire rages at an exit of the Mong Kong MTR Station after violent radicals went on a rampage and committed arson on Oct 27, 2019. (PHOTO / CHINA DAILY)

HONG KONG - Amid increasingly ugly violence by black-clad riotous mobs in Hong Kong since June, some online platforms have become places where riots are plotted, rumors are spread and "black terror" is nurtured.

Among them, the encrypted instant messaging app Telegram and online forum LIHKG are considered the most notorious ones, cashing in on Hong Kong's plight as radicals feast on a plethora of incendiary calls, obscenities, and tutorials on committing crimes.

Rioters mainly use Telegram for plotting and communication, and LIHKG for generating rallying cries and other propaganda to glorify violence.

It took as little as a few days or even hours to materialize a rioting activity by using Telegram and LIHKG.

Certain procedures were followed: Before riots started, organizers would release offensive tactics, including assigning roles, positions and equipment to participants; as riots began, they would monitor police deployment and operations in real-time and prepare backup resources and emergency responses for potential arrests; and after the riots, they had vehicles ready to pick up the key frontline rioters.

The core decision-making group on Telegram is, in fact, radicals' command center of the so-called "spontaneous" protests.

On Telegram, small groups were created to monitor police movements, collect and distribute materials, study how to deal with the Hong Kong Special Administrative Region (HKSAR) government and the police, dox personal and family information of police officers, and recruit propaganda personnel.

They continuously came up with action plans via different groups or channels on Telegram and LIHKG, set the direction and agenda for the demonstrations, and then instigated more people and netizens to participate.

As a protest or a riot unfolded, Telegram was then widely used for real-time contact, instant sharing and spreading instructions and other related information among different groups on the two platforms to support on-site demonstrators.

For their online propaganda, demonstrators used multiple languages to glorify themselves and defame the police.

A propaganda advisory group involving foreigners is active on Telegram to help demonstrators modify their slogans and other propaganda materials.

After wreaking havoc, organizers and participants would poll on LIHKG to assess its effects and adjust their tactics accordingly. Some recounted their own experience, telling others the do's and don'ts. Some drummed up statements to agitate the public for the next round of escalated actions.

While used by radicals to plot violence, Telegram and LIHKG have also become the online training camp for rioters, with substantial posts and how-to manuals inciting violence.

Telegram and LIHKG are flooded with illustrations and videos from overseas teaching radicals how to make and use Molotov cocktails, smoke bombs, projectiles with corrosive powder or liquid, giant slingshots and homemade bombs and other homemade weapons. 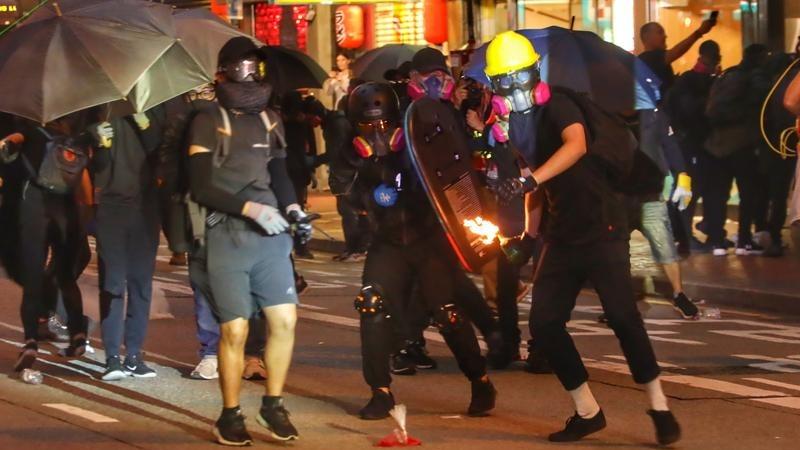 In a series of raids, Hong Kong police have busted several cases related to bomb-making in recent months.

Besides posts about weapon-making techniques, Telegram and LIHKG also provide platforms for rioters to organize and receive training before taking to the streets.

For example, a post on LIHKG analyzed the riot control tactics of the law enforcement forces, with elaborate illustrations and videos of crowd control training, to help rioters fight the police and avoid arrests.

Telegram groups and channels are also full of posts recruiting people to take part in fight training taught by foreign trainers, or advocating vandalism and vigilante attacks on those who have differing opinions.

These online tutorials soon became crimes on the street.

Advocated techniques were widely used by rioters on the ground to assault police officers and police stations.

On Oct 1, a rioter used an iron pipe to hit the right arm of a police officer who had pulled out a gun as a warning. The attack was exactly one of the tactics so-called "experts" on LIHKG teach on assaulting police.

In another attack on Oct 13, a rioter slashed the neck of a police officer from behind with a box cutter, which resembled the methods for cut-throat attacks introduced on LIHKG.

Since June, as violence in Hong Kong intensifies, the Hong Kong police force has become animosity targets. A large number of frontline police officers and their families became victims of cyberbullying.

In this July 1, 2019 photo, protesters try ram a trolley laden with flattened cardboard boxes in an attempt to shatter the glass-fronted entrance to Hong Kong's Legislative Council complex in Admiralty. (PHOTO / CHINA DAILY)

Privacy information of more than 2,600 officers and their families, illegally obtained, has been disclosed in detail on Telegram, LIHKG and other social media, including their home address, names of their spouses, and schools of their children, according to the Hong Kong police.

While used by radicals to plot violence, Telegram and LIHKG have also become the online training camp for rioters, with substantial posts and how-to manuals inciting violence

Threats against police officers like "kill their whole family" and "their wives and children will be harmed" are all over the two platforms, while radicals instigated harassment, cyberbullying or even attacks.

In the prolonged chaos, rumors were cooked up and spread on Telegram and LIHKG to glorify violent acts, defame police officers, and disseminate misinformation and hatred against police.

When rioters plotted violence or disseminated rumors via Telegram or LIHKG, they intentionally used anonymity or pseudonyms to hide their identities.

Under Hong Kong's Crimes Ordinance, a seditious intention, such as bringing hatred or contempt against the government, promoting feelings of ill-will and enmity between different classes of the population, or inciting violence, is liable to imprisonment once convicted.

"Cyberspace should also be subject to legal regulation. The premise of a free market is that everyone abides by the law," said Leung Mei-fun, a member of the HKSAR Legislative Council.

She noted that Hong Kong has enough legal basis for punishment, referring to certain recent law-violating online content that abets crimes or teaches how to make bombs. 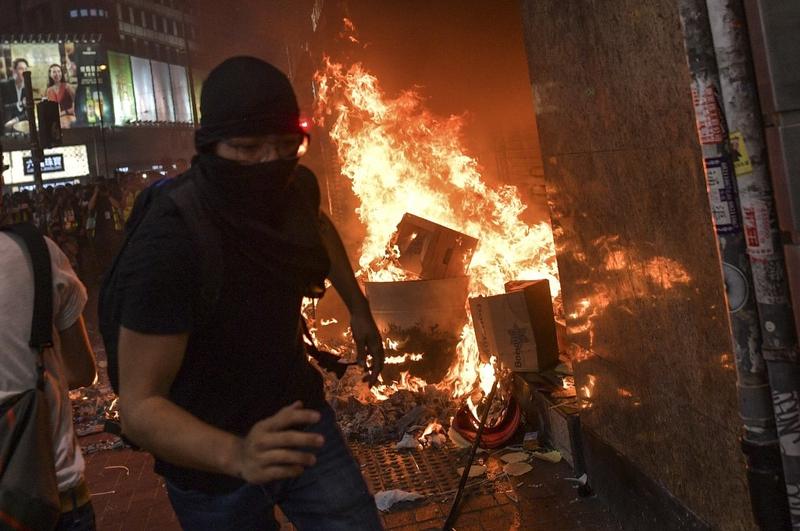 Protesters burn items at the Causeway Bay metro station entrance in Hong Kong on Oct 4, 2019, as people hit the streets after the government announced a ban on face masks. (NICOLAS ASFOURI / AFP)

The rule of law is the cornerstone of Hong Kong's success, experts said, adding that relevant ordinance applies to cyberspace too and any law violation must be investigated, regardless of whether it is online or offline.

READ MORE: The truth behind rioters who call themselves 'the valiant' in HK

Leung cited similar cases in common law jurisdictions that offer examples to follow. For instance, US websites would be shut down if they spread hate speech against the United States. Also, last week, a Spanish judge ordered the closure of a website suspected to have organized street demonstrations through social media and encrypted applications.

Ma Yan-kwok, barrister and chairman of the Hong Kong Legal Exchange Foundation, said some online forums have overstepped the bottom line of freedom of speech and are suspected of an offense of sedition, adding the use of the internet to instigate violent assaults is an even more serious felony.

He said in Hong Kong, the major problem is that law enforcement is too weak to deter crimes, where legal procedures are lengthy and uncertain. The behind-the-scene suspects are usually left unidentified.

Refuting the rhetoric that defends the online crimes with freedom of speech, Leung said as stipulated in the international conventions on human rights, freedom of speech has always been within the framework of legal constraints and should be properly restricted for the protection of national security, public order, public health or morals.