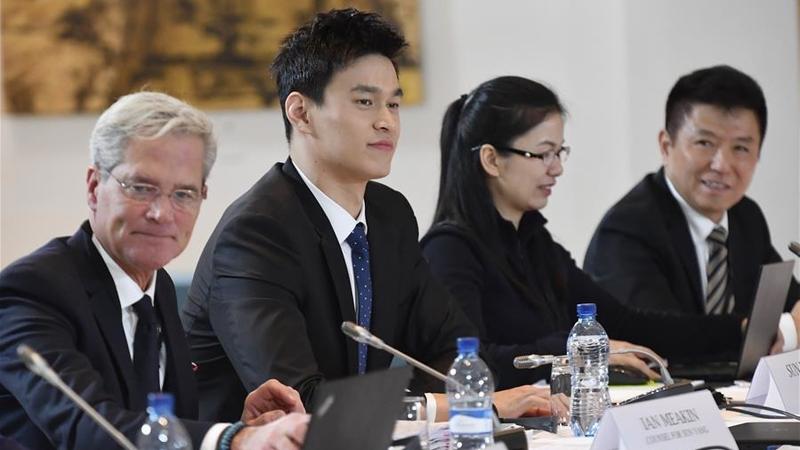 HANGZHOU - One of the three IDTM doping control testers in the Sun Yang case said he was not a trained professional Doping Control Assistant (DCA), but a construction worker.

Three-time Olympic swimming champion Sun Yang declared his innocence at a Court of Arbitration for Sport (CAS) public hearing held in Montreux, Switzerland on November 15, after the World Anti-Doping Agency (WADA) appealed against him and swimming world governing body FINA over FINA's previous decision in favor of Sun on his alleged anti-doping rule violations.

The DCA noted that he and the DCO had not seen each other for a long time, having met at a middle school reunion dinner during the Spring Festival in February last year

The DCA, who insisted on anonymity, revealed he had provided his testimony by a written letter in Chinese to CAS and WADA several days before the public hearing.

"I am a builder and I am always busy at work, day and night. No one ever trained me about the doping test, and it is unnecessary for me to undertake such training."

"I agreed to give my words at a video conference before the public hearing as they requested. I was ready, but no one had ever contacted me about this," he said.

In an earlier interview with Xinhua in January, the DCA said he came to provide temporary help when asked by his middle school classmate, the DCO (Doping Control Officer) from WADA contractor IDTM, on the night of September 4, 2018.

The DCA noted that he and the DCO had not seen each other for a long time, having met at a middle school reunion dinner during the Spring Festival in February last year.

"She called me to pick up her at the railway station and drove her to Sun's home at that night. In fact, there was another lady with the DCO at the station. She was the BCA (Blood Collection Assistant). "

"Before we entered the test room, the DCO asked me to escort Sun into the bathroom. As my understanding, she was asking me to watch Sun Yang urinating. Because both of them were ladies, I agreed," recalled the builder.

"Sun is a big star in China and it was my first time being near him. I was excited. I took a couple of pictures outside the room with my cellphone. When I tried to take pictures of him again when we were sitting in the room, Sun told me not to do so."

"Then he asked every one of us to identify ourselves. I showed my ID card. Sun pointed out that I was not an accredited tester and should not stay in the test room," he said.

During the 11-hour marathon public hearing, Sun explained that he stopped cooperating with the test process because of the unprofessional behavior by the DCA. Sun later found out that the three IDTM testers lacked sufficient authorization and credentials.

None of the IDTM doping testers appeared at the CAS public hearing on November 15, prompting  Sun to question: "Do you have the guts to show up and tell the truth here in front of the public?"

The DCA said he left the test room and waited in the clubhouse hall, just outside the test room, adding that the DCO came out to him several times with an iPad and showed him its English contents.

"I did not know English and did not understand what was talking about. Then I gave the iPad back to her. I didn't know what happened in the test room," the DCA said.

"I knew nothing about the doping test and nothing about my role that night. I just came to help my middle school classmate at her request. I am a builder," he added.