SpaceX: Rocket for moon, Mars and NY-to-Shanghai in 39 mins 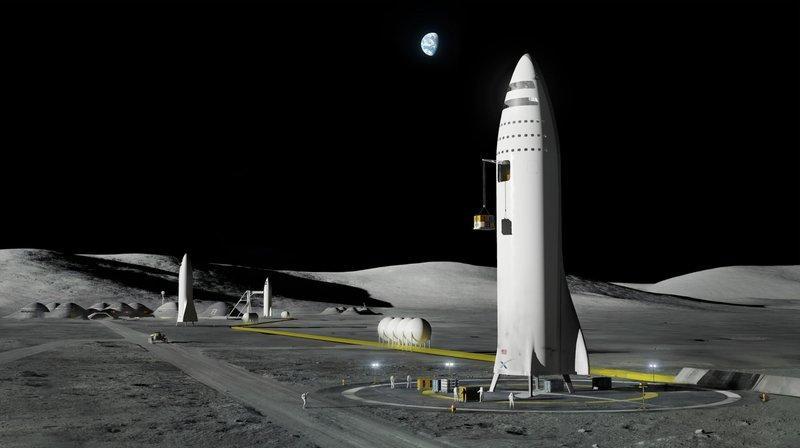 This artist's rendering made available by Elon Musk on Sept 29, 2017 shows SpaceX's new mega-rocket design on the Earth's moon. (SPACEX VIA AP)

CAPE CANAVERAL, Fla. — SpaceX chief Elon Musk’s elaborate plan for a mega-rocket to carry astronauts to Mars may have some down-to-Earth applications.

At a conference in Australia on Friday, Musk said if you build a ship capable of going to the moon and Mars, why not use it for high-speed transport here at home. He proposes using his still-in-the-design phase rocket for launching passengers from New York to Shanghai in 39 minutes flat.

“Most of what people consider to be long-distance trips would be completed in less than half an hour,” Musk said to applause and cheers at the International Astronautical Congress in Adelaide.

A seat should cost about the same as a full-fare economy plane ticket, he noted later via Instagram.

Friday’s address was a follow-up to one he gave to the group last September in Mexico, where he unveiled his grand scheme for colonizing Mars. He described a slightly scaled-down 348-foot-tall (106-meter-tall) rocket and announced that the private space company aims to launch two cargo missions to Mars in 2022.

“That’s not a typo,” he said, pausing, as charts appeared on a large screen. “Although it is aspirational.”

Two more cargo missions would follow in 2024 to provide more construction materials, along with two crewed flights. The window for launching to Mars occurs every two years.

For the approximately six-month, one-way trips to Mars, the SpaceX ships would have 40 cabins, ideally with two to three people per cabin for a grand total of about 100 passengers. Musk foresees this Mars city growing, and over time “making it really a nice place to be.”

Scott Hubbard, an adjunct professor at Stanford University and a former director of NASA’s Ames Research Center, calls it “a bold transportation architecture with aspirational dates.” A demonstration of some sort in the 2020s will add to its credibility, he said in an email. And while more details are needed for life-support systems, “Kudos to Elon and SpaceX for keeping the focus on humans to Mars!”

Former NASA chief technologist Bobby Braun, now dean of the college of engineering and applied science at the University of Colorado at Boulder, also sees Musk’s plan as a step in the right direction, building on technologies SpaceX already has demonstrated, like reusable rockets.

“While the timeline and capabilities are certainly ambitious, I’m bullish on US industry’s ability to carry out challenging and far-reaching goals,” Braun wrote in an email. “It’s great to see the private sector lead in this way, and I hope we see more of it.”

NASA is charting its own path to what it calls the “Deep Space Gateway,” beginning with expeditions in the vicinity of the moon in the 2020s and eventually culminating at Mars. The space agency has handed much of its Earth-orbiting work to private industry, including SpaceX, Orbital ATK and Boeing.

This artist's rendering made available by Elon Musk on Sept 29, 2017 shows SpaceX's new mega-rocket design at the International Space Station. (SPACEX VIA  AP)

Earlier Friday in Adelaide, Lockheed Martin presented its vision for a “Mars Base Camp” in partnership with NASA. Astronauts could be on their way in about a decade, the company said. This first mission would orbit the red planet, rather than land.

Musk intends to finance his $10 billion Mars endeavor by using a rocket that’s smaller than the one outlined last year. Fewer engines would be needed: 31 versus the originally envisioned 42. Its lift capability would be 150 tons, more than NASA’s old moon rocket, the Saturn V.

He wants one type of booster and spaceship that can replace the company’s current Falcon 9 rocket, the soon-to-fly Falcon Heavy rocket designed for heavier satellites, and the Dragon capsule presently used to deliver cargo to the International Space Station, and, as soon as next year, station astronauts. 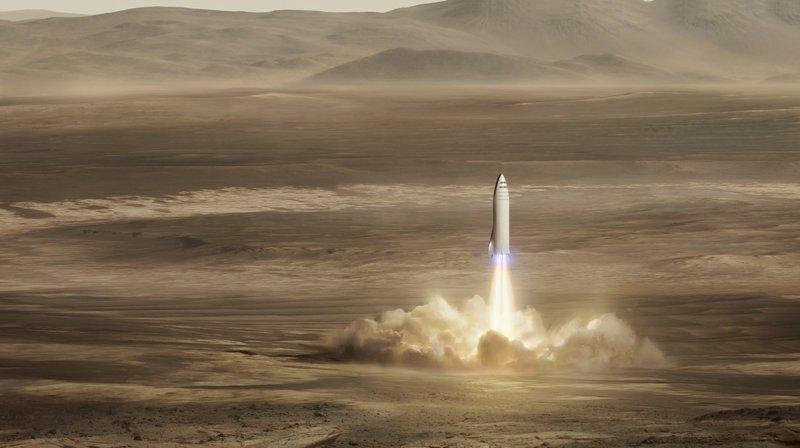 This artist's rendering made available by Elon Musk on Sept 29, 2017 shows SpaceX's new mega-rocket design on Mars. (SPACEX VIA AP)

That way SpaceX can put all its resources toward this new system, Musk said. Revenue from launching satellites, and sending supplies and crews to the space station, could pay for the new rocket, he said.

Musk said the same spaceship for moon and Mars trips — long and cylindrical with small shuttle-like wings — could fly to the space station. He said the mega-rocket could be used to establish a lunar settlement, with spaceships being refueled in Earth orbit versus creating a vital fuel depot at Mars.

The mega-rocket doesn’t have a name but for now is called BFR. The B is for big; the R for rocket. As for the F, well, you get the idea.