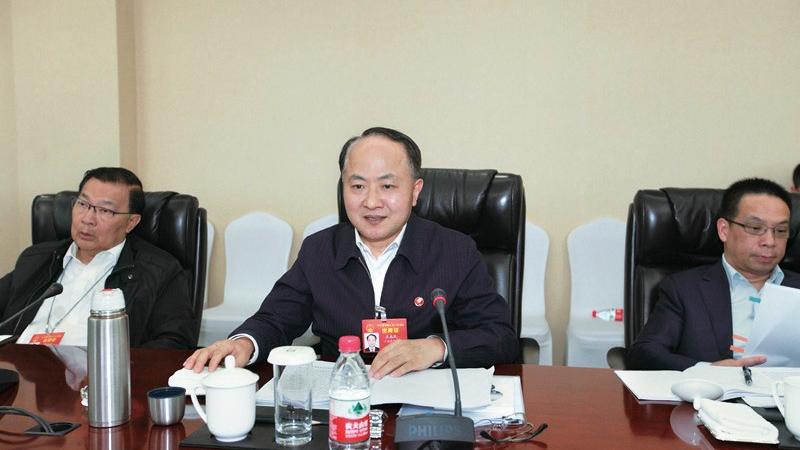 Wang Zhimin, director of the Liaison Office of the Central People's Government in the Hong Kong Special Administrative Region, speaks at a group meeting of Hong Kong deputies to the National People's Congress in Beijing last week. (PHOTO / PROVIDED TO CHINA DAILY)

To grasp the opportunities, Wang called for Hong Kong to continue to play a leading role in pushing the mainland’s market regulations to an international level

The liaison chief made the remarks at a group meeting with the Hong Kong delegation to the National People’s Congress in Beijing on Saturday. During the meeting, the deputies deliberated on the nation’s draft foreign investment law and reviewed the work report of the NPC Standing Committee.

Citing Zhang Yesui, spokesman for the second session of the 13th NPC, Wang said that with the new Foreign Investment Law in place, relevant arrangements for investment from Hong Kong, Macao and Taiwan “will not be changed”.

In future, as the country continues to upgrade its legal system, market regulations will be further enhanced and the business environment will become more open, Wang predicts. It will also offer new opportunities for Hong Kong to integrate into the nation’s overall development and share the benefits, he added.

The protection of private property and intellectual property rights will be enhanced and more Hong Kong industries will also be well connected to the mainland market, Wang said.

To grasp the opportunities, Wang called for Hong Kong to continue to play a leading role in pushing the mainland’s market regulations to an international level.

Enjoying the most favored policies in the mainland’s opening-up process, many regulations of the draft Foreign Investment Law, such as the “negative list” mechanism for access to foreign investment, were tried initially during the implementation of CEPA. Many open initiatives in the country’s financial sector were also tried first in Hong Kong and then adopted in other cities, Wang recalled.