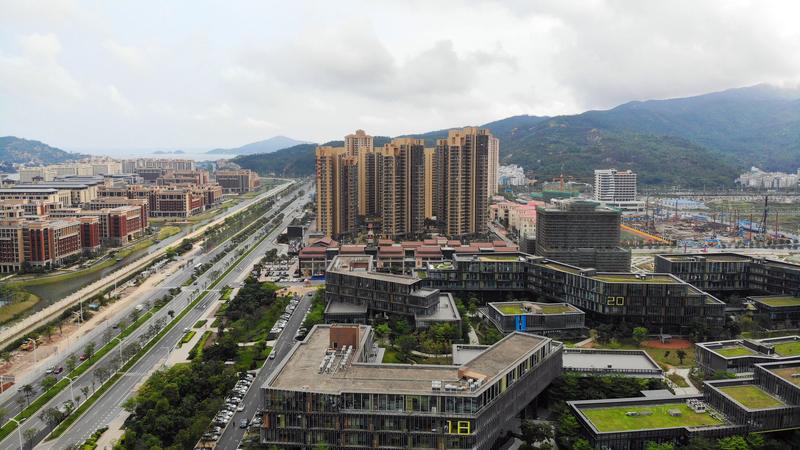 An aerial view of the Hengqin Creative Valley. (FANG XING / FOR CHINA DAILY)

Macao is building stronger ties with the neighboring city of Zhuhai, Guangdong province, through an innovative pilot zone to transform and diversify its economy, which was built upon the gaming industry.

The pilot zone, with innovative policies to facilitate work, life and education for Macao residents, is expected to further assist the integration of the special administrative region, 20 years after its return to the motherland.

Across shallow waters to the west of Macao, the once-barren island of Hengqin, facing Macao's Taipa island, has become the flagship zone for cooperation between the two cities. Banking on the development of the 11-city cluster of the Guangdong-Hong Kong-Macao Greater Bay Area, Macao enterprises have enjoyed support in Hengqin, including tax benefits, simpler administrative procedures and subsidies.

By the end of last month, 1,594 companies from Macao had registered in Hengqin, spanning commercial and financial services, leisure and tourism, healthcare, and cultural and creative industries, according to Xinhua News Agency.

Since the opening of the Hengqin Creative Valley in 2015, it has incubated 349 startups, including 186 young entrepreneurial teams from Macao, the report said.

Over 20 Macao enterprises have received more than 433 million yuan (US$60.7 million) in funding.

A 5-square-kilometer area of land has also been set aside in Hengqin for the Guangdong-Macao Cooperation Industrial Park.

The park will focus on the development of traditional Chinese medicine, cultural and creative, education and training industries. In a bold move, the Macao government will lead the assessment process of projects that will occupy half of the industrial park.

In March, the first cross-border office building went into operation in Hengqin, which 15 companies from Macao now base themselves in. A shuttle bus service is in place to help the growing cross-border labor force get to work.

Vehicles with Macao license plates have been allowed to enter Hengqin since December 2016. As of April, the total quota of Macao vehicles permitted to enter was 2,500.

Education development, which is restricted by Macao's limited 33 sq km of land, is another area that has benefitted from the industrial park.

The University of Macau opened its campus in Hengqin in November 2013. The 1.1-sq-km campus is under the jurisdiction of the Macao SAR, and all staff and students can access the campus via a tunnel from the Macao side without the need to clear immigration.

By the end of this year, a Macao checkpoint - Cotai Frontier Post - will move all its operations to the new Hengqin Port. Once completed, residents from both sides will enjoy a faster, one-off immigration clearance procedure.

Since July 1, Macao residents who live in Hengqin can access medical insurance enjoyed by their counterparts in the mainland.

According to the city government of Zhuhai, construction of the first pilot residential zone in the mainland for Macao residents will start before the end of the year. Once completed, it will adopt some of Macao's social system and policies.

Henqgin has designated 20 hectares for the residential complex, which will provide for elderly care and medical, residential and educational needs.