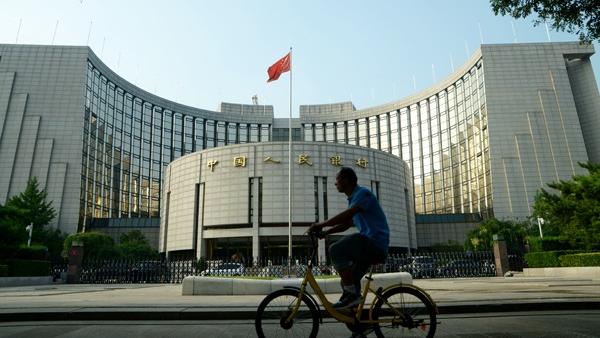 In this undated photo, a cyclist pedals past the headquarters of the People's Bank of China in Beijing. (FAN SHAOGUANG / CHINA DAILY)

The People's Bank of China, the central bank, will issue several policies to facilitate opening-up of the financial sector in Shanghai in line with the plans to transform the city into an international financial center, a top official said on Thursday.

Speaking at the 10th Lujiazui Forum in Shanghai, PBOC Governor Yi Gang said that the central bank will help Shanghai develop innovative and trial cross-border renminbi businesses and products to advance the internationalization of the Chinese currency. To that end, Shanghai should make full use of its renminbi pricing settlement function of large commodities so that it can give financing support to the Belt and Road Initiative, said Yi.

Besides, Shanghai will be given the priority to start reforms in foreign exchange management. The function of free trade accounts at the China (Shanghai) Pilot Free Trade Zone should be further explored to promote capital account convertibility, he said.

Yi also reiterated that Shanghai has a significant role to play in China's debt, currency and foreign exchange markets. Therefore, efforts should be made to enhance the convenience and efficiency of transactions, perfect the legal and market environment, and strengthen infrastructure such as transaction trusteeship and clearance in Shanghai.

"A large number of foreign banks, securities firms, insurance companies and investment banks consider Shanghai as a key destination in their global plans. In this sense, China's recently announced opening-up in the financial sector such as lifting the limits on foreign ownership in these institutions and on the restrictions on their business licenses will have a profound influence," he said.

Shanghai rolled out its financial opening-up policies in mid-May in fields including banking, securities, insurance, financial markets and free trade accounts. The opening-up has also touched upon policies for bank-card clearing institutions and nonbank payment institutions.

So far, the municipal government has received 23 application projects in banking, securities and insurance since the release of opening-up policies. Companies and institutions in developed markets such as the United Kingdom, Germany, France and Japan have shown their interest in the opening-up policies. Interest has also been received from emerging markets such as Jordan and Morocco.

Yi also applauded Shanghai for its leading position nationwide in terms of research and innovation in financial technologies, ably demonstrated by the companies and institutions. As the municipal government is attaching greater importance to this sector, the city is sure to see huge room for future development, he said.

ALSO READ: PBOC: China's financial sector has much room for opening up

So far, over 1,500 licensed financial institutions have registered in the city, among which 30 percent are foreign institutions. The city is home to 360,000 financial industry practitioners. The annual transaction volume in the financial market exceeded 1,400 trillion yuan (US$219 trillion) last year.