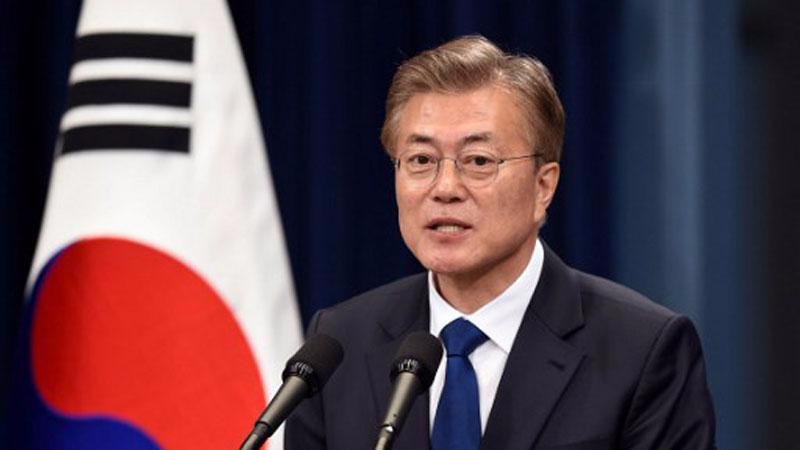 The Republic of Korea's President Moon Jae-In speaks during a press conference at the presidential Blue House in Seoul on May 10, 2017. (Jung Yeon-Je / Pool / AFP)

The 2019 budget proposal calls for a spending increase of about 9.7 percent from last year’s initial budget, the biggest jump since the aftermath of the global financial crisis in 2009, the finance ministry said in a statement. Spending to create jobs will rise a record amount, while infrastructure spending will fall, the ministry said.

The 2019 budget proposal calls for a spending increase of about 9.7 percent from last year’s initial budget

Moon’s approval ratings have dropped to the lowest level since his election in May 2017 as the economy has run into headwinds. He vowed to be a "jobs president" and to create a fairer society, but has faced a backlash over an aggressive increase in the minimum wage that some blame for a hiring slowdown.

Both the government and Bank of Korea have trimmed their forecasts for economic growth this year to 2.9 percent from 3 percent. Employment has been rising but at a slower pace. The jobless rate ticked up to 3.8 percent in July, according to Statistics Korea.

The BOK has held the benchmark interest rate at 1.5 percent since raising it from a record low in November.

The budget proposal calls for spending a record 24 trillion won to boost employment, including creating more jobs for the elderly, the disabled and women, Kim said. Some of that money will provide indirect support for job creation in the private sector, he said.

To nurture innovative growth, the government will expand investments in research and development by 3.7 percent to 20 trillion won.

The government’s spending plan may support private consumption and will likely help mitigate any downside risks to economic growth next year, said Park Seok-gil, an economist at JPMorgan Chase & Co. 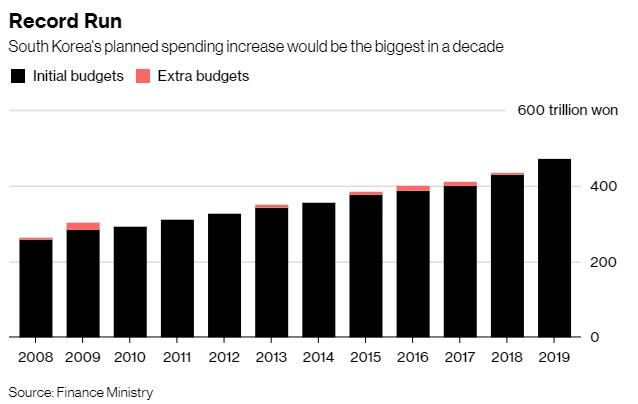 While his finance minister drew a somber picture of the economy, Moon on Saturday said the country is on the right economic path. “The quantity and quality of jobs has generally improved,” he said.

Government revenue will increase by 7.6 percent to 481 trillion won next year, thanks to higher corporate tax revenue, the finance ministry said. The government’s debt is expected to be 39 percent of gross domestic product, the ministry said.

The government plans to issue up to 97.8 trillion won of bonds in 2019. Of the total, 57.1 trillion won will be used for redemption payments. The remainder will be net issuance.

The government will submit the budget proposal to parliament in early September. Moon’s Democratic Party of Korea holds only 129 of the 299 seats. This year’s budget proposal is expected to face stronger opposition than last year’s, which was approved with only minor changes.