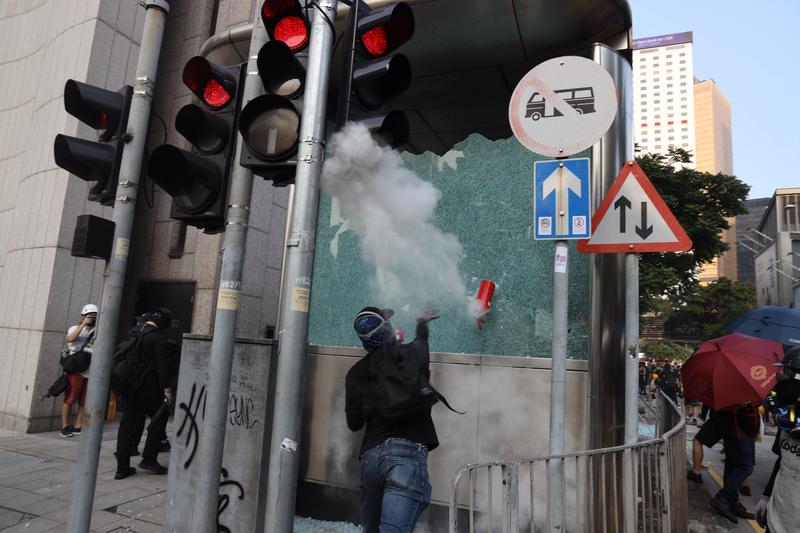 A rioter flings a fire extinguisher at the glass wall of an exit at Central MTR Station, while other radicals set fire to other entrances at the station. (PHOTO / CHINA DAILY)

Senior officials of the Hong Kong Special Administrative Region government on Sunday pleaded for the public to unite and make Hong Kong - the “Pearl of the Orient” - shine again after three months of violent citywide protests.

The call came after Chief Executive Carrie Lam Cheng Yuet-ngor announced on Wednesday a series of measures to start an open dialogue with the public to end the political impasse.

Hong Kong is in urgent need of strong and positive energy to ride out the storm at this critical junction and to safeguard ‘one country, two systems’ and the city’s stability and prosperity

Besides the formal withdrawal of the extradition bill that sparked the protests in early June, Lam said she and her team will reach out to different communities to talk directly to the people, irrespective of their political stance or social status.

Chief Secretary for Administration Matthew Cheung Kin-chung said in his blog the government is sincere in working with the public to seek solutions to the deep-seated issues through rational dialogues.

Lam’s four initiatives offer a new start for society to break the impasse, he said.

But he emphasized that such efforts do not represent a compromise to violence. The community’s top priority is to stop the violence and end the chaos, he said.

Hong Kong is in urgent need of strong and positive energy to ride out the storm at this critical junction and to safeguard “one country, two systems” and the city’s stability and prosperity, he added.

Financial Secretary Paul Chan Mo-po stressed that “one country, two systems” is essential to Hong Kong’s successful development, while the Basic Law safeguards the people’s rights and freedom, as well as the social order that guarantees public property and safety.

The ongoing violence has eroded the SAR’s core values and its institutional advantages, he said.

The violence and disruption to the city’s airport operations have seriously undermined Hong Kong’s reputation as a safe city for trade and commerce and its international image as an aviation and international financial center, Chan said.

This has also dealt a heavy blow to the local economy, with the tourism, retail and hotel industries bearing the brunt of the turmoil, he said, noting that many international conventions and exhibitions planned for the city have been relocated or postponed.

Writing in his blog, Secretary for Labour and Welfare Law Chi-kwong urged people holding different views to set aside their differences and bridge the rift that has widened as a result of the unrest.

READ MORE: Govt officials urge concerted efforts for a way out for HK

He noted the growing tensions among family members and friends holding different political views, and suggested that those in need should seek help and participate in activities that could help them build a positive attitude.

On Saturday, the SAR government refuted malicious rumors that a protester had been killed in a metro station, clarifying that there had been no deaths resulting from police enforcement action taken in the past three months.

The government was responding to rumors that a protester had been killed during police enforcement action in Prince Edward MTR Station on Aug 31.

The Hospital Authority has reconfirmed there were no cases involving deaths in the MTR incident.