Officers of the Explosive Ordnance Disposal search for hazardous items inside a messy room at the Hong Kong Polytechnic University, in the morning of Nov 28, 2019. (PHOTO / CHINA DAILY)

HONG KONG - Police safety teams Thursday began clearing the campus of the Hong Kong Polytechnic University (PolyU) that was a flashpoint for clashes with radicals, and an officer said any holdouts still hiding inside would not be immediately arrested.

Before 8 am, PolyU Vice-President Ben Yeung and more than 10 firefighters entered the campus to search for and remove hazardous items. Yeung told reporters that quite a lot of dangerous items had been spotted during the university's previous attempt to search for protesters who may be still hiding on the campus. He said Thursday's efforts by police and firefighters will help the university to reopen soon after being sealed for more than 11 days.

"Our major concern today is not about arrest, it’s about their well-being," said senior police officer Chow Yat-ming

The police move into PolyU came after its administration said they believed no one else remained inside after a two-day search ended Wednesday. Faculty teams found only a young woman in a weak condition and a stockpile of dangerous items including petrol bomb and corrosive liquid.

Hours before the police operation, a masked protester came out from his hiding and told reporters there are still fewer than 20 others holed up inside.

The university has been ringed by police for 11 days as protesters retreated into the campus after blocking a major tunnel and set toll booths on fire during clashes with police. Some 1,100 protesters have left or have been arrested. 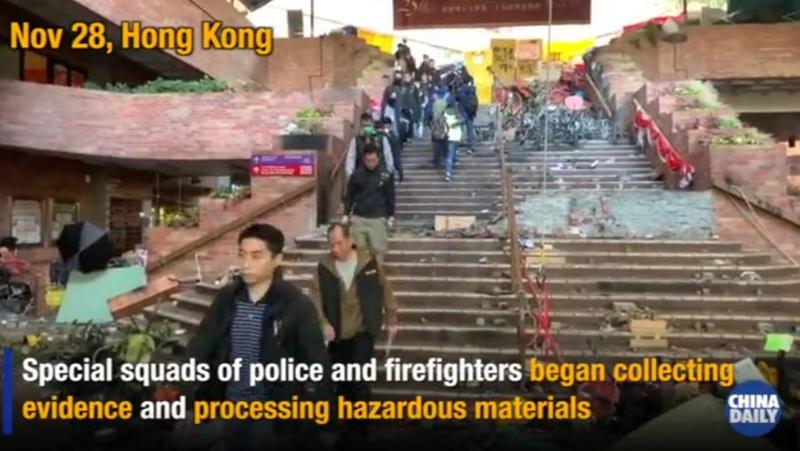 Senior police officer Chow Yat-ming said the focus of the operation is not to arrest any holdouts but on removing hazardous items that are a threat to public safety, and to gather evidence of “malicious” damage to campus facilities.

If they find any protesters, he said police mediators and counselors will coax them to seek medical treatment. He said they won’t be arrested but their details will be taken down for possible further action.

“Our major concern today is not about arrest, it’s about their well-being,” Chow said. He said it’s unclear how long the operation will take.

READ MORE: Police appeal to rioters holed up in campus to leave

Some 100 personnel, including hazmat teams and explosive disposal experts, fanned out across the vast campus. Television footage showed officers searching buildings and removing bottles and other items.