US base: Rallies held in Okinawa against central govt's landfill work 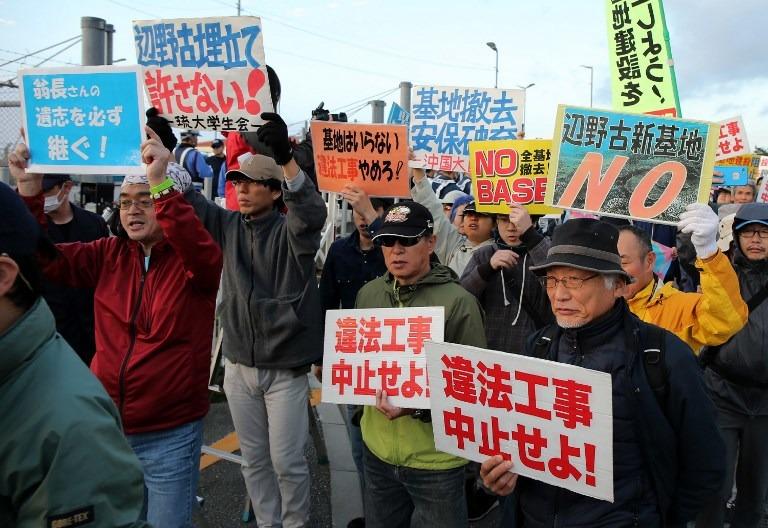 Protesters hold slogans during a demonstration near the gate of US Marine Corps' Camp Schwab in Nago, Okinawa prefecture, on Dec 14, 2018. On March 25, 2019, protesters again gathered in front of the gates of Camp Schwab, calling for the central government to scrap its plans to relocate a US airbase. (PHOTO / JIJI PRESS / AFP)

TOKYO — Rallies were held in Japan's southernmost prefecture of Okinawa on Monday, with protesters calling for the central government to scrap its plans to relocate a US airbase within the island as it runs contrary to the will of the majority of local citizens.

A prefectural referendum in Okinawa last month showed that more than 70 percent of eligible voters are opposed to the central government's plans to move the controversial US Marine Corps Air Station Futenma from Ginowan, to the coastal region of Henoko.

The central government, however, started landfill work for the replacement base on Monday.

The project hasn't won the people's understanding, which is why 72 percent of them opposed it in the referendum. We have to stop the work and hold dialogue.

Offshore landfill work entered a new phase in a 33-hectare section in the Henoko region in Nago, Okinawa, with the new project site adjacent to a smaller location, where land reclamation work in the pristine coastal region began last December.

READ MORE: Japan begins reclamation at disputed US base despite protest

Local demonstrators voiced their growing opposition to the construction work for the new base, with protesters gathering in front of the gates of the US Marines' Camp Schwab, located close to the landfill site, to hold a sit-down protest.

Demonstrators also took to small boats in waters close to the site with banners denouncing the relocation of the base.

"It's quite unreasonable for the central government to blame the people of Okinawa for the delay in the closure of the Futenma base after slow progress in the construction at Henoko. We have called for scaling down of US military bases in Okinawa, but instead they are being reinforced," one protester in her sixties was quoted by local media as saying.

Prefectural officials also slammed the central government for forging ahead with the contentious base move, despite the results of the referendum, with Okinawa Vice-Governor Kiichiro Jahana stating Monday that the ongoing landfill work should be scrapped as it undermines and disregards the will of the local people.

"The project hasn't won the people's understanding, which is why 72 percent of them opposed it in the referendum. We have to stop the work and hold dialogue," said Jahana.

The central government's stance remains, however, that relocating the base to Henoko is "the only solution."

Under a 1996 pact made between Japan and the United States to relocate the base, the central government later and unilaterally decided it should be moved from the crowded residential district of Ginowan to the less populated coastal area of Henoko.

But calls are becoming more vociferous from Okinawans for its postwar occupation by US forces to be completely ended, as, legally, Okinawa's control under the US ended in 1972. But to many on the subtropical island it feels as though its occupation is continuing with no end in sight.

ALSO READ: Tens of thousands rally for removal of US base off Okinawa

Okinawa hosts the vast majority of Japan's US bases, yet the island accounts for just a fraction of Japan's total land mass.

For decades, the local people have suffered from US-linked military accidents and mishaps, particularly involving aircraft, as well as general environmental and noise pollution.

Cases of heinous crimes committed by US-base linked workers spanning brutal rape and murder cases, instances of military personnel driving under the influence of alcohol, as well as cases of assault and disorderly behavior, have seen anti-US sentiment steadily rise in Okinawa.

The majority of local citizens want the Futenma base moved off the island and out of Japan altogether and their base-hosting burdens not merely "eased" but fundamentally lifted.