By Jing Shuiyu, Zhang Yunbi in Beijing and Hong Xiao in New York 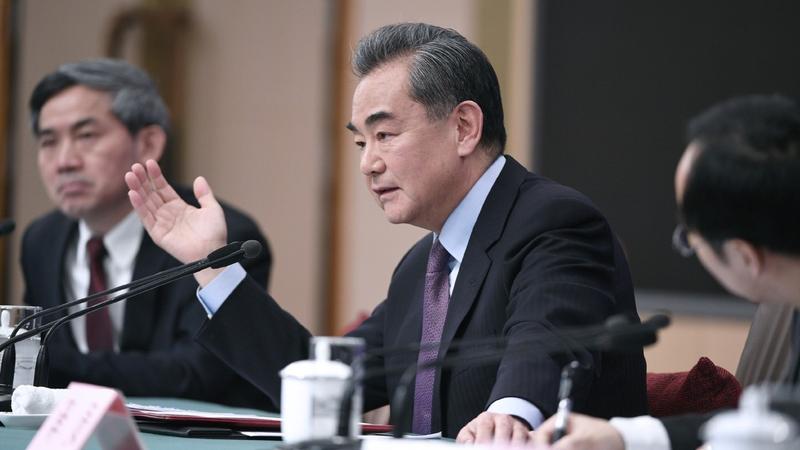 China's recent moves against US pressure regarding bilateral trade friction are aimed at safeguarding its justified legal rights and interests, the norms of international relations and the free trade system, State Councilor and Foreign Minister Wang Yi said on Wednesday.

China's door is open if the United States is ready for consultations on an equal footing, otherwise China will resolutely react, Wang said

Speaking to reporters on the sidelines of the Shanghai Cooperation Organization Foreign Ministers' Meeting in Bishkek, Kyrgyzstan, Wang said the Chinese side stated the facts and reality of the matter and won widespread understanding and support from the other ministers taking part in the meeting.

The joint communique of the meeting stated that SCO member states should jointly oppose unilateralism and protectionism in any form, Wang noted.

China's door is open if the United States is ready for consultations on an equal footing, otherwise China will resolutely react, Wang added.

Justin Yifu Lin, honorary dean of the National School of Development at Peking University and former chief economist at the World Bank, said the US runs a trade deficit with China as it purchases more goods from the latter for lower costs and with higher quality.

"Trade occurs on a voluntary basis," Lin said. The US has the ability to make the products domestically, but the costs can be very high, he said.

A trade imbalance has been at the center of China-US trade disputes over the past few months. The tensions have been extended beyond trade, which was manifested by Washington's tightening of restrictions on Chinese companies.

The real intention of the US government's recent moves is to contain the development of China and maintain its position as the world's leading economy, Lin said.

Zhou Shijian, senior fellow with the Tsinghua Center for US-China Relations, warned that Washington's protectionist measures would backfire, and he urged the US government to alter its stance as soon as possible.

"The US measures turned out to be unhelpful," Zhou said, citing data from the US Census Bureau that showed the US goods trade deficit reached a record of US$891.3 billion last year. US consumers and companies are bearing the costs brought by US tariffs imposed on other countries, and this will remain the case for the foreseeable future, Zhou said.

Chen Wenling, chief economist of the China Center for International Economic Exchanges, said the US government will "pay the price" for its protectionist behavior. "It (the US) is disrupting the world order, causing the global economy to weaken, and destroying the trade rules," Chen said.

A further escalation of the trade dispute between the US and China threatens both short and medium-term global growth prospects, according to the United Nations World Economic Situation and Prospects mid-2019 report released on Tuesday at the UN headquarters in New York. It said that global merchandise trade volume growth has slowed more sharply than expected, particularly in late 2018 and early 2019.