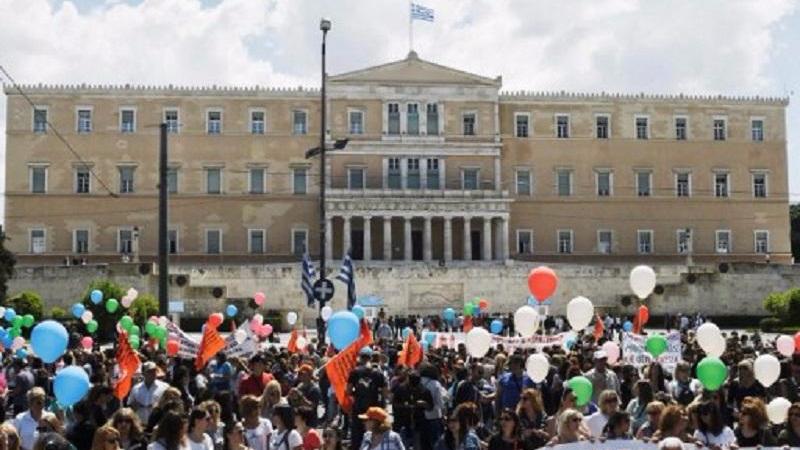 Employees from the municipal kindergardens protest outside the Greek parliament in Athens on May 22, 2017 during their 48-hour strike. (Louisa Gouliamaki / AFP)

Euro zone finance ministers and the International Monetary Fund (IMF) are expected to strike a compromise deal on Greece on Thursday, paving the way for new loans for Athens while leaving the contentious debt relief issue for later.

Papadimitriou told German newspaper Die Welt in an interview published on Thursday that Schaeuble first had acknowledged that Greece had met the requirements, but then changed his mind.

"I haven't met Schaeuble yet and I don't want to be impolite, but his behaviour seems dishonest to me," he added.

Papadimitriou said German resistance to debt relief for Greece raised questions about the very idea and structure of the euro zone. The success of right-wing populists in Europe also showed dissatisfaction with such European structures, he said.

"Greece is being made a sacrificial lamb," he said.

Papadimitriou also warned Schaeuble against making decisions based purely on domestic politics, noting that Germany had also received debt relief when it was rebuilding after World War Two.

Debt relief is needed to help Greece expand its economy, he said, noting that Athens was not asking for a debt cut, but rather lower interest rates or longer repayment schedules.

"Greece has fulfilled its commitments and adopted the required reforms. Now it is time for the Europeans to comply with their commitments on debt relief," Pavlopoulos said in an interview with German business daily Handelsblatt.

German opposition politicians also criticized Schaeuble by honing in on the fact that the IMF is likely to participate in the third bailout, but will only disburse any loans when debt measures have been clearly outlined.

Gerhard Schick from the Greens party accused Schaeuble of a "lousy trick" with the IMF participation.

Thomas Oppermann, senior member of the co-governing Social Democrats (SPD), told Bild newspaper: "Schaeuble must put his cards on the table ahead of the election and say what German taxpayers will have to expect."

The IMF believes Greece needs a debt haircut, which Germany rejects. IMF chief Lagarde has suggested a deal whereby the IMF would stay on board in the bailout, as Berlin wants, but not pay out further aid until debt relief measures are clarified.

A spokesman for Schaeuble told a government news conference on Wednesday he expected agreement on a sustainable overall package at Thursday's meeting, but said there was no guarantee that Athens would get debt relief.

It remains Germany's view that debt relief measures for Greece could only be decided after the existing third bailout ends in 2018, the spokesman added.

Schaeuble said on Tuesday he was confident that Greece would reach a deal with lenders this week. Last month he said everything pointed to stronger growth in Greece.