A tense night of chasing mob protesters in HK 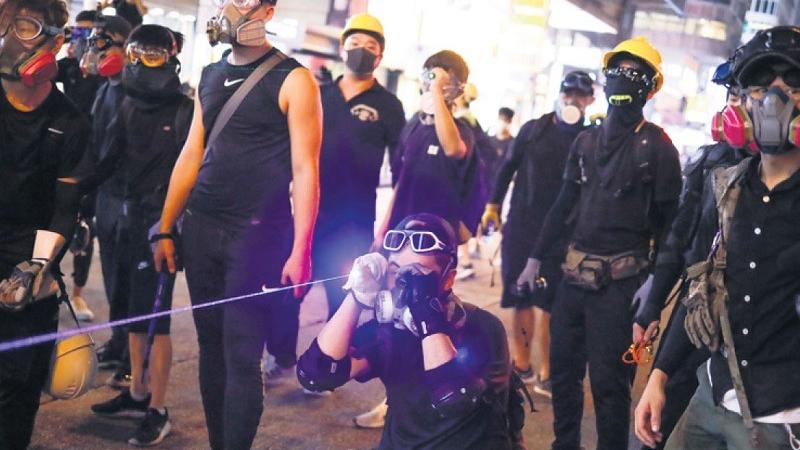 A protester points a highpower laser at police officers during an illegal rally in Tsim Sha Tsui, Hong Kong on Aug 10, 2019, while some protesters wearing black protective glasses stand beside him. (PHOTO / CHINA DAILY)

A reporter craving for front line experience, I never expected that my first time covering the protests was almost like playing a war game, except that it’s real enough.

As the unlawful rally in Tai Po in the north of Hong Kong morphed into guerrilla-style protests across the city at around 6 pm on Saturday, all journalists covering the incident had to run around with the rioters to chase the story.

ALSO READ: Govt outraged by violence over the weekend

Following two senior photographers, I have kept hearing their cell phones ringing. “They (the protesters) are going to Sha Tin and Tai Wai,” one caller reported. Another call said that now they were at the Cross Harbour Tunnel. Then it was Tsim Sha Tsui and Wong Tai Sin.

In Hung Hom and Tsim Sha Tsui, I saw protesters dismantling roadside metal fences and digging up drain covers on the streets

Throughout the night, we have been highly focused, trying our best to catch up with the protesters. They moved from one flashpoint to another so swiftly that we had to make quick decisions and frequently adjust our reporting plans.

As we drove away from Tai Po, where we saw the standoff between protesters and the police for hours without clashes, we heard from other journalists that a fresh skirmish had just broken out there. Yet after we turned back, they had already moved to a different location. At that moment, I felt like we were being led on a wild goose chase. It was really frustrating.

Compared with previous incidents, it appeared to me that Saturday’s protests were more unscripted, or even aimless. I’m not sure whether the protesters have changed their tactics, but I really can’t figure out what they were trying to do.

At Tai Po, a group of radicals obviously attempted to charge the police cordon, as they kept hurling nonstop insults at police officers and continuously inciting other protesters to act. But they abandoned the attempt in the end due to a lack of support.

In Hung Hom and Tsim Sha Tsui, I saw protesters dismantling roadside metal fences and digging up drain covers on the streets. Yet the efforts seem to be in vain as they quickly left the scene. It appeared to me that they just wanted to destroy public property. They did it in an unbridled way even there were no specific aims.

From what I saw, most of the protesters had no idea at all of what they were doing and what they were going to do. Without independent thinking and their own judgment, they just blindly followed.

When I asked about their next step, many said that even they themselves were not sure as the plans were always changing. Amid the standoff in Tai Po, a demonstrator told me if there was somebody who could bravely stand out to confront the police, he would definitely follow. But no one did.

At that night, a tense and scary atmosphere enveloped the city. As protesters swarmed out of MTR stations, crowds of frightened passersby scattered quickly, some shouting: “Here they come again! The horrible demonstrators,” or “Dad, I’m so scared” Many others were questioning aloud: “What on earth do those troublemakers want?”

For me, I really hope the protesters could hear these people’s voices. It’s time to stop playing this ridiculous game.