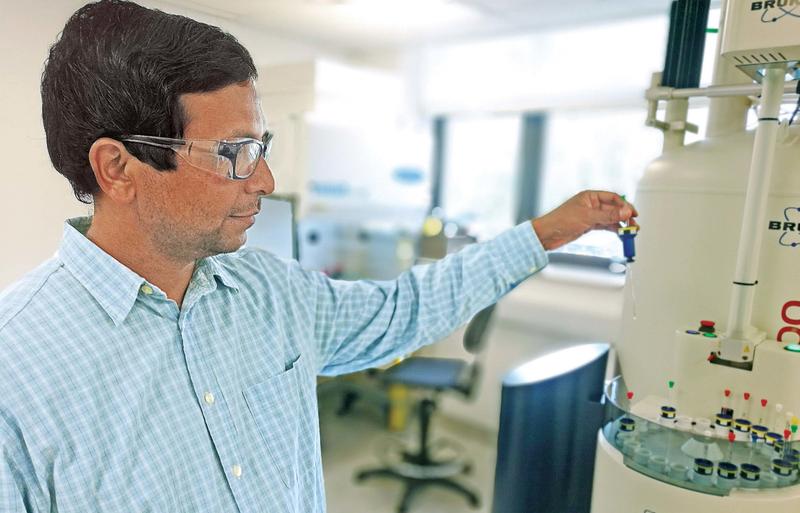 In a laboratory at the University of Lincoln's School of Pharmacy in the United Kingdom, drug designer Ishwar Singh holds a thin vial of clear liquid up to the light.

"It's not like any other antibiotic," Singh said. "That is why it's so interesting."

Inside the vial is a molecule that has the potential to save millions of lives.

After years of false starts－and a vital brainstorm that challenged opinion in the field－Singh and his students have successfully synthesized teixobactin, a new class of antibiotic that kills bacteria resistant to conventional antibiotics, known as "superbugs".

Singh describes the moment he and his team synthesized the molecule as "quite satisfying", which is about as self-congratulatory as the modest chemist gets.

A future where antibiotics are ineffective is a scary one. Even simple infections could be fatal, and antibiotics are essential to surgeries and courses of chemotherapy. The impact would be massive

When pushed, he said that if the drug ever becomes available commercially, it could have major implications for humanity.

"A future where antibiotics are ineffective is a scary one," Singh said. "Even simple infections could be fatal, and antibiotics are essential to surgeries and courses of chemotherapy. The impact would be massive."

ALSO READ: WHO warns of running out of antibiotics globally

That worrying vision of the future is not a distant one. At least 700,000 people worldwide die each year due to drug resistance, according to a review on antimicrobial resistance, or AMR, commissioned by the UK government.

If left unchecked, AMR could lead to 10 million deaths a year by 2050. That is more than the number of people who die from cancer annually and on a par with the number of deaths each year during the worst outbreaks of the Black Death, the devastating epidemic of bubonic plague that reached Europe and Asia in the mid-1300s.

It is a scenario that UK Chief Medical Officer Sally Davies describes as the "post-antibiotic apocalypse". And this year, through a joint initiative, the UK and Chinese governments have significantly stepped up joint efforts to ensure that day does not arrive.

The review outlined the devastating impact that AMR may soon have on both world health and the global economy. O'Neill forecast that the cost in terms of lost production between now and 2050 could reach US$100 trillion if no action is taken.

Agreeing the problem was too large for one government to solve, Cameron and President Xi Jinping established the US$72 million Global AMR Innovation Fund, also called GAMRIF.

"If we fail to act, we are looking at an almost unthinkable scenario where antibiotics no longer work and we are cast back into the dark ages of medicine," Cameron said.

This year, the UK and China injected a further 47 million pounds (US$62 million) into the fund and the fight against superbugs.

Through the fund, both nations hope to raise US$1 billion from public and private sources, which will be allocated to tackle a broad range of issues.

Reducing the inappropriate use of antibiotics in humans and animals has been described as the "tip of the spear" in the battle against superbugs, as this compounds the resistance problem. Studies have found that one in five antibiotics is prescribed inappropriately in the UK, and in the United States this is one in three.

The UK's Parliamentary Under Secretary of State for Public Health and Primary Care, Steve Brin, said, "By operating together, the UK and China will represent a formidable force against one of the most dangerous global crises facing the modern world."

In June, GAMRIF and the Canada-headquartered International Development Research Center announced a global call for research proposals to reduce AMR in poultry, swine and aquaculture. Overuse of antibiotics in livestock has led to several strains of drug-resistant bacteria that also infect humans.

In May, GAMRIF and the Foundation for Innovative New Diagnostics, headquartered in Switzerland, committed 5 million pounds to a three-year project focused on developing AMR surveillance programs in low- and middle-income countries.

In March, the UK Health Department committed 10 million pounds and the Chinese Ministry of Science and Technology put forward 60 million yuan (US$8.8 million) to fund a joint competition to encourage researchers in the UK and China to develop solutions addressing the threat posed by AMR.

This year, funds have also been committed to a project in Argentina focusing on AMR in agriculture, the development of a new antibiotic for drug-resistant gonorrhea, and 20 million pounds went to the Combating Antibiotic Resistant Bacteria Biopharmaceutical Accelerator, a project in the US that supports research on the most dangerous drug-resistant bacteria.

Antibiotics revolutionized medicine in the 20th century. Penicillin alone is thought to have saved more than 200 million lives since it was first used to treat infection in 1942.

Most conventional forms of antibiotics, including penicillin and methicillin, attack bacteria by inhibiting the formation of cell walls, or by interrupting vital processes such as protein synthesis.

Some bacteria develop resistance to antibiotics through genetic mutations that alter areas or processes targeted by medication.

Over time, these genes proliferate, creating entire strains of anti-bioticresistant bacteria such as methicillin-resistant Staphylococcus aureus, or MRSA. 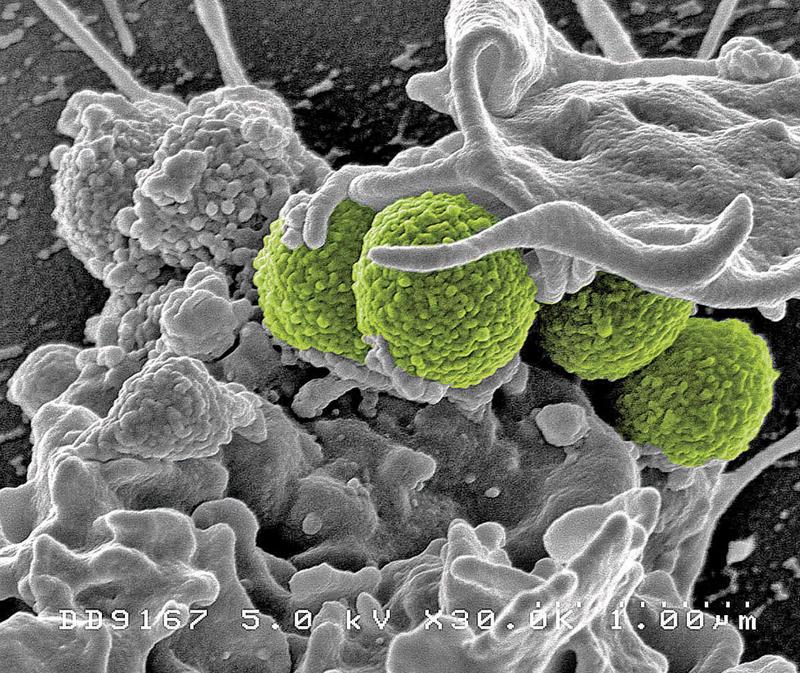 A study conducted last year by the London School of Hygiene and Tropical Medicine suggests MRSA is widespread in the UK. Over a 12-month period, 173 separate infection clusters were identified in the east of England alone.

Earlier this year, an outbreak of MRSA at a hospital in the Irish capital Dublin led to the infection of six infants and the deaths of two babies born prematurely.

Victoria Wareham, a senior staff nurse at St Thomas' Hospital in London, said that a few years ago she would treat a child for a drug-resistant infection on average once a week. Today, she said it is not uncommon for three or four children to be admitted in a week.

"For some cases, like MRSA, the course of treatment can take weeks," Wareham said. "We try to make the bed space as homely as possible, but with these kids, the toys they can play with and the linen we use is really restricted."

The AMR problem is compounded by the fact that new strains keep emerging. Last year in China, a previously unknown drug-resistant strain of pneumonia killed five people at a hospital in Zhejiang province.

Search for a cure

There are 48 registered new antibiotics that have the potential to combat drug resistance, according to a database compiled by the Pew Charitable Trust, a public policy body in the US.

"Only one out of every five is likely to make it all the way through to human testing," said Kathy Talkington, who heads the AMR project at the trust. "And only 12 of those in development will treat those pathogens listed by the World Health Organization as critical threats." 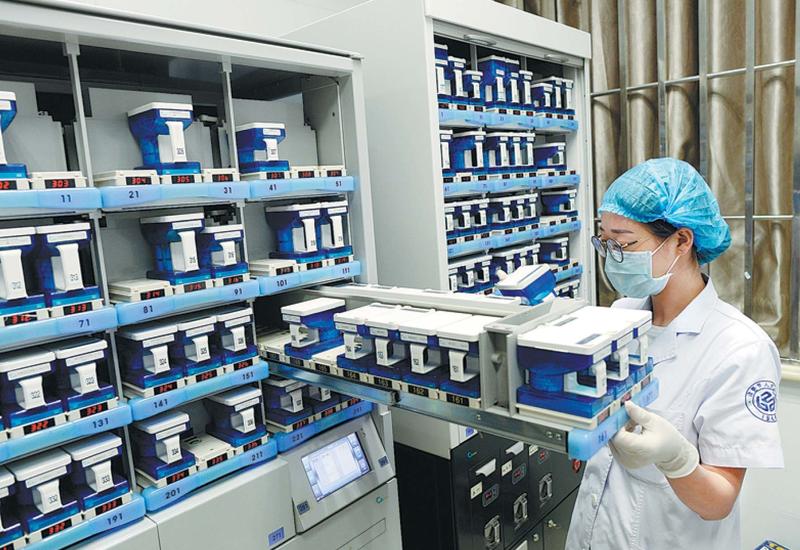 Promising work in the fight against superbugs is underway in the United Kingdom and China. (PHOTO / XINHUA)

Later this year, Talkington will launch a virtual laboratory of drug development data to enable scientists to discover patterns in terms of the most effective drugs against superbugs.

"Our hope is that it makes everything readily available so that people don't repeat the same research," Talkington said. "We simply don't have time for those repetitions."

Some of the most promising recent work in the development of the next generation of treatments is underway in the UK and China.

In September, Richard Kao Yi-tsun, a microbiologist at the University of Hong Kong, said he had successfully used a compound called NP16 to inhibit the production of a pigment in MRSA. The pigment, called staphyloxanthin, helps MRSA to deal with attacks from the immune system, and the body can naturally clear infection more easily in its absence.

Many antibiotics are becoming useless, causing hundreds of thousands of deaths each year. Superbug numbers are increasing at an unexpected rate. We want to change that"

Martha Clokie, a professor of microbiology at the University of Leicester, has had some success in using viruses called phages to kill E. Coli bacteria, suggesting that viral therapy could be used as an alternative to antibiotics to treat infection.

Dong used intense X-rays to map the structure of the outer membrane and identified pathways through which the cell sends "building block" proteins to construct the membrane. He discovered that molecules can be used to block these pathways, rendering the bacteria defenseless.

Dong said he is collaborating with drug designers who might be able to develop medications that exploit what he describes as bacteria's "Achilles' heel".

"Many antibiotics are becoming useless, causing hundreds of thousands of deaths each year," Dong said. "Superbug numbers are increasing at an unexpected rate. We want to change that."

One of the most encouraging AMR projects underway in Britain is the one at the University of Lincoln, where Ishwar Singh and his team have developed synthetic teixobactin.

In 2015, scientists in the US discovered teixobactin in soil-dwelling bacteria. These bacteria use the molecule－comprising 11 amino acids－as a kind of chemical weapon to kill other bacteria. Unlike other naturally occurring antibiotic substances such as penicillin, teixobactin targets lipids in a bacteria's cell walls instead of proteins.

Immediately after its discovery, teixobactin was found to be effective against several drug-resistant strains of bacteria, including MRSA. However, it proved challenging to synthesize in the laboratory.

To get a drug to market, it has to be simple and cost effective to manufacture, and teixobactin is a complex molecule. One of its amino acids－the 11 building blocks that make up the molecule－is rare and not commercially available. It is positively charged and takes 30 hours and multiple steps to introduce during the synthetization process.

After years of experiments, Singh and his team made a breakthrough after "trying something that shouldn't have worked".

They replaced the problem amino acid with a different, commercially available one that had no charge.

Conventional wisdom held that the revised teixobactin analogue should have fallen apart, but incredibly it held together. And it was also more potent, killing off superbugs in test tubes more efficiently than its naturally occurring cousin.

In March, Singh achieved another "quantum leap" in the drug's development. He sent the manmade teixobactin to the Singapore Eye Research Institute, where researchers successfully used it to treat bacterial infection in mice.

Singh and his team are now working to further simplify the process of making the molecule. He hopes the new antibiotic will go for human testing in the next six to 10 years.

"I think it will be used as a last line of defense when conventional antibiotics fail to address issues," Singh said. "We are not finished yet, but we are excited."