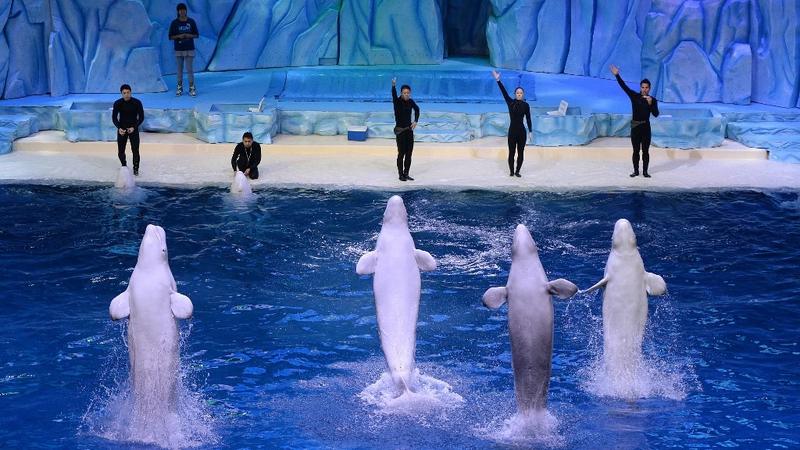 In this file photograph dated April 29, 2014, Beluga whales are shown leaping from the water during a performance at the Chimelong Ocean Kingdom in Hengqin Island in the city of Zhuhai, Guangdong province. A pair of seasoned performers received a warm welcome on June 19, 2019 in Iceland, where the two beluga whales that previously lived at an aquarium in China will help populate a sanctuary for formerly captive marine mammals.  (MARK RALSTON / AFP)

REYKJAVIK, Iceland — A pair of seasoned performers received a warm welcome Wednesday in Iceland, where the two beluga whales that previously lived at an aquarium in China will help populate a sanctuary for formerly captive marine mammals.

The whales, expected to reach 35 to 50 years of age, will be the first aquatic animals to inhabit the sanctuary for cetaceans off Iceland's southern coast

Conservationists celebrated when a plane from Shanghai carrying the whales, named Little Gray and Little White after the colors of their skin, touched down at Iceland's Keflavik International Airport.

"The whales did well on the flight and are in good shape," logistic expert Sigurjon Sigurdsson said after the 12-year-old females were on the ground.

The whales, expected to reach 35 to 50 years of age, will be the first aquatic animals to inhabit the sanctuary for cetaceans off Iceland's southern coast. Their home will be a 32,000-square-meter sea pen at a pristine creek called Klettsvik, accessible by whale-watching boats.

After an 11-hour flight, the pair's tank was loaded onto a truck for a drive to a harbor and the last leg of their journey, a 30-minute boat ride to the Westman Islands archipelago. There, they are set to stay in a specially designed indoor pool for 40 days while caretakers increase their food intake to build up extra blubber for heat insulation.

The whales currently weigh about 900 kilos and have strong appetites for herring - which was an essential airplane snack for the not-so-frequent flyers.

Little White and Little Gray were captured in Russian waters and sold to Changfeng Ocean World aquarium in Shanghai some 10 years ago. Beluga whales are native to the Arctic Ocean, not the North Atlantic surrounding Iceland. The International Union for Conservation of Nature estimates that 135,000 mature Beluga whales live in Arctic waters.

The Russian region is known for "whale jails" where orcas and beluga whales are available for purchase. Beluga whales carry a price tag of about US$150,000, and many are reportedly sold to sea-parks in China, according to Russian news agency RIA Novosti.

The release of Little Gray and Little White reflects a worldwide movement against keeping whales and dolphins in captivity. The mission to relocate them began when Changfeng Ocean World was acquired by Merlin Entertainment, a British corporation that owns Legoland and other theme parks.

The company, which has a policy against captive whales and dolphins, teamed up with the wildlife fund Sea Life Trust to spearhead the effort.

ALSO READ: Seeing the light in a land of darkness

"We are sad to see them leave but we understand that they come from nature," Iker Wang, head trainer at Chengfeng aquarium, said in a press statement.

Marianne Helene Rasmussen, a research professor at the University of Iceland, questioned what the massive operation accomplished. Whale-watching, to her, is about seeing the mammals in their natural surroundings.

"Why bring two whales, whose species is not naturally in Icelandic water, and keep them in captivity here?" Rasmussen said.

Despite the dramatic life change, Little White and Little Gray have not withdrawn from the public eye. Their presence on the Westman Islands is expected to be a drawcard for a town with 4,000 residents. One local tour operator is already taking bookings.

Westman Islands Mayor Iris Robertsdottir anticipates a massive celebration once the whales are released into the ocean later this summer. It won't be the first time the town gathers at the harbor to welcome a whale.

In 1998, the male orca from the Hollywood film Free Willy was released into the same Klettsvik creek and prepared for freedom with "ocean walks."

"That was a very different project," Robertsdottir told The Associated Press. "These belugas are not being trained to eventually live in the wild. They will be fed and live only at Klettsvik."

The whale, nick-named Keiko, died of pneumonia after a year in the wild. He kept being drawn to boats and other human activity, and never joined a wild orca pod.

Around 3,000 whales, dolphins and porpoises are held in tanks globally, according to wildlife charity Whale and Dolphin Conservation.

The Westman Islands project is privately funded. The cost has not been disclosed. Iceland media estimated the infrastructure alone cost around US$15 million.