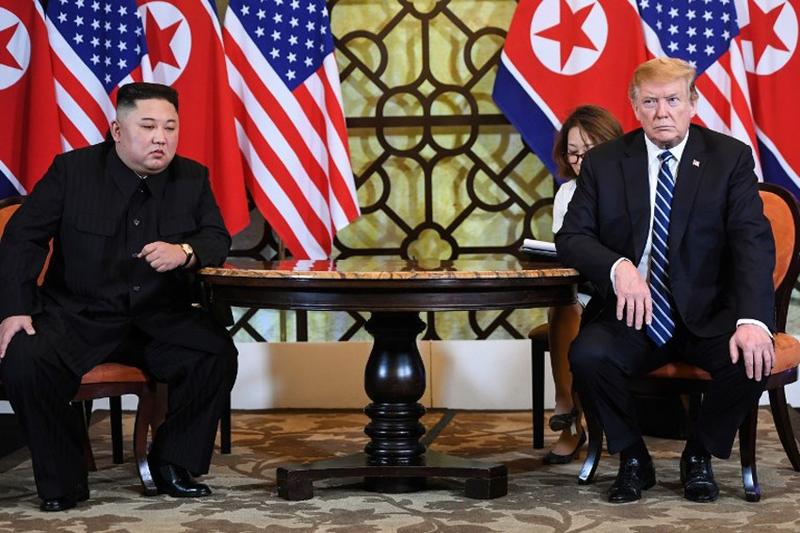 US President Donald Trump, right, and leader of the Democratic People’s Republic of Korea (DPRK) Kim Jong-un hold a meeting during their second summit at the Sofitel Legend Metropole hotel in Hanoi, Feb 28, 2019. (SAUL LOEB / AFP)

HANOI – US President Donald Trump said on Thursday his summit with leader of the Democratic People’s Republic of Korea (DPRK) Kim Jong-un had failed to reach agreement due to DPRK demands to lift punishing US-led sanctions.

Earlier, both Trump and Kim had expressed hope for progress on improving relations and on the key issue of denuclearization, in their talks in the Vietnamese capital, Hanoi, their second summit in eight months after their Singapore meeting.

Basically, they (DPRK side) wanted the sanctions lifted in their entirety, but we couldn't do that ... we had to walk away from it.

"Basically, they wanted the sanctions lifted in their entirety, but we couldn't do that ... we had to walk away from it," Trump told reporters after summit talks were cut short.

The United Nations and the United States ratcheted up sanctions on the DPRK when the country undertook a series of nuclear and missile tests in 2017, cutting off its main sources hard cash.

Both leaders left the venue of their talks, the French-colonial-era Metropole hotel, without attending a planned lunch together, and returned to their hotels.

Failure to reach an agreement marks a setback for Trump, a self-styled dealmaker under pressure at home over his ties to Russia and testimony from Michael Cohen, his former personal lawyer, accusing him of breaking the law while in office.

Trump said Cohen "lied a lot" during Congressional testimony in Washington on Wednesday. 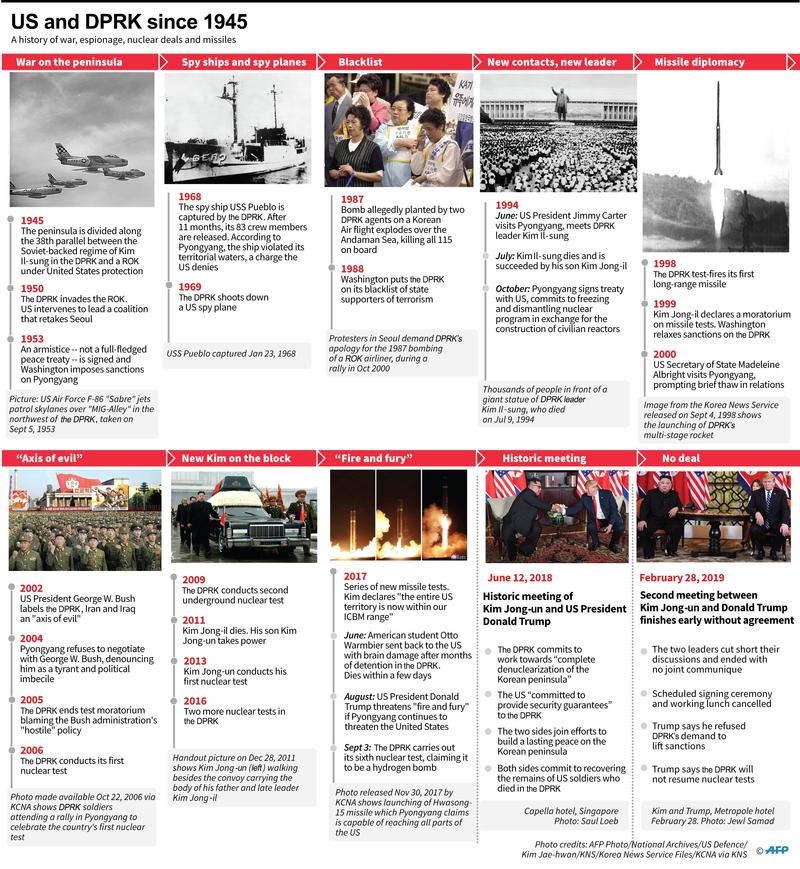 While Trump had said he was in "no rush" to strike a deal with the DPRK, and wanted to do the right deal with Kim, the White House had been confident enough to schedule a now cancelled "joint agreement signing ceremony" at the conclusion of talks.

"You always have to be prepared to walk," Trump said, describing the two days of talks as very productive. "We had papers ready to be signed, it just wasn't appropriate."

Kicking off their second day in Hanoi earlier on Thursday, Trump again stressed the talks aimed at tackling Pyongyang’s nuclear threat should not be rushed. He said he would be happy as long as the DPRK conducted no more nuclear or intercontinental ballistic missile tests.

The DPRK has conducted no nuclear or intercontinental ballistic missile tests since late 2017.

Trump said Kim had promised him there would be no more nuclear or rocket tests.

Trump said he and Kim had discussed dismantling the DPRK’s main nuclear facility at Yongbyon, which Kim was willing to do, but he had wanted sanctions relief. 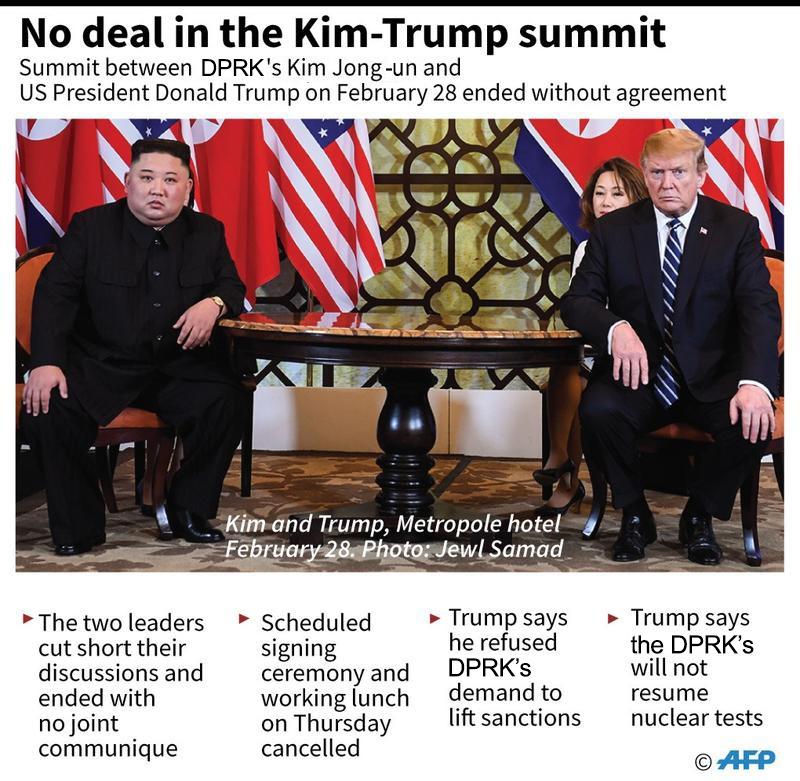 Earlier Kim and Trump, seated across from each other at a conference table, appeared confident of progress.

If I'm not willing to do that (denuclearization), I won't be here right now

“If I’m not willing to do that, I won’t be here right now,” Kim told reporters through an interpreter, when asked if he was ready to give up his nuclear weapons.

Trump, responding to that, said: "That might be the best answer you’ve ever heard.”

Kim did not elaborate on what "denuclearization" would entail, but asked if he was ready to take concrete steps, Kim said they had just been talking about that.

While the US is demanding the DPRK give up all of its nuclear and missile programs, the DPRK wants to see the removal of a US nuclear umbrella for its Asian allies such as the ROK and Japan.

The two leaders' first summit, in Singapore in June, the first between a sitting US president and a DPRK leader, produced a vague statement in which Kim pledged to work toward denuclearization of the Korean Peninsula. 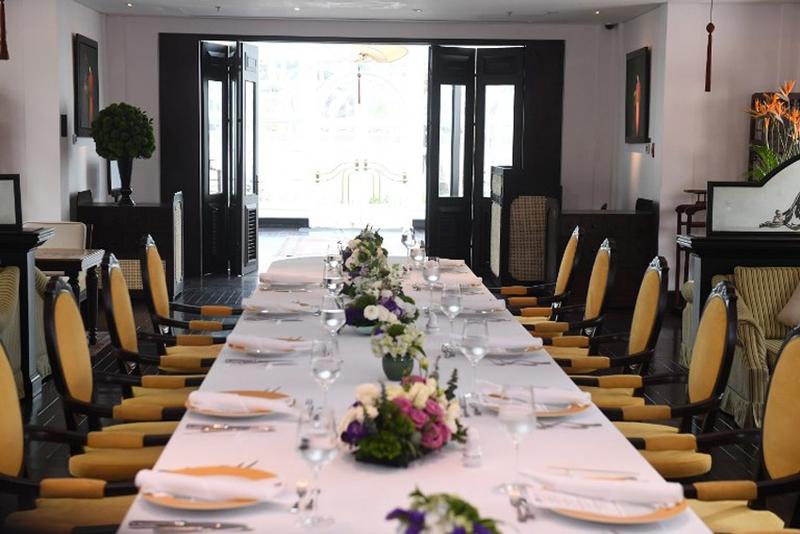 A table set up for a working lunch between US President Donald Trump and DPRK leader Kim Jong-un is pictured during their second summit in Hanoi, Feb 28, 2019. The two leaders scuttled the lunch and a joint agreement signing ceremony as they ended their meeting abruptly. (SAUL LOEB / AFP)

But there has been little progress since.

Earlier Kim, asked by a reporter if he was confident about a deal, said, through an interpreter:

"It's too early to tell, but I wouldn't say I'm pessimistic.

For what I feel right now, I do have a feeling that good results will come out," he said, in what was believed to be his first ever response to a foreign journalist. 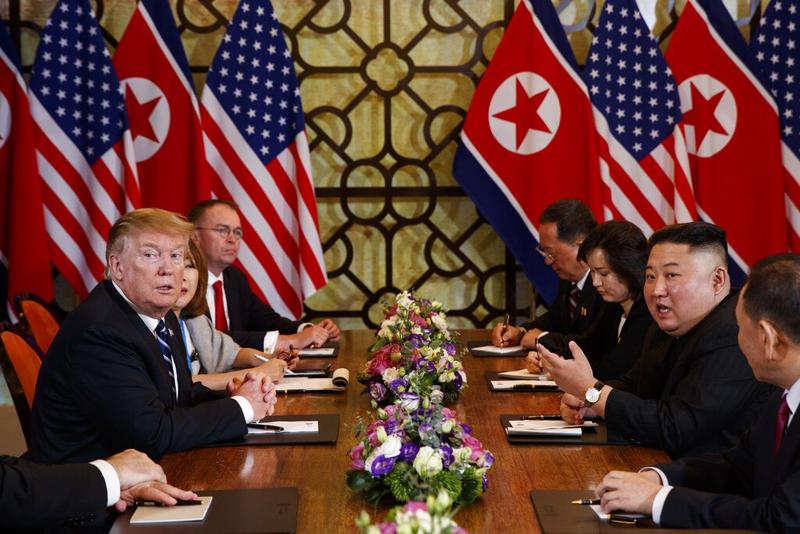 "There must be people who watch us having a wonderful time, like a scene from a fantasy movie. We have so far made lots of efforts, and it's time to show them," Kim said.

Trump reiterated the DPRK’s potential, if a deal can be done, saying the isolated country could be an "economic powerhouse".

Trump said late last year he and Kim "fell in love", but there have been doubts about whether the bonhomie could move them beyond summit pageantry to substantive progress on eliminating a DPRK nuclear arsenal that threatens the US.