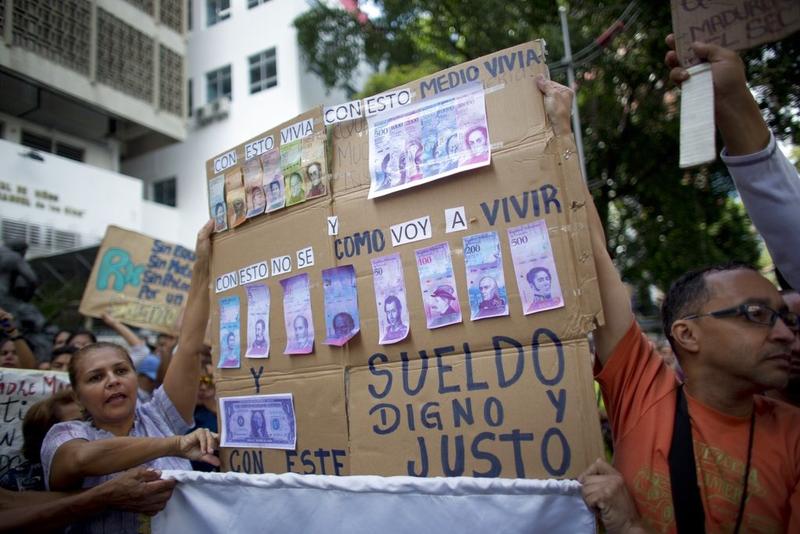 Nurses holds a sign with a fake Venezuelan's bills, representing how low their salaries have been devalued by inflation, during a protests against the government of President Nicolas Maduro, in Caracas, Venezuela, Aug 16, 2018. (ARIANA CUBILLOS / AP)

In one of the biggest economic overhauls of Maduro's five-year government, the former bus driver and union leader also said he would hike the minimum wage by over 3,000 percent, boost the corporate tax rate, and increase highly-subsidized gas prices in coming weeks.

"I want the country to recover and I have the formula. Trust me," Maduro said in a nighttime speech broadcast on state television.

But economists expressed doubts that Venezuelas cash-strapped government, which faces US sanctions and has defaulted on its bondholders, would succeed.

Venezuelans will see their meager salaries further eroded and companies will struggle with major increases to both taxes and the minimum wage, they said.

“Amid this aggressive devaluation and monetary expansions due to salaries and bonuses, we are expecting a much more aggressive stage of hyperinflation. All the more so in a context where the elimination of excessive money printing is not credible. The worst of all worlds,” said Venezuelan economist Asdrubal Oliveros of consultancy Ecoanalitica.

The International Monetary Fund has predicted that inflation in Venezuela would hit 1 million percent this year.

After a decade-long oil bonanza that spawned a consumption boom in the OPEC member, many poor citizens are now reduced to scouring through garbage to find food as monthly salaries amount to a few US dollars a month.

Hundreds of thousands of Venezuelans have emigrated by bus across South America in one of the region's worst migration crises.

"World champions in economic disasters!" opposition leader Henrique Capriles tweeted after Maduro's announcement. "No Venezuelan deserves to live this tragedy or that these incapable people destroy our nation!"

Maduro said he would overhaul Venezuela's disparate exchange rates and peg salaries, pensions, and prices to the petro, a cryptocurrency launched by the government earlier this year.

It was not immediately clear how the government intended to carry out the financial changes and the information ministry did not respond to a request for details.

Cryptocurrency experts have cast doubt on the petro as a functional financial instrument, citing a lack of clear details on how it operates and US sanctions that make it off limits.

US President Donald Trump in March signed an executive order barring any US-based financial transactions involving the petro, with officials warning that the Venezuelan cryptocurrency was a scam.

Venezuela's government has not provided a clear breakdown of petro investors or how much they have collected from the cryptocurrency's sale.

Maduro argues that he is the victim of a Washington-led "economic war" designed to sabotage his administration through sanctions and price-gouging. He has vowed that the petro will abolish the "tyranny" of the dollar and lead to an economic rebirth in Venezuela, home to the world's biggest crude reserves.

Economists, however, point to Venezuela's strict currency controls, botched nationalizations, and excessive money creation as the root causes of its economic crisis.

"They've dollarized our prices. I am petrolizing salaries and petrolizing prices," Maduro said. "We are going to convert the petro into the reference that pegs the entire economy's movements."

Maduro added that the minimum wage would amount to "half a petro," baffling some Venezuelans and sparking the Twitter hashtag #BlackFriday.