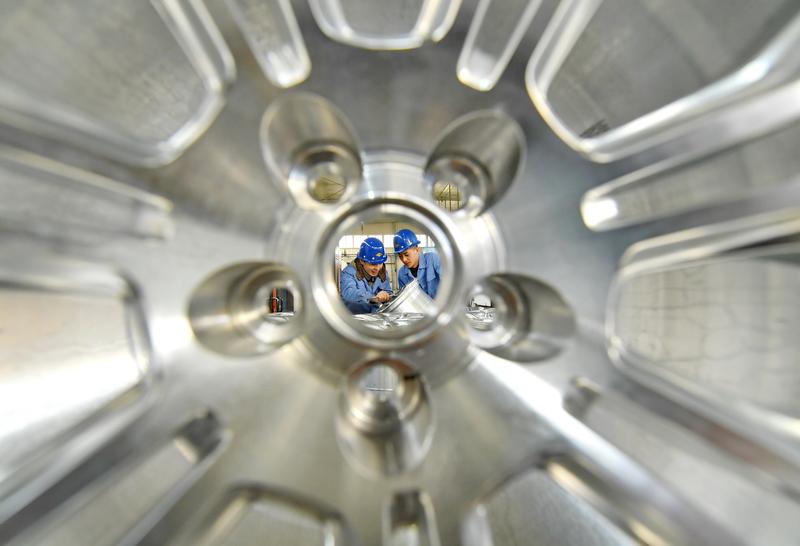 Analysts said the authorities need to continue implementing supportive policies, such as tax and fee reduction, to boost the economy.

The official PMI fell to 49.2 in February from 49.5 in January, marking the third straight month of activity contraction, according to data released by the National Bureau of Statistics on Thursday.

The official PMI fell to 49.2 in February from 49.5 in January, marking the third straight month of activity contraction

A reading above 50 indicates activity expansion while one below it indicates contraction.

In terms of the breakdown of the index, the output sub-index was 49.5 in February, down from 50.9 in the previous month, the lowest since the start of 2009 when the global financial crisis was at its height.

The easing of the output sub-index was mainly caused by disrupted factory activity during the week-long Lunar New Year holiday in February, the bureau said. Many firms scale back operations or close around the holidays, which began on Feb 4 this year.

The new orders sub-index rose to 50.6 from 49.6 in January, indicating that market demand has recovered moderately, said Zhao Qinghe, a senior official of the bureau, in a statement on the NBS website.

The sub-index for corporate activity expectations was 56.2, compared with 52.5 in January, the highest in four months, showing that the country's economy-stabilizing measures have taken effect to boost the morale of corporate managers, Zhao said.

However, the sub-index for new export orders dropped for the ninth straight month to 45.2 in February, down from 46.9 in January, and the import sub-index was 44.8, compared with 47.1 in the previous month, pointing to the complex foreign trade situation.

"Both global economic growth and global trade growth have slowed and China still faces pressure on the foreign trade front," said analysts from Zhongtai Securities in a research note. 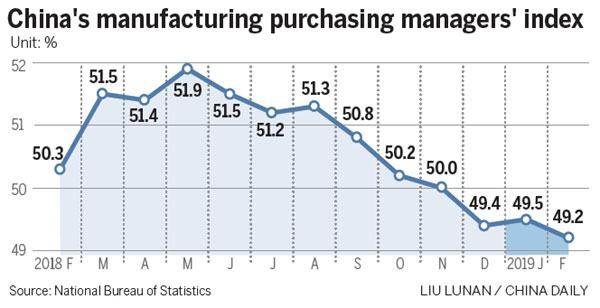 Unless the trade disputes between China and the United States "truly turns into an extended truce, the weakening trend may not end quickly", Iris Pang, an economist at ING, was quoted by Reuters as saying.

China has taken a series of supportive measures, such as tax cuts and fee reductions, to boost the corporate sector. In February, the sub-index of PMI for large-scale enterprises was 51.5, up from 51.3 in January, but that for the small and medium-sized enterprises was 46.9 and 45.3 respectively, both below the 50 mark.

"The stabilization policies have helped increase activities of big firms, but measures such as tax and fee cuts, financial support and administrative reforms that aim to facilitate doing business should be strengthened and they must be implemented in a faster manner," said a research note from Bank of Communications.

China's GDP growth may continue to dip in the first quarter and could start to stabilize and rebound from the second half of this year, it said.