Japan wrestling with Trump going to sumo during state visit 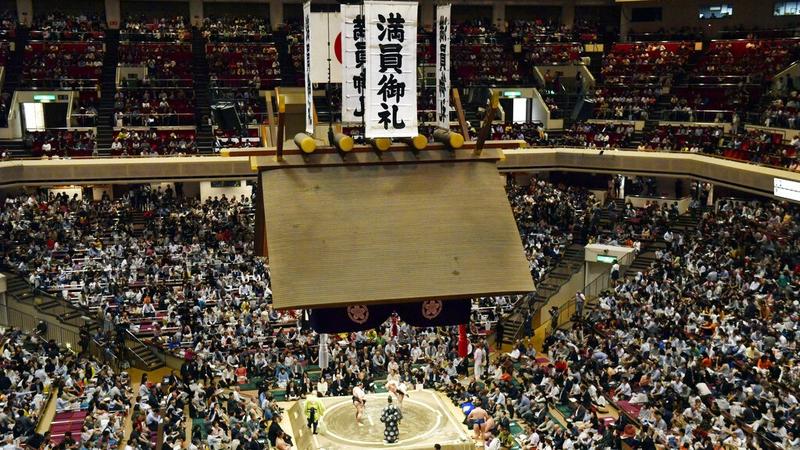 In this May 12, 2019, photo, banners thanking for a sellout crowd are displayed on the first day of Summer Grand Sumo Tournament in Tokyo. Plans for US President Donald Trump to check out the ancient Japanese sport of sumo wrestling during a state visit are raising security issues for organizers. (YOSHITAKA SUGAWARA / KYODO NEWS VIA AP)

TOKYO — Plans for US President Donald Trump to check out the ancient Japanese sport of sumo wrestling during a state visit are raising security issues for organizers.

Japanese Prime Minister Shinzo Abe is eager to have Trump and his wife, Melania, attend the final day of a 15-day tournament on May 26 and hand over a trophy to the winner.

The issue for organizers, Japanese media reports said Tuesday, is that more than 1,000 seats near the ring are generally sold out and buyers will all have to be checked in advance.

They may also have to ban the sale of canned beer in the front section, where Trump is expected to sit, the reports said.

Ring-side seats are coveted for sumo, an art-like sport that dates back to the 17th century, featuring overweight men in top-knots and loincloths bashing each other in a circular mud ring.

Trump's state visit from May 25-28 has regional security and trade issues on the agenda. He is also expected to be the first foreign dignitary to meet Emperor Naruhito, who inherited the Chrysanthemum Throne on May 1.

READ MORE: Japan resists US pressure on FX ahead of Abe-Trump summit

Every Japanese prime minister likes to trumpet close ties with this nation's most important ally. But Abe has made showing off close relations with Trump a key part of his profile.

Trump has said he is having a trophy made for the sumo winner, which Japanese media have already informally dubbed the "Trump Cup."

The winning wrestler gets several trophies, so adding another cup would not be a problem.

The ring-side seats called "masu seki," which cost about 10,000 yen (US$100) each, don't have chairs but are boxed in areas with Japanese "zabuton" mattresses for sitting on the floor. Seats up higher in the stands have chairs.

News Post Seven reported that putting in chairs was being considered to accommodate Trump. All entering Ryogoku Kokugikan, the venue in Tokyo, go through metal detectors and other standard security checks.

The Japan Sumo Association and the US Embassy declined comment Tuesday.