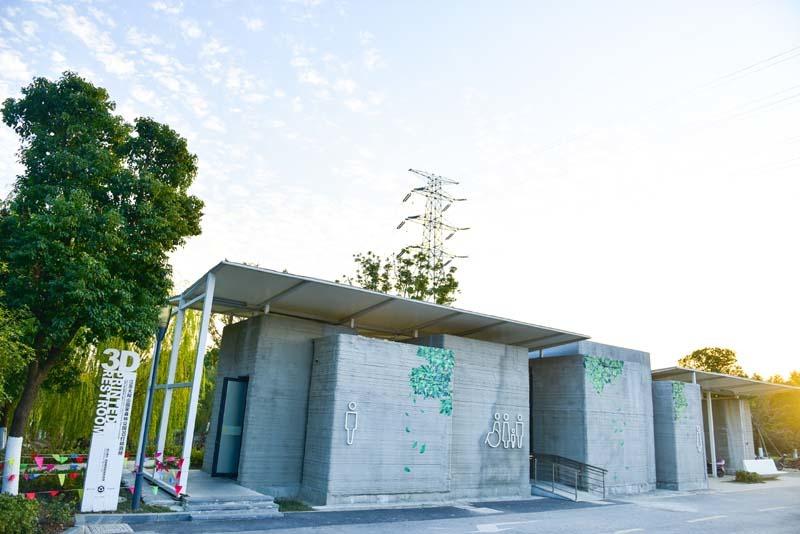 China's "toilet revolution" has moved up a gear with the news that the emphasis will shift from management of restrooms at tourist attractions to improving conditions in facilities in rural areas via the use of technology, said Li Jinzao, vice-minister of culture and tourism.

However, he stressed that providing visitors with the best travel experiences will remain a priority and the quality of tourist restrooms will be an important factor when attractions, resorts and hotels are assessed and rated.

The campaign to improve China's toilets, which highlights modern standards of hygiene and cleanliness, was launched in 2015 by the China National Tourism Administration, which was merged into the newly established Ministry of Culture and Tourism this month.

Since the campaign began, it has received more than 1 billion yuan (US$160 million) from the Ministry of Finance, while provincial authorities and businesses have invested more than 20 billion yuan.

Li, who was the head of then National Tourism Administration, said that while renovation of the sanitation infrastructure may seem negligible to individuals, the campaign addresses fundamental issues for visitors and will have a beneficial impact on people's health across the country. 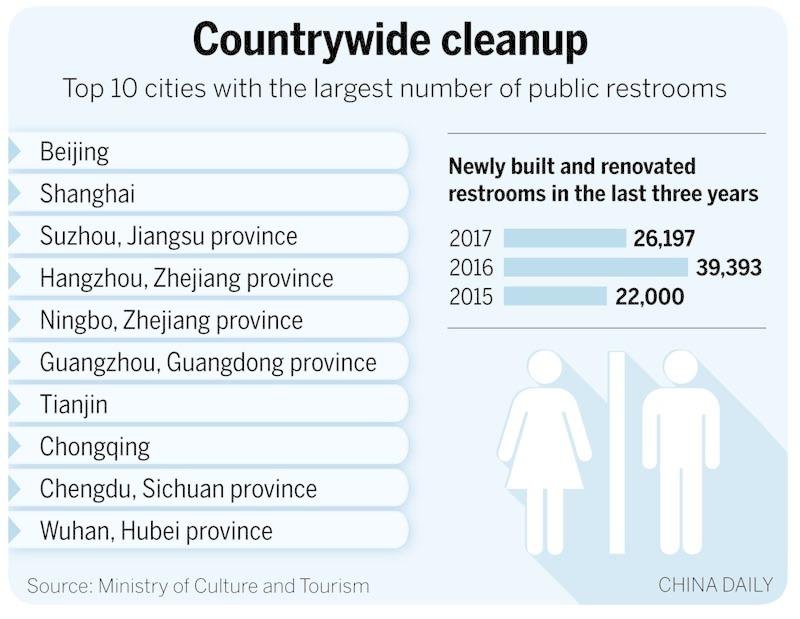 Poor management of sanitary facilities has long been an obstacle to the development of tourism, both urban and rural, and the improvement of public services according to Li.

In recent decades, tourism has made a huge contribution to China's economic development, but a lack of modern management techniques and poor infrastructure, especially low sanitary standards, have resulted in the sector failing to meet visitors' requirements.

"It's a huge number, so we require more facilities and high-quality services," Li said. To improve the situation, the ministry plans to raise the number of facilities and introduce unisex and family restrooms at tourist spots.

"The ratio of toilet stalls for males and females will be increased from 1-to-1 to 2-to-3, while in some popular travel destinations the ratio will be 1-to-2. Nearly 250 5A State-level scenic spots (the highest level and best maintained) will be fitted with family and unisex restrooms to offer convenience to seniors and people with disabilities," Li said.

Inappropriate behavior plus poor management of facilities and the technologies used in the renovation process remain problems that require action from individuals, companies and the government, according to the vice-minister.

"Uncivilized behavior, such as cutting in line, wasting water and toilet paper, and deliberately damaging facilities, cannot be changed in a short time," he said. "More creative and efficient promotional methods and tools, such as Weibo and WeChat, should be used to improve people's behavior." 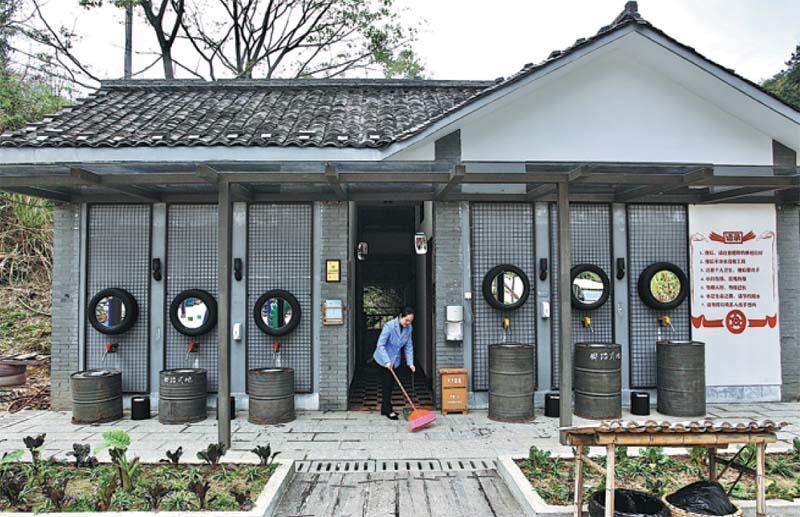 Restrooms with a number of themes have been built or renovated at Yashan Mountain scenic spot in southwest Jiangxi province. (ZHANG WEI / CHINA DAILY)

On Jan 5, the ministry and Amap, the provider of one of China's most popular navigation services, launched a "toilet navigation system" on the company's mobile app which allows users to quickly locate restrooms within a radius of 2 kilometers.

By early last month, nearly 15 million people had used the service, according to Amap, which emphasized that an effective sanitation system is not only closely linked with environmental protection, but also with standards of health and quality of life.

More than 500,000 public restrooms have already been included in the navigation system, and the number will rise to 1 million by the end of the year, the company said.

In addition to mobile apps, state-of-the-art technologies are being applied to the construction of facilities and the disposal of solid and semisolid human waste.

Facilities at Mount Sanqing National Park, a UNESCO World Heritage Centre in the northeast of Jiangxi province, have been fitted with smart toilets that automatically pack waste in biodegradable bags, which are held in storage tanks before being processed.

Construction of the 200-square-meter restroom, built with materials derived from recycled construction waste, was completed in just four weeks, and even though no reinforcing bars were used, the walls are harder than concrete.

The restroom won acclaim from the Ministry of Culture and Tourism, which made an award of 300,000 yuan for the innovative design and environmental benefits.

In addition to conventional sanitation facilities for both sexes, unisex and family toilets have been installed, while nursery rooms and lounges have been added to create the best possible user environment.

Looking to the future, international research institutes, including the California Institute of Technology and the Bill & Melinda Gates Foundation, are cooperating with high-tech companies in Jiangsu to provide technological support for the reconstruction of sanitary facilities in the province.

For example, research is being conducted into the use of microbiological fractionation, by which waste can be separated into its constituent parts by microbial action. 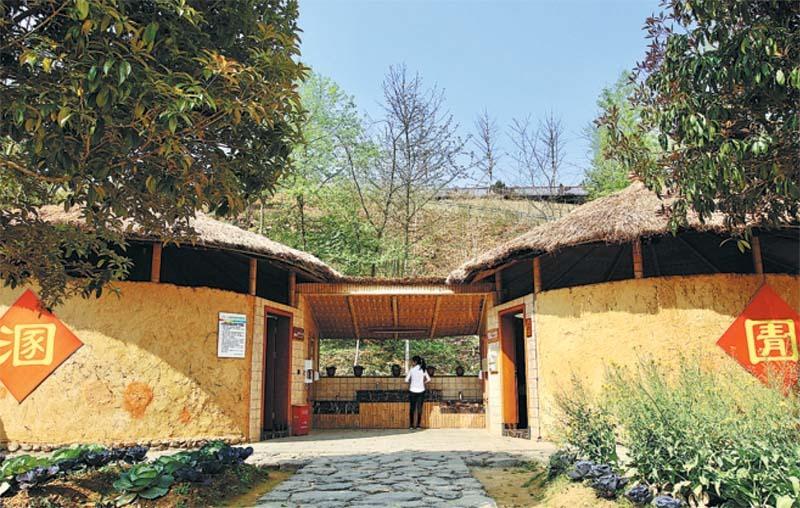 Restrooms with a number of themes have been built or renovated at Yashan Mountain scenic spot in southwest Jiangxi province. (ZHANG WEI / CHINA DAILY)

The cleanup campaign is also addressing the poor condition of sanitary facilities in rural areas to energize tourism and improve conditions for local residents.

Traditionally, rural areas use communal pit latrines which lack any form of flushing mechanism. That means combined solid and liquid waste, which accumulates until it has to be removed manually, may leach into the surrounding soil and pose a danger to health.

Last year, a pilot to test the use of vacuum extraction technology to remove waste and improve sanitary conditions was started at Yueliang village in Hengshui city, southeast Hebei province.

In 2016, the village was designated a tourist destination because of its royal gardens and traditional cultural relics. As a result, in October, the local government included Yueliang in its plans to renovate rural sanitation facilities.

By the end of last year, four public restrooms that use vacuum extraction systems had been built and 440 family homes had been fitted with toilets that use the technology. The extracted waste is used to produce fertilizer for organic vegetables and fruits grown on local farms, according to Feng Guozhao, Party secretary of Yueliang.

According to Li, the vice-minister, the improvement of sanitary facilities in the countryside should be tailored to the needs of local people and the prevailing conditions, so local governments should not simply copy the standards employed in urban areas and tourist resorts.

"More than two billion people have visited tourist attractions in rural areas, indicating that rural tourism has become one of the main drivers of the sector's development nationally," he said.

"Improving the infrastructure - renovating toilets, for example - in rural areas will help to lay a solid foundation for the development of rural tourism and lift villagers out of poverty."