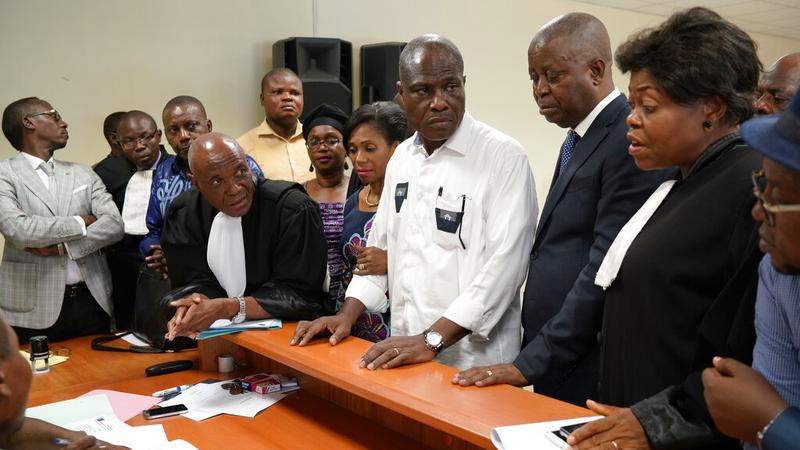 Accompanied by his wife and his lawyers, Congo opposition candidate Martin Fayulu, center, petitions the constitutional court following his loss in the presidential elections in Kinshasa, Congo, Jan 12, 2019. The ruling coalition of Congo's outgoing President Joseph Kabila has won a large majority of national assembly seats, the electoral commission announced on Jan 12, 2019, while the presidential election runner-up was poised to file a court challenge alleging fraud. (JEROME DELAY / AP)

KINSHASA, Congo — Congo's presidential runner-up Martin Fayulu has asked the constitutional court to order a recount in the disputed election, declaring on Saturday that "you can't manufacture results behind closed doors."

They call me the people's soldier ... and I will not let the people down

He could be risking more than the court's refusal. Congo's electoral commission president Corneille Nangaa has said there are only two options: The official results are accepted or the vote is annulled — which would keep President Joseph Kabila in power until another election. The Dec 30 one came after two years of delays.

"They call me the people's soldier ... and I will not let the people down," Fayulu said. Evidence from witnesses at polling stations across the country is being submitted to the court, which is full of Kabila appointees.

Rifle-carrying members of Kabila's Republican Guard deployed outside Fayulu's home and the court earlier Saturday. It was an attempt to stop him from filing, Fayulu said while posting a video of them on Twitter: "The fear remains in their camp."

Fayulu has accused the declared winner, opposition leader Felix Tshisekedi, of a backroom deal with Kabila to win power in the mineral-rich nation as the ruling party candidate, Emmanuel Ramazani Shadary, did poorly.

The opposition coalition for Fayulu, a businessman vocal about cleaning up widespread corruption, has said he won 61 percent of the vote, citing figures compiled by the Catholic Church's 40,000 election observers across the vast Central African country.

The church, the rare authority that many Congolese find trustworthy, has urged the electoral commission to release its detailed vote results for public scrutiny. The commission has said Tshisekedi won with 38 percent while Fayulu received 34 percent.

Earlier on Saturday, the commission announced that Kabila's ruling coalition had won an absolute majority of national assembly seats. That majority, which will choose the prime minister and form the next government, sharply reduces the chances of dramatic reforms under Tshisekedi.

Congolese now face the extraordinary situation of a presidential vote allegedly rigged in favor of the opposition. "This is more than an electoral farce; it's a tragedy," the LUCHA activist group tweeted, noting a ruling party majority in provincial elections as well.

This could be Congo's first peaceful, democratic transfer of power since independence from Belgium in 1960, but observers have warned that a court challenge could lead to violence.

During the turbulent years of election delays, many Congolese worried that Kabila, in power since his father was assassinated in 2001, was seeking a way to stay in office to protect his sprawling assets.

"Even if Tshisekedi's presidency survives these court challenges, he will be compromised beyond repair and reliant on Kabila, whose patronage network controls most of the country's levers of power, including the security forces," professor Pierre Engelbert, a fellow with at the Atlantic Council's Africa Center, wrote on Friday.

Statements on the election by the international community, including African regional blocs, have not congratulated Tshisekedi, with some looking forward to final detailed results and many urging against violence.

Congo's 80 million people have been largely peaceful since the vote, though the U.N. peacekeeping mission reported at least a dozen deaths in protests in Kwilu province. Authorities also noted demonstrations in Kisangani and Mbandaka cities.

Internet service has been cut off across the country since election day.

Tshisekedi, who has been largely quiet since the election, had not been widely considered the leading candidate. Long in the shadow of his charismatic father, the late opposition leader Etienne, he broke away from the opposition's unity candidate, Fayulu, to stand on his own.

After election results were announced, Tshisekedi said Kabila would be an "important partner" in the transition.

Fayulu, who was backed by two popular opposition leaders barred by the government from running, is seen as more of a threat to Kabila's interests.

The difference between Tshisekedi and Fayulu in official results was some 684,000 votes. One million voters were barred from the election at the last minute, with the electoral commission blaming a deadly Ebola virus outbreak. Elsewhere, observers reported numerous problems including malfunctioning voting machines and polling stations that opened hours late.

The presidential inauguration will be on Jan. 22, the electoral commission said Saturday.