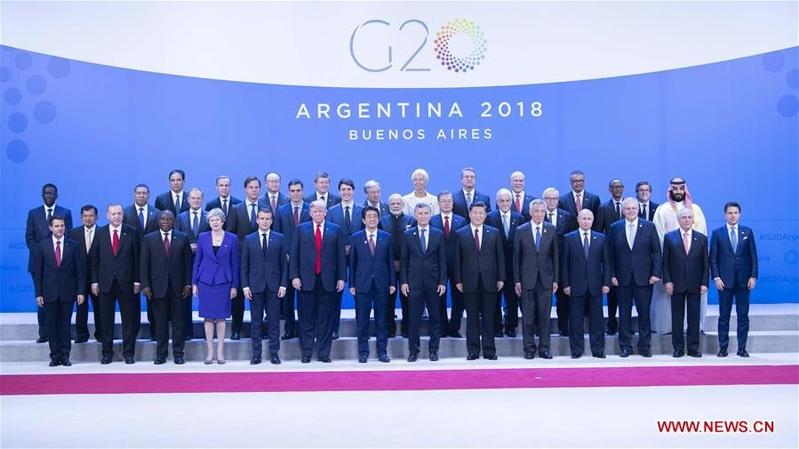 BUENOS AIRES — Argentine President Mauricio Macri on Friday welcomed the heads of state and government representatives attending the 13th summit of the Group of 20 (G20).

"This summit is an unprecedented event for our country. It is the first time in our country's history that so many world leaders have set foot in Argentina at the same time," said Macri from the Costa Salguero in the northern area of the Argentine capital, where G20 leaders meet.

The Argentine leader urged to work to achieve consensus for global governance and in favor of multilateralism for the next 10 years, while also ratifying the importance of dialogue as a means to settle current differences between countries.

"In a diverse world, with so many different protagonists with their own background and culture, the spirit of the G20 is to promote a dialogue that is respectful of differences and to foster actions based on common interests," he said.

He indicated that the global challenges require global solutions, and at the same time said consensus "cannot be reached overnight" and they are processes "with its ups and downs" that continue beyond the summit.

ALSO READ: All you need to know about Argentina G20 summit

"For me, the solution is dialogue, dialogue and dialogue. It's the way to push the limits of what is possible; understanding that every country has its preferences, values and interests, but we all agree on something: we want to promote sustainable development," he said.

The G20 started out in 1999 as a meeting of finance ministers and central bank governors.

In 2008, amidst the global financial crisis, it evolved into what it is today: a major forum for dialogue and decision-making attended by world leaders from vital economies.

Together, the G20 members represent 85 percent of global GDP, two-thirds of the world's population, and 75 percent of international trade.