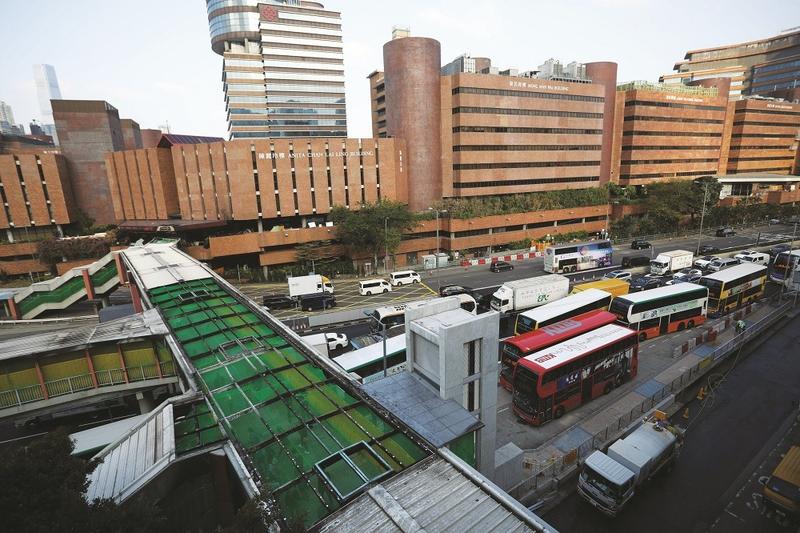 Various vehicles wait to enter the Cross-Harbour Tunnel which reopened on Wednesday. A footbridge connecting Hung Hom MTR station and the Hong Kong Polytechnic University is back into use as well while its damaged roofs were replaced with safety nets. (PHOTO / CHINA DAILY)

Police confirmed on Wednesday they will enter the Hong Kong Polytechnic University on Thursday (today) morning.

The move comes after the university informed the force that the campus has been severely damaged. In addition, many dangerous items were left by the radical students and rioters who barricaded themselves at the university for about two weeks.

A special team accompanied by criminal investigation officers will be the first to enter the campus, said Ho Yun-sing, police commander of Yau Tsim district.

Ho told a news briefing on Wednesday that officers will remove dangerous materials, including gasoline bombs, corrosive liquids and other offensive weapons believed to be stored on the premises. They will also collect evidence of vandalism and other criminal acts done to university property, Ho said.

It is the duty of police to ensure the campus is safe before handing it over to university management, the police commander said. Ho added that the police aim to reopen the campus as soon as possible.

Riot police will not be deployed, and Ho stressed that any remaining person found on the campus during this operation will be sent for a medical checkup first. Ho also said he hoped the operation will take no more than a day.

On Wednesday, a 100-member search team comprising faculty members, medics and social workers entered the campus in Hong Hum and found no stragglers.

In an earlier search on Tuesday, the team found one person who had been left behind. 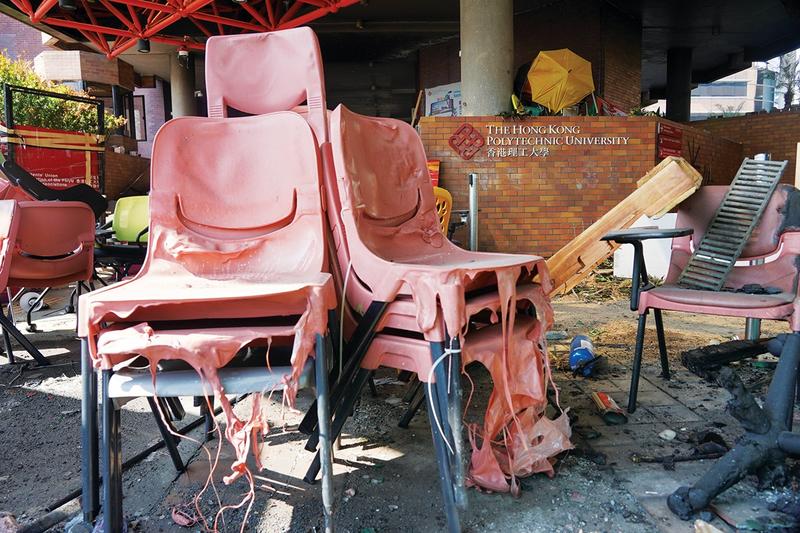 The campus of the Hong Kong Polytechnic University is a terrible mess. Debris, umbrellas and chairs used as barriers are left abandoned. (GAO ERQIANG / CHINA DAILY)

Authorities of PolyU have urged police to lift the 11-day siege to reopen the campus for cleanup and repair work.

Miranda Lou Lai-wah, executive vice-president of PolyU, said the university hopes to reclaim the campus soon, because a great number of damaged facilities, including classrooms and laboratories, need to be repaired so research projects can resume.

Radicals set up barricades, hurled gasoline bombs at Cross-Harbour Tunnel toll booths, and set fire to two footbridges that connect the PolyU campus. They then fortified themselves in the campus on Nov 13 after clashing with police.

As of Wednesday, about 1,100 protesters, about 40 of whom are PolyU students, had left the campus, said Lam Tai-fai, chairman of the PolyU Council. Most of them were arrested as they left; those needing medical attention were hospitalized. Underage protesters were released after police checked and recorded their personal data for follow-up action — if necessary.

The Cross-Harbour Tunnel reopened at 5 am on Wednesday after the government finished repairs of the busy crossing’s facilities which had sustained extensive damage inflicted by the rioters.