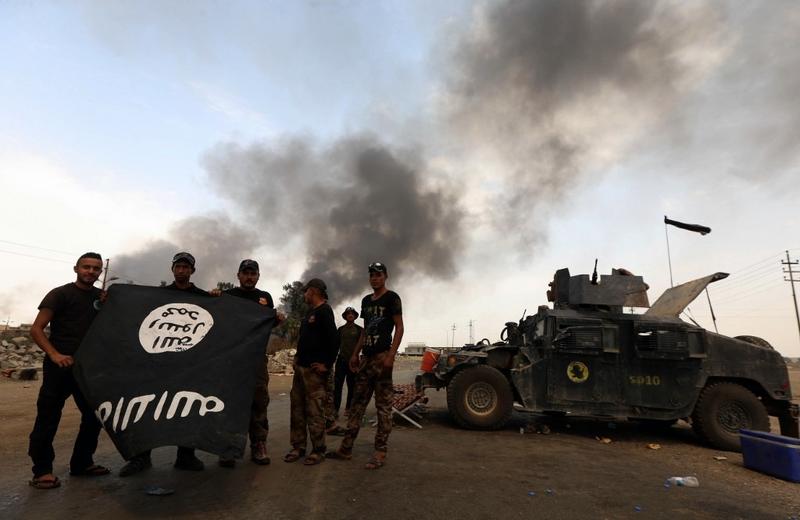 Members of the Iraqi government forces hold an Islamic State (IS) group flag upside down as smoke billows from oil wells, set ablaze by IS militants before fleeing the oil-producing region of Qayyarah, Aug 30, 2016, after Iraqi forces pushed the jihadists out of the northern town on the banks of the Tigris river. (SAFIN HAMED / AFP)

UNITED NATIONS — Leaders of the Islamic State extremist group are aiming to consolidate and create conditions for an "eventual resurgence in its Iraqi and Syrian heartlands," UN experts said in a new report.

The UN report stated "the most striking international developments" during the first six months of 2019 include "the growing ambition and reach of terrorist groups in the Sahel and West Africa," where fighters from IS and al-Qaida are collaborating to undermine fragile countries

The panel of experts said in a report to the Security Council this week that the process is more advanced in Iraq, where IS leader Abu Bakr al-Baghdadi and most of the militant group's leadership are now based following the fall of the so-called "caliphate" that he declared in the two neighboring countries.

In Syria, where the last IS stronghold was toppled in March, the IS covert network is spreading and sleeper cells are being established at the provincial level, mirroring what has been happening in Iraq since 2017, according to the report.

As for al-Qaida, the panel said the extremist group "remains resilient" though its immediate global threat is not clear, with its leader, Ayman al-Zawahiri, "reported to be in poor health and doubts as to how the group will manage the succession."

The report stated "the most striking international developments" during the first six months of 2019 include "the growing ambition and reach of terrorist groups in the Sahel and West Africa," where fighters from IS and al-Qaida are collaborating to undermine fragile countries. "The number of regional states threatened with contagion from insurgencies in the Sahel and Nigeria has increased," said the experts, who monitor UN sanctions against both extremist groups. 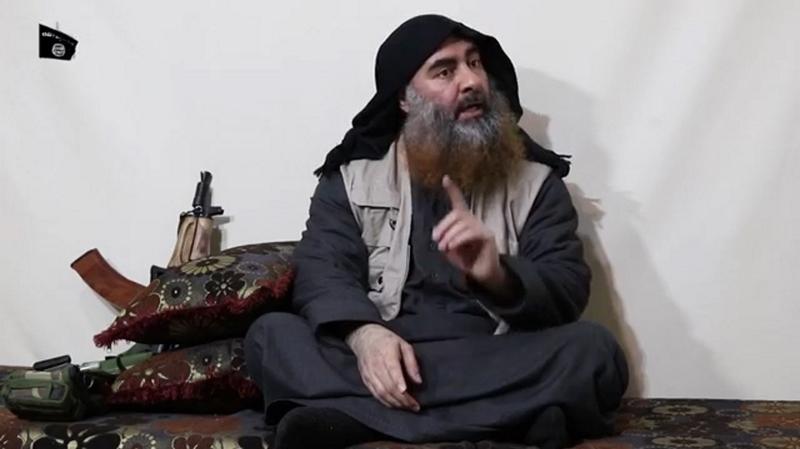 In this undated tv grab taken from a video released by Al-Furqan media, the chief of the Islamic State group Abu Bakr al-Baghdadi purportedly appears for the first time in five years in a propaganda video in an undisclosed location. (AL-FURQAN MEDIA / AFP)

In a video message in late April, al-Baghdadi said IS "still aspires to have global relevance and expects to achieve this by continuing to carry out international attacks," the panel said.

The experts said IS, which is also known as ISIL, is currently dependent on attacks that it inspires like the Easter Sunday church bombings in Sri Lanka. Al-Baghdadi mentioned the bombings but the panel said IS leaders "clearly knew nothing" in advance.

Whether or not the Sri Lankan attacks were motivated by a previous attack on Muslims at mosques in Christchurch, New Zealand, in March, "the narrative of interfaith conflict is concerning," the panel added.

Looking ahead, the experts said the Islamic State group "will reinvest in the capacity to direct and facilitate complex international attacks when it has the secure space and time to do so." The panel added, "The current abatement of such attacks, therefore, may not last long, possibly not even until the end of 2019."

The panel said up to 30,000 foreign fighters and others who traveled to the so-called "caliphate" that IS established in parts of Iraq and Syria may still be alive, "and their future prospects will be of international concern for the foreseeable future."

Outside Syria and Iraq, the experts said, IS and al-Qaida are contending "for dominance and international relevance." They said that in Afghanistan, concerns remain about short-term and long-term threats posed by groups affiliated with both IS and al-Qaida as well as "foreign terrorist fighters who have established themselves on Afghan territory."

Here are the experts' assessments of threats posed by IS and al-Qaida in other regions:

Arabian peninsula — Regional member states say the temporary strategy of al-Qaida in the Arabian Peninsula is to prioritize the fight against the IS affiliate in Yemen to maintain its dominant position, rather than fight Houthi Shi'ite rebels who are in a war with the government, which is backed by a Saudi-led coalition. An unidentified country reported that al-Qaida has been unable to establish itself in Saudi Arabia.

Africa — IS activity in southern Libya gained momentum as a result of preoccupation with fighting around the capital of Tripoli, and the extremist group is assessed to have substantial financial resources seized when it controlled the city of Sirte. A sharp rise in violence and recruitment efforts in West Africa, motivated by IS or al-Qaida affiliates, has been exacerbated "by porous borders and authorities ill-equipped to confront the growing threat." In Somalia, al-Qaida affiliate al-Shabab has shifted from high-impact attacks to sustained, frequent and eventually daily multiple attacks.

Asia — Countries in central Asia see the greatest threat from their nationals returning from Iraq and Syria, and to a lesser extent from Afghanistan. In Southeast Asia, a series of successful and thwarted attacks attributed to IS-affiliated groups "underscores the persistent nature of the threat in the region."