Steady growth to continue in 2019

By Xu Wei and Chen Jia 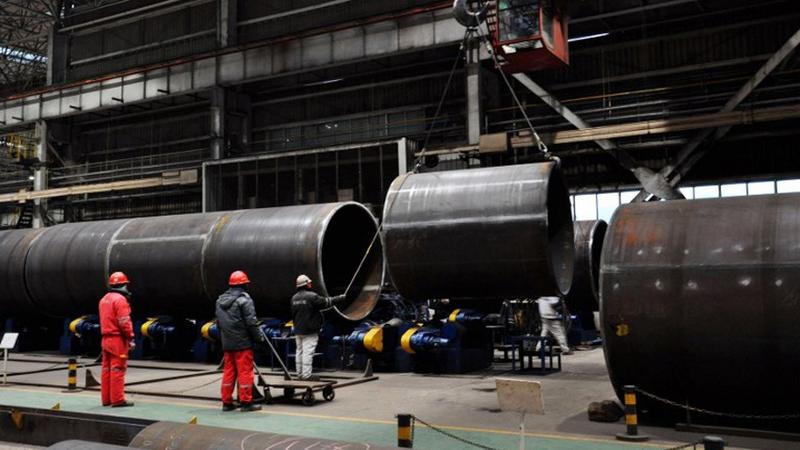 In this Jan 31, 2018 photo, Chinese workers use a crane to lift the shells of a steel pipe at a factory in Qingdao in China's eastern Shandong province. China will keep its major economic indicators within a reasonable range next year, continue to speed up reform in the economic system and push forward all-around opening-up, according to a meeting of the Political Bureau of the Communist Party of China Central Committee on Dec 13, 2018. (PHOTO / AFP)

China will keep its major economic indicators within a reasonable range next year, continue to speed up reform in the economic system and push forward all-around opening-up, according to a meeting of the Political Bureau of the Communist Party of China Central Committee on Thursday.

Xi Jinping, general secretary of the CPC Central Committee, chaired the meeting, which also vowed to stabilize employment, the financial sector, foreign trade, investment and expectations and to continue the steady and healthy development of the economy in 2019.

The country will continue to uphold the underlying principle of pursuing progress while ensuring stability as well as the new development philosophy, and to advance high-quality development, said a statement released after the meeting.

More work will be done to boost market confidence and improve the sense of advancement, happiness and security among the people, it said.

Next year, which marks the 70th anniversary of the founding of the People's Republic of China, is also a key year to secure the decisive victory in building a moderately prosperous society, the statement said.

The country will continue to uphold supply-side structural reform as the main task, deepen the reform in line with market principles and expand high-level opening-up, it said.

The three battles against potential financial risk, poverty and pollution will continue to be prioritized, and more efforts will go toward stimulating the vitality of micro entities and innovating in and refining of macro regulation, it said.

The statement said it is important to put the change in international circumstances and the domestic situation into a dialectical perspective, guard against potential dangers in times of peace and seize the important period of strategic opportunity for the country.

"(We should) shore up confidence, take the initiative and resolutely focus on tasks at hand," it said, vowing to strengthen coordination and cooperation, focus on major contradictions, grasp the pace and strength of the economy, and strive to achieve the best policy mix and the maximum overall effect.

More work will be done next year to promote high-quality development in the manufacturing sector and enable deeper integration between advanced manufacturing and the modern service sectors, meeting participants also decided.

The country will promote the shaping of a strong domestic market, improve the level of integrity of the national economy, take solid steps to push forward the rural vitalization strategy and move forward with coordinated regional development, the statement said.

China's economy expanded by 6.7 percent in the first three quarters of this year, which slightly exceeded the government's target of around 6.5 percent, according to the National Bureau of Statistics. The CPC Central Committee usually holds an annual conference on economic work at year's end.

The Political Bureau meeting followed a symposium convened by the CPC Central Committee on Tuesday to solicit opinions and suggestions on economic work from those not in the Party.

Xi called on those outside the Party to unify their thoughts and actions with the analysis, judgment and decisions of the CPC on economic work and make greater contributions to lasting and healthy economic growth.

Some experts have highlighted the need to strengthen the market's confidence to stabilize the overall economic environment next year.

"Stabilizing investors' expectations is the foundation for implementing other economic measures," said Zhang Lianqi, a member of the Standing Committee of the Chinese People's Political Consultative Conference, the nation's top political advisory body.

Zhang Chunsheng, a professor at the Central University of Finance and Economics, expected that next year's macroeconomic policies will be more flexible, targeted and well coordinated. "A set of specific policies, targeted to solve diversified problems emerging in different regions and industries, will be launched at the proper time."

"The Chinese government's easing policies so far have been focused on preventing a systemic financial crisis and credit freeze," said Lu Ting, an economist with Nomura Securities. Other policies could support growth, such as strengthening investment in infrastructure construction, in the face of headwinds in the first half of next year, he said.

The meeting also planned work for building good conduct and political integrity within the CPC as well as fighting corruption.

It outlined the Party's efforts next year to further ensure clean governance and fight corruption, emphasizing the need to explore innovation and achieve breakthroughs in routine and long-term supervision.

The graft fight remains serious and complex, and it is imperative to make strict governance over the Party a long-term commitment so that the Party can purify, improve and reform itself, the statement said.

The meeting also called for innovations in the mechanism for disciplinary inspection and supervision and making supervision duties more concrete.