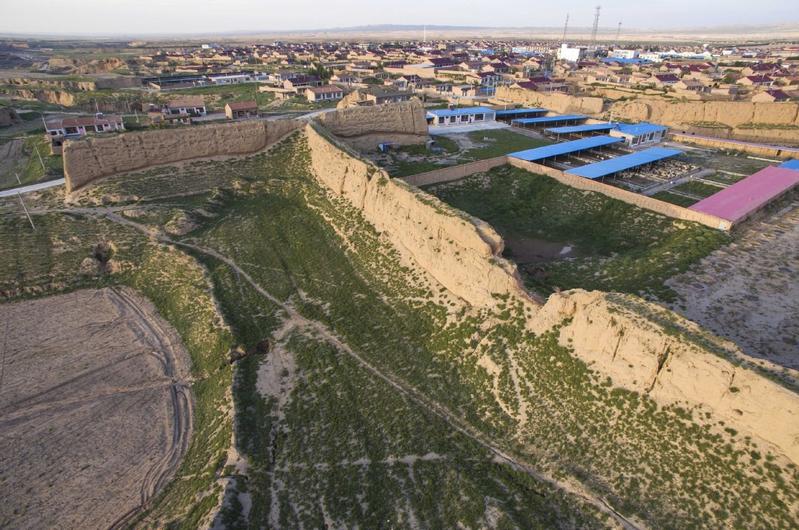 When Mao Zedong stood on top of the Liupan Mountains in China's northwestern Ningxia Hui autonomous region, the founder of New China said, "One who fails to reach the Great Wall is not a hero."

Today, the Great Wall in Beijing is one of the most symbolically significant and culturally important structures in China, attracting many tourists and researchers to visit it. However, the part of the wall that once impressed Mao has been neglected.

The Ningxia site of the Great Wall is one of the oldest wall relics in the country. This fortified structure bordered between the nomadic and farming civilizations in ancient times, and it was largely built across the region. However, over the past several hundred years, it has been badly damaged by climate change and human activity.

The Ningxia site of the Great Wall is one of the oldest wall relics in the country. This fortified structure bordered between the nomadic and farming civilizations in ancient times, and it was largely built across the region

Following economic changes and social developments in the 20th century, the Ningxia locals started paying attention to the potential value of the Great Wall in historical studies and tourism. Hence, many "protectors" wanting to restore the lost greatness of the wall have appeared. Ma Jianjun is one of them.

Ma, a member of the Hui ethnic group, born and raised in Ningxia, developed a strong interest in history because of his passion for the Great Wall when he was young. Now, as the 52-year-old director of Ningxia's Conservation Center of Cultural Heritage, Ma has devoted himself to the restoration of the structure.

Since graduating with a degree in history from Minzu University of China in 1990, Ma has been working in heritage conservation. He started his career as a researcher at Guyuan Museum in Ningxia.

"Everything was just as I expected. I did not hesitate to take that job in the museum after graduation," Ma said.

"I am very pleased that the museum offered me a great chance to be with cultural relics every day as an archaeological researcher."

Ma spent 22 years in Guyuan Museum, and he participated in many restoration projects such as surveying and mapping the Ningxia ancient city, and the reinforcement, research and restoration of movable cultural relics from the Western Xia period (1038-1227).

In 2012, Ma was transferred to the regional museum in Yinchuan, capital city of Ningxia. A year later, he participated in the Great Wall restoration project.

"Unlike the Great Wall in Beijing, builders used rammed earth to build the wall and they made use of local materials. The height of the wall ranges from one to three meters high, with flanking towers protruding from the wall every 200 to 300 meters on average," Ma said.

In order to restore the ancient wall without changing its original state, Ma and his colleagues conducted countless experiments on the structure, materials and layers of the wall.

The Great Wall in Ningxia was constructed over many historical periods between the Warring States Period (475-221 BC) and the Ming Dynasty (1368-1644). It has a total length of 1,038 kilometers

"Most members of our repair team were exhausted from tamping the earth again and again. We cannot allow large machinery, chemical products and additives to be used during the restoration in order to simulate the construction process of the ancient Great Wall as much as possible," he said.

Based on research and studies, Ma and his colleagues wrote a book about the ancient Great Wall in Ningxia in 2014. That same year, Ma took full charge of the restoration project when he became director of Ningxia's Conservation Center of Cultural Heritage.

"We plan to finish the restoration in 2035. As it is a major restoration project in our region, I felt pressure ever since I took over the 'mission', but I do believe in myself and our team that our effort and persistence will pay off," he said.

Currently, restoration of the Ningxia Great Wall has been carried out with construction teams stationed at most key sections, and more than a dozen key sites have been repaired.

"Every time I visit the Great Wall, I feel as if I am going through history and talking to people and things in the past," Ma said.

"Over the past few decades, I have been fascinated by the profound history and culture of my country through the study of historical relics."