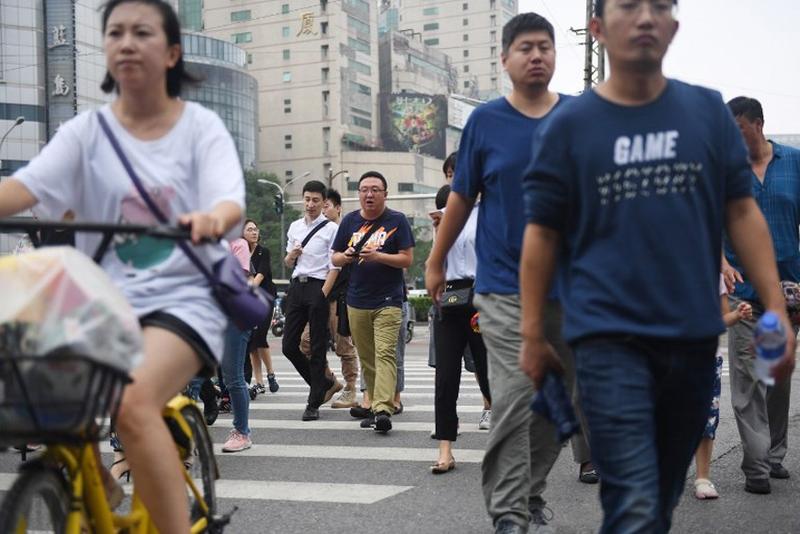 In this July 16, 2018 photo, people cross a road in a commercial district in Beijing, China. Despite drop in new births, China expects a relatively steady population growth for the near future, said an official. (GREG BAKER / AFP)

BEIJING – China expects a relatively steady population growth for the near future despitea drop in new births, according to an official of the country’s National Bureau of Statistics (NBS).

China is aging further with the share of people at and above 60 years old in the total population rising by 0.6 percentage points last year

New births are predicted to continue to drop each year for some time in the future but still outnumber deaths, and China has a large pool of about 100 million women of childbearing age, Li Xiru, head of the population and employment statistics department with the NBS, wrote in an article.

Population in the mainland totaled 1.39 billion by the end of last year, up 5.3 million people and 3.81 thousandths year on year, while new births reached 15.23 million in 2018, with the birth rate dipping to 10.94 thousandths.

READ MORE: China will have declining population around 2028

China decided in 2015 to allow couples to have two children in a bid to boost new births and deal with a greying population.

The country is aging further with the share of people at and above 60 years old in the total population rising by 0.6 percentage points last year.

China's total employed population dropped for the first time in history in 2018 and is likely to fall further in the next few years, according to Li.

However, China has a workforce pool of about 900 million people, with some 780 million of them in employment, with big room for improving labor force participation rate and workforce quality, Li added.