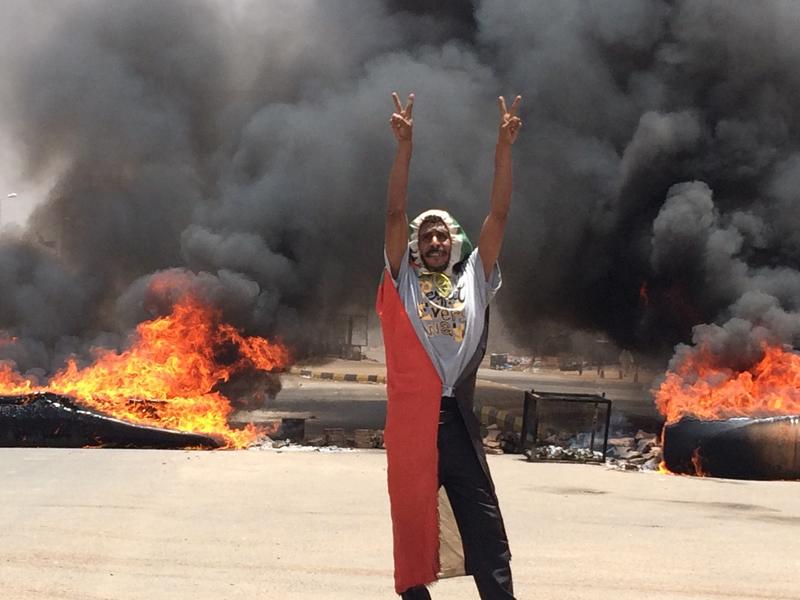 A protester flashes the victory sign in front of burning tires and debris on road 60, near Khartoum's army headquarters, in Khartoum, Sudan, June 3, 2019. (PHOTO / AP)

KHARTOUM — Sudan's opposition on Tuesday rejected a plan by its military rulers to hold elections within nine months, a day after the worst bout of violence since Omar al-Bashir was ousted as president in April.

"What happened, killing protesters, wounding and humiliation, was a systematic and planned matter to impose repression on the Sudanese people."

Madani Abbas Madani, a leader of the Declaration of Freedom and Change Forces

At least 35 people were killed on Monday when security forces stormed a protest camp outside the Defence Ministry in central Khartoum, according to doctors linked to the opposition.

The military council that has ruled since Bashir's overthrow afterwards cancelled all agreements with the main opposition alliance and said an election should be held within nine months.

But Madani Abbas Madani, a leader of the Declaration of Freedom and Change Forces opposition alliance, said a civil disobedience campaign would continue to try to force the council from power.

"What happened, killing protesters, wounding and humiliation, was a systematic and planned matter to impose repression on the Sudanese people," he said.

The leaders of protests that forced Bashir from power after three decades of authoritarian rule in April have demanded preparations for elections during a transitional period led by a civilian administration.

The military council has also been under both domestic and international pressure to hand over power to civilians. 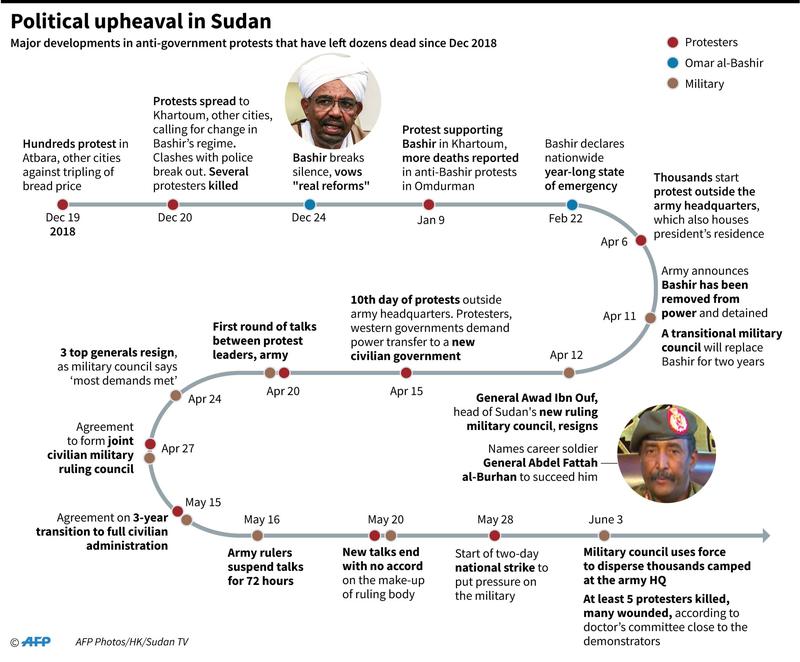 This AFP graphic shows a chronology of main developments in mass protests in Sudan.

The main protest organizers, the Sudanese Professionals Association (SPA), accused the security forces of perpetrating "a massacre" when they raided the camp amid heavy gunfire.

Sudan has been rocked by unrest since December, when anger over rising bread prices and cash shortages broke into sustained protests that culminated in the armed forces ousting Bashir.

But talks between a coalition of protesters and opposition parties ground to a halt amid deep differences over who will lead a transition to democracy that both sides had agreed will last for three years.

In a televised address in the early hours of Tuesday morning, council leader Burhan said the opposition coalition was equally responsible for the delay in coming to a final agreement.

The council had decided to cancel all agreements with the protest groups and called for elections within nine months, which he said will be organized under regional and international supervision.

"Gaining legitimacy and a mandate does not come but through the ballot box," Burhan said. 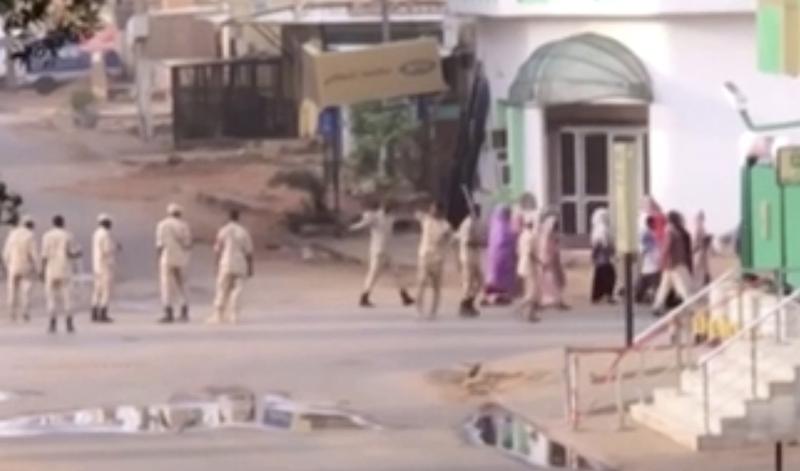 In this image made from video, Sudanese forces escort civilian in Khartoum, Sudan, June 3, 2019. (PHOTO / AP VIA AP VIDEO)

He also announced that a government would immediately be formed to run the country until elections are held.

Burhan also said he regretted the violence and it would be investigated.

The security forces' operation drew condemnation from Europe, the United States and the African Union.

The European Union urged a speedy transfer of power to civilians. Neighbouring Egypt called for "calm and restraint", while the United Arab Emirates (UAE) said it hoped that dialogue would prevail in Sudan.

The Soufan Group, a security and intelligence think-tank, warned that the situation could escalate swiftly to more violence.

"There are clear parallels to some of the Arab Spring protests that eventually progressed to full-blown insurgencies, including Syria, where indiscriminate shelling of civilians by the military initially galvanized protest movements that helped launch a broader uprising," it said in an analysis.

"There is a real risk that the situation could spiral into full-blown civil war, which would significantly affect the region, with spillover violence impacting the ongoing conflict in Libya." 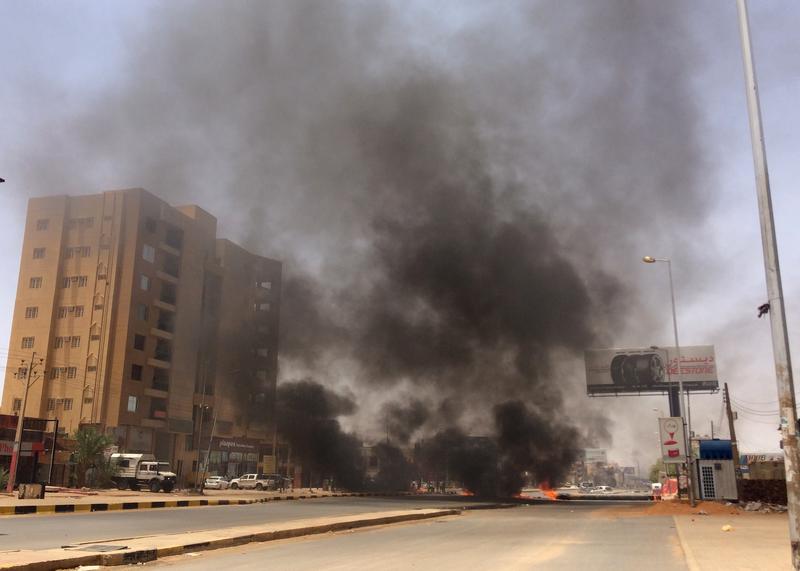 Sudan has been on a US list of states that sponsor terrorism since 1993 that denies the country access to financial markets and strangles its economy.

Washington lifted a 20-year trade embargo against Sudan in 2017 and was in discussions to remove it from the sponsor of terrorism list when the military stepped in to depose Bashir.