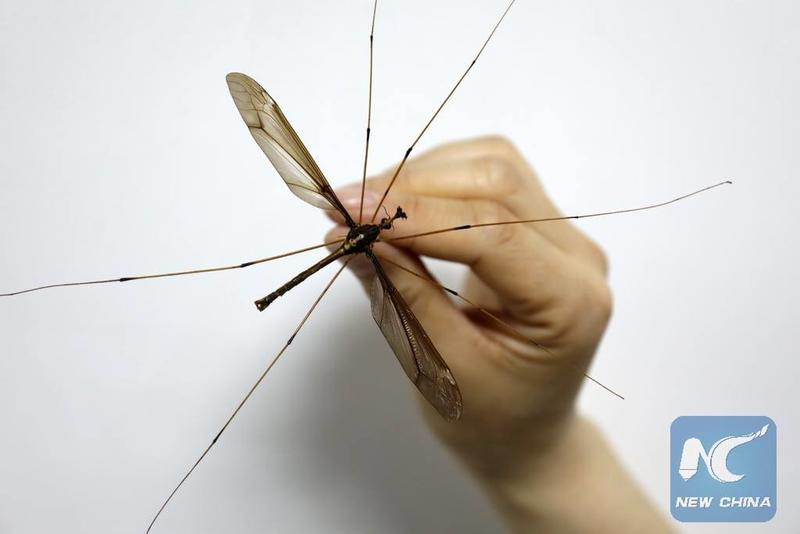 A giant mosquito with a wing span of 11.15 centimeters is shown at the Insect Museum of West China in Chengdu, capital of SW China's Sichuan Province, April 11, 2018. (PHOTO PROVIDED BY INSECT MUSEUM OF WEST CHINA VIA XINHUA)

CHENGDU - A Chinese entomologists has found a giant mosquito with a wing span of 11.15 centimeters.

Zhao Li, curator of the Insect Museum of West China, said the mosquito, which belongs to the world's largest mosquito species Holorusia mikado, was found in August last year during a field trip to Mount Qingcheng in Chengdu, capital of southwest China's Sichuan province.

First found in Japan and named by British entomologist John Obadiah Westwood in 1876, the Holorusia mikado species normally have a wing span of about eight centimeters.

"These mosquitoes look horrendous, but do not feed on blood. The adults have a life span of only a few days and mainly feed on nectar," he said.

"There are tens of thousands of types of mosquitoes in the world. Barely 100 species feed on blood and may be a problem for humans," he said.

In the western parts of Sichuan, Holorusia mikado, also known as the crane fly, are mainly found in the Chengdu plain and in mountainous areas below 2,200 meters.

"They are weak fliers because of their big bodies. When they fly, it is more like hopping. More often than not, they are found in areas with dense vegetation," he said.

The museum, though privately run, is a national-level museum. It houses over 700,000 specimens, over 70 of which are largest or longest in their species.