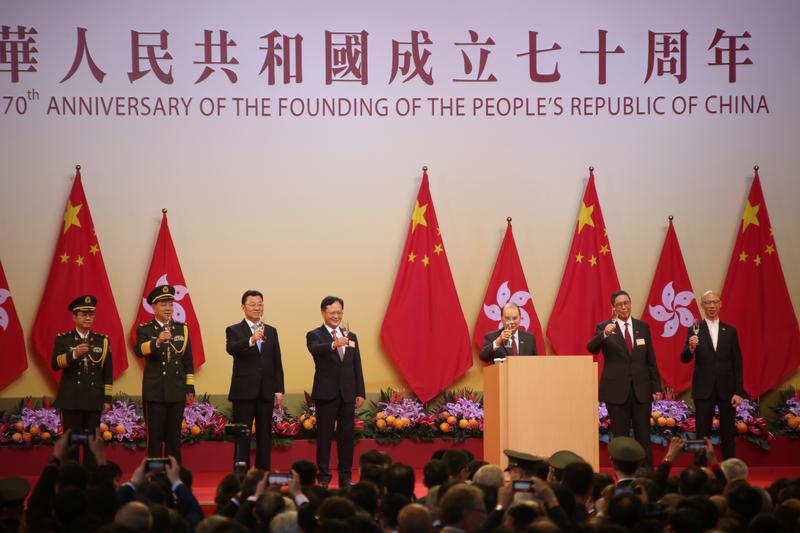 "We will also be inviting community leaders, professionals and academics to conduct independent studies and reviews of society's deep-seated problems. These include housing and land supply, wealth gap, social justice, opportunities for young people, upward social mobility and public engagement in policy-making. Their recommendations will help the government grasp the crux of the problems and identify practical solutions that can break the deadlock," Cheung said in his speech at a reception held after the flag-raising ceremony.

The central government "has been strongly supportive to the HK chief executive and the SAR...,” acting Chief Executive Matthew Cheung said

Last week, Chief Executive Carrie Lam  Cheng Yuet-ngor conducted the first community dialogue in a bid to defuse anti-government sentiments and seek solutions to the political deadlock that the city is facing.

Lam is currently leading a delegation to Beijing to participate in activities to celebrate the 70th anniversary of the founding of the People's Republic of China.

The central government "has been strongly supportive to the Hong Kong chief executive and the SAR to govern effectively,” Cheung said, referring to the special administrative region. “Hong Kong has been successfully following one country, two systems.”

"Since its establishment, the HKSAR government has received the full support of our country under the policy of "one country, two systems" and successfully warded off the impact of the Asian financial turmoil in 1997, the epidemic of severe acute respiratory syndrome in 2003 and the international financial crisis in 2008," Cheung said in his speech.

The country has been transformed into an open, progressive, prosperous and rejuvenated nation after it went through severe tests and challenges with indomitable spirit over the past seven decades, said Cheung.

Hong Kong, in the meantime, has used its strengths to serve the country's needs and benefited from its rapid development, said Cheung.

The rising living standards of people on the mainland and Hong Kong shows that the country and city share common development and prosperity, he said.

Cheung pledged that Hong Kong will continue to adhere to the principle of "one country, two systems" and the Basic Law, defend the rule of law and maintain public order, safeguard national sovereignty, security, and development interests, and seize the opportunity of developing a diversified economy.

Only through these efforts will Hong Kong continue to thrive in the future, he said.

He also warned about the economic fallout from the protests, saying “trade relationships have turned complicated in recent months and are getting severe.”

A flag-raising ceremony was held at the Golden Bauhinia Square Tuesday morning. Helicopters of the Government Flying Service flew over Victoria Harbor displaying China's national flag and the regional flag of the HKSAR. Some ships in the sea gave water salute.

Riot police guarded the Hong Kong Convention and Exhibition Centre where government officials and other guests viewed the ceremony amid worries that protesters would try and disrupt the event.

People from all walks of life in Hong Kong took part in various activities to express their blessings and love for the motherland, with songs and flags the most popular signifiers.

Hundreds of students at the Hong Kong University of Science and Technology watched the military parade and mass parade held in Beijing on television live in a lecture hall.

They then organized a flash-mob style gathering on campus, singing patriot songs to express their pride.

Most of them have felt a little frustrated at the recent turmoil, he said.

The participants were thrilled to see the advanced development of their motherland, said Zhang.

When the national anthem rings out, all got up from their seats and sang along with their compatriots in Beijing. They also cheered and applauded as the mighty troops and weapons appeared on screen, Zhang said.

"The singing echoed around the campus and red flags fluttered. Such courage and unity are undoubtedly more precious in the special period," said organizers in a statement thanking participants.

A group of Hong Kong people brought an eight-meter long Chinese national flag onto a ferry boat and displayed it to both sides of Victoria Harbor.

Another group held up flags up as they climbed two of the city's most famous mountains – Lion Rock and Victoria Peak.

About 2,000 taxis decorated with national flags launched a cruise from Tsing Yi. They toured around districts in Hong Kong, bringing a festive atmosphere to the city.

Chen Zimo contributed to this story