Beijing, Pyongyang to focus on success of anniversary 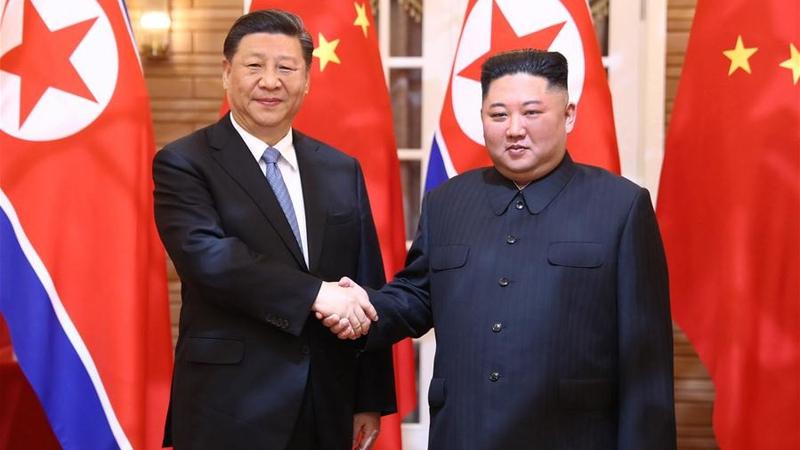 Xi Jinping, left, general secretary of the Central Committee of the Communist Party of China (CPC) and Chinese president, holds talks with Kim Jong-un, chairman of the Workers' Party of Korea (WPK) and chairman of the State Affairs Commission of the Democratic People's Republic of Korea (DPRK), in Pyongyang, DPRK, June 20, 2019. (JU PENG / XINHUA)

Beijing and Pyongyang vowed to work together to make celebrations of the 70th anniversary of diplomatic ties a great success and promote friendly exchanges and pragmatic cooperation as the two countries' senior diplomats met.

President Xi Jinping's state visit to the Democratic People's Republic of Korea in June was a big success and a milestone that has immensely enhanced the two countries' traditional friendship and their strategic mutual trust, State Councilor and Foreign Minister Wang Yi said when meeting DPRK Foreign Minister Ri Yongho in Pyongyang on Monday.

The visit of Xi, who is also general secretary of the Communist Party of China Central Committee, brought relations between the two parties as well as the two countries into a new historical era, Wang said, adding that it is the Chinese government's firm policy to maintain, consolidate and develop friendly cooperation with the DPRK.

Wang said China hopes to work with the DPRK for the early and comprehensive implementation of the important consensuses that Xi and DPRK top leader Kim Jong-un have reached, and to ensure the success of the anniversary celebrations.

Also, China hopes to strengthen communication and coordination with the DPRK at the international stage and turn the will of the top leaders of the two parties and two countries into joint action, Wang said.

Wang, on a three-day visit to the DPRK that started on Monday, emphasized that China and the DPRK have always stood together over the past seven decades no matter how the international circumstances changed.

Xi met Kim for the fifth time during his state visit to the DPRK in June, after Kim visited China four times from March 2018 to January 2019.

Through the meetings, the two countries' top leaders have reached important consensuses over developing traditional bilateral friendship and cooperation, and have together ushered in a new era of bilateral ties, said Ri, who also is a member of the political bureau of the Workers' Party of Korea Central Committee.

Wang's visit is an important part of the two countries' celebrations of the 70th anniversary of the establishment of diplomatic ties, and shows the great value China places in implementing the will of the top leaders of the two parties and the two countries and promoting bilateral ties, Ri said. It is the consistent position of the party and state of the DPRK to firmly push ahead friendship and cooperation with China, Ri added.

Speaking of the situation in Hong Kong, Ri reiterated the DPRK's position that foreign forces should not interfere in Hong Kong, which belongs to China.

Wang and Ri also had an in-depth exchange of views on the situation in the Korean Peninsula, and briefed each other on the latest developments. Both sides agreed to continue to stay in close communication and contribute more to the peace and stability of the region.