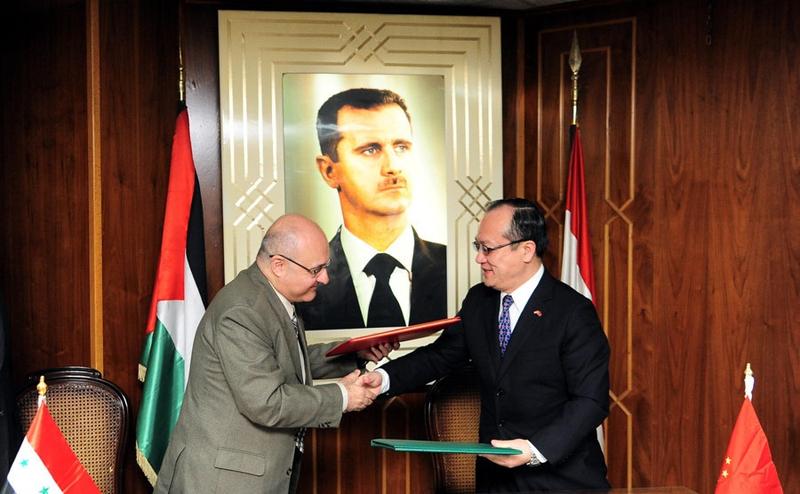 The Chinese Embassy signed two agreements with the Syrian Planning and International Cooperation Commission on Feb 5, 2017 on providing humanitarian aid to the Syrian government worth US$16 million. Chinese Ambassador to Syria, Qi Qianjin, said on Feb 11, 2018 that China would play a bigger role in the reconstruction and development process in Syria by increasing its aid. (AMMAR SAFARJALANI / XINHUA)

DAMASCUS – China will play a bigger role in the reconstruction and development process in the war-torn Syria through increasing its aid, Chinese Ambassador to Syria Qi Qianjin said Sunday.

"I think it's about time to focus all efforts on the development and reconstruction of Syria, and I think China will play a bigger role in this process by providing more aid to the Syrian people and the Syrian government," the ambassador told Xinhua during a tour to the al-Muwasat University Hospital in Damascus.

In January 2017, the Chinese government donated US$1 million to the World Health Organization (WHO) for supporting a humanitarian project on addressing the health issues of affected Syrians.

The project of rehabilitating the emergency center in the al-Muwasat University Hospital reflects a concrete implementation of the Chinese humanitarian aid, said the Chinese embassy in a statement.

Part of the funding for the renovation of the emergency department came from the Chinese donation, it added. The project includes changing electrical wires, water pipes, elevators, and provision of beds and medical equipment.

"We believe this project will play an active role in improving the local medical and health situation," the embassy's statement read.

Qi expressed his hope that the Chinese donation would help improve the medical services provided for the Syrian people.

For his part, Esam Ameen, the head of the al-Muwasat University Hospital, expressed gratitude for the Chinese support.

"China's supportive stance was not only in the political field, but also on the practical level, as China has provided much aid, including this help in renovating the emergency center, which has provided a vital service for the Syrian people," Ameen said.

Elizabeth Hoff, the WHO representative in Syria, said the Chinese support was generous.

"China has provided very generous support for the renovation of the emergency department of the hospital on behalf of the WHO," Hoff said.

"I wish to thank the Chinese people through the Chinese ambassador for this generous contribution so that we could render the services effective and efficient here in the emergency department," he said.