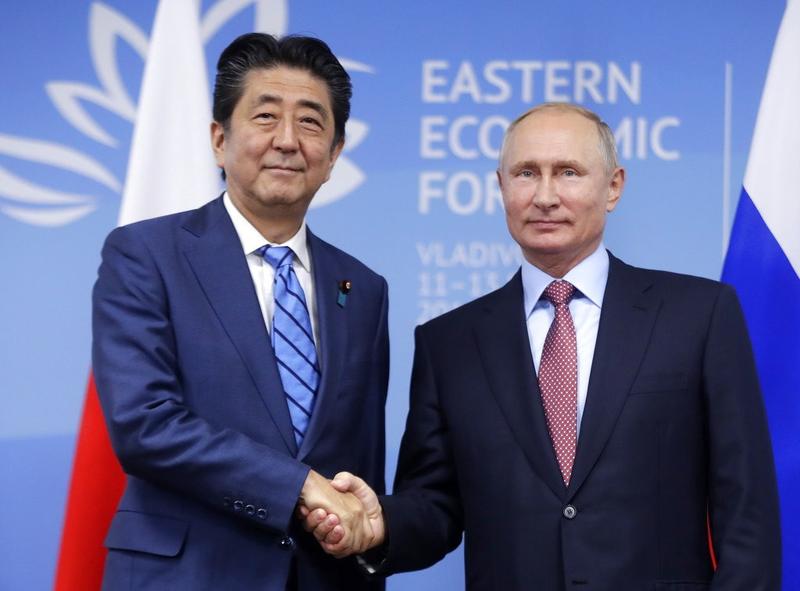 VLADIVOSTOK - Russian President Vladimir Putin turned to Japanese Prime Minister Shinzo Abe on a conference stage on Wednesday and offered to sign a peace deal to end a decades-old territorial dispute by the end of the year.

Let's conclude a peace treaty before the end of this year, without any pre-conditions

"An idea has just come into my head," Putin said to Abe during a question and answer session at an economic forum in the Russian city of Vladivostok.

"Let's conclude a peace treaty before the end of this year, without any pre-conditions." Abe did not respond during the session.

Their two countries have been in dispute for seven decades over a chain of Pacific islands and as a result have still not formally ended their World War Two hostilities. The standoff has held back economic ties between the two near-neighbours.

Later in the same session, Putin said of his offer: "I was not joking." He said his idea was that the two sides sign a treaty first, and then work through the issues on which they are in dispute afterwards.

Establishing its sovereignty over the islands is the crucial issue for Japan, so it would be unlikely to sign a deal without first receiving some assurances from the Kremlin over the fate of the islands.

Both Moscow and Tokyo claim sovereignty over the islands, known in Russia as the Kurile islands and in Japan as the Northern Territories.

Lying near the Japanese island of Hokkaido, the territory was taken over by Red Army troops in the final days of World War Two. When the conflict ended, the Soviet Union kept control, and Russia continues to control the islands to this day.

Both Abe and Putin say they want a solution to the dispute. The Japanese leader has said a deal would unlock trade and investment from Japanese companies for Russia, which is isolated from Western investment because of sanctions.

But for Putin, who casts himself publicly as a fierce champion of Russia's national interests, giving up the islands would risk a political backlash at home.

Earlier, Putin said security in the region was a key issue and that Russia was concerned by a move to establish a US missile defence system there.

"This is all the subject of negotiations... We have been negotiating for 70 years," Putin said.