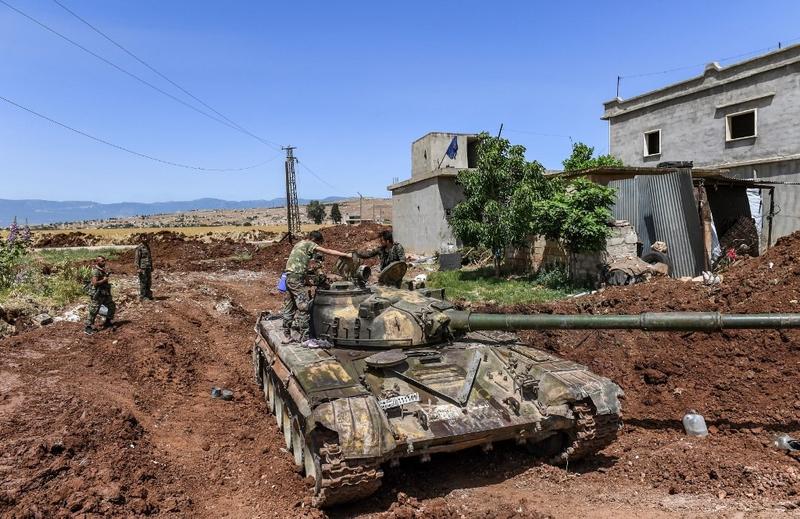 Syrian soldiers stand atop a tank in the village of al-Jabiriya in the northern countryside of Hama province on May 25, 2019. (GEORGE OURFALIAN / AFP)

Syrian army said on Monday it was resuming military operations in a Russian-led campaign in northwest Syria that has uprooted tens of thousands and killed hundreds, blaming Turkey for not abiding by its commitments under a truce deal.

Syrian state media said on Thursday the ceasefire would depend on militants complying with a Russian-Turkish deal last year aimed at creating an Idlib buffer zone.

The agreement to a truce was conditional.. This did not happen.. We resume our military operations against terrorist organisations

"The agreement to a truce was conditional.. This did not happen.. We resume our military operations against terrorist organisations," said the army statement.

Since Damascus declared a ceasefire on Thursday night, its warplanes have not mounted air strikes, though the combatants are still shelling each other.

Damascus accuses Turkey and the rebels it supports of failing to comply with the terms of the de-escalation agreement which require heavy weapons and jihadist insurgents to be withdrawn from a buffer zone.

Under its deals with Moscow, Ankara has forces stationed on the ground in the Idlib region at a dozen military positions.

The region - including Idlib province and parts of nearby Hama - was part of the last major stronghold of armed opposition to President Bashar al-Assad, who has vowed to reclaim all of Syria.

Rebel factions, which had agreed to the latest ceasefire to give civilians a reprieve from the heavy bombing while reserving the right to respond to attacks, said the Syrian army had violated the ceasefire by maintaining its shelling of populated areas.

A week-long aerial attack on cities in Hama and southern Idlib province before the ceasefire led to the most civilian casualties since Russian jets joined the Syrian army on April 26 in the offensive to recapture the enclave.

The Russian-led campaign has been costly to Moscow and its Syrian ally. They appear to have failed to secure any significant territorial gains despite weeks of relentless bombing and have suffered heavy human losses, according to Western military experts.

Rebels said they were prepared to continue another round of fierce fighting after the Syrian army's unilateral announcement to end the ceasefire.

"Today (Syrian President) Assad's gangs announced they were resuming the battles and we tell them we are ready and our will to fight is there and God willing we will inflict heavy casualties," Captain Naji Mustafa, spokesman for the Turkey-backed National Liberation Front (NLF) coalition of mainstream rebels group, told Reuters.

Rebels say Moscow has deployed special troops to make a military breakthrough with no success in one of the biggest campaigns waged by Moscow in Syria since its direct intervention in Syria in September 2015.

For three months, an army offensive backed by Russia has killed at least 400 civilians in northwest Syria and uprooted more than 440,000 people, the United Nations says.

Residents and rescuers say the three-month-old campaign has left dozens of villages and towns in ruins.