APEC a milestone for PNG 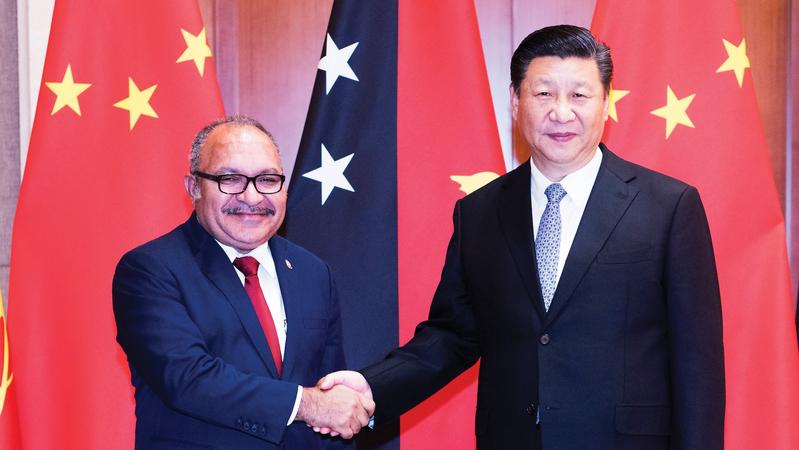 This year’s 21-member Asia-Pacific Economic Cooperation forum, or APEC, will not only mark an important milestone in Papua New Guinea’s (PNG) ambition to be a leading player in the Asia-Pacific region but will also showcase China’s commitment to the region’s development.

Delegates may not know it but the main conference center holding the economic leaders' meeting from Nov 17 to 18, as well as the highway they will travel along to get there, were built largely with Chinese development aid.

In recent years, China has stepped up its investment in PNG with vital infrastructure to help unlock the country’s resource-rich economic potential.

China’s foreign aid is offered on an equal basis, with full respect for the will of the governments and people of the recipient countries. It comes without interfering in their domestic affairs or any political strings attached

In June, PNG’s Prime Minister Peter O’Neill met with the China’s President Xi Jinping in Beijing to sign up to the Belt and Road Initiative. During the meeting, the two leaders agreed to take bilateral relations to a new level.

Xi said PNG is an influential Pacific country, noting the mutual political trust and beneficial cooperation between the two. O’Neill said PNG is committed to deepening its strategic partnership with China, and hopes to expand cooperation in trade, investment, agriculture, tourism and infrastructure.

The PNG government has borrowed to develop the capital city Port Moresby’s infrastructure in time for the APEC Economic Leaders' Meeting. The government believes the benefits of the forum will far outweigh the cost.

The meeting of APEC leaders — minus United States President Donald Trump and Russia’s President Vladimir Putin — will be the culmination of a year-long series of meetings since PNG assumed the role of host for 2018.

“The government of Papua New Guinea has put a lot of investment in this meeting, including new hotels and infrastructure, in the hope it will elevate the country to a new level, especially in tourism,” Law said.

He said Xi’s planned attendance shows the importance China places on the forum, which is a global platform for the exchange of ideas.

PNG wants to demonstrate that PNG is an independent state with its own rich culture, he said.

Thompson noted that while PNG seeks more foreign investment from APEC partners, it will use the forum to demonstrate its ability to manage sophisticated projects in key industries like energy, mining, agriculture and tourism.

In November last year, China Railway Group and the PNG government signed agreements for three projects worth about US$4 billion to upgrade 1,600 kilometers of highways, giving the country its first modern road network.

At present, Port Moresby is not linked to any major towns, and most highland villages can only be reached by light aircraft or on foot.

“The country’s main road, the Highland Highway, is a single carriageway pocked with potholes,” according to a report in the Global Construction Review on Nov 24, 2017.

Since China has shown an interest in PNG’s development, Australia — PNG’s biggest provider of foreign aid — has stepped up its investment in the country it once administered.

Australia, PNG’s traditional partner and a close US ally, is increasing aid and has put more than US$86.5 million into APEC as it seeks to keep its sway over its neighbor.

Wang made the remarks during a joint press conference with PNG Foreign Minister Rimbink Pato when responding to a question about claims in the West that China’s aid for Pacific island countries has created a debt burden for them.

China’s foreign aid is offered on an equal basis, with full respect for the will of the governments and people of the recipient countries. It comes without interfering in their domestic affairs or any political strings attached, Wang said, according to China Daily.

PNG straddles both Asia and the Pacific and controls large swaths of ocean. It is rich in fisheries, minerals and natural gas. But it has little or no infrastructure to exploit its wealth.

Michael Nguyen, an academic writing for the Australian Institute of International Affairs, recently said APEC 2018 marks an important moment for PNG. “This is the state’s moment to demonstrate to the world its potential as a leader in the Pacific region,” he said.

“However, for the international community, it serves as a much-needed reminder of the Pacific’s importance in geopolitics,” he said.

“With China having made considerable diplomatic progress in developing its soft power relations with Pacific countries, this meeting will hopefully serve as an impetus for increasing attention toward the region, specifically its largest country, Papua New Guinea.”

Nguyen added that China has made “significantly impressive” steps in assisting PNG’s development, namely its assistance in the construction of the Port Moresby International Convention Centre.

Where Australian investment in PNG has fallen during recent years, China has filled that vacuum, encouraging businesses and migration into the country, along with large development loans.

In an interview with Xinhua on Sept 10, Justin Tkatchenko, PNG’s minister responsible for APEC, said the China-PNG relationship is moving ahead in “leaps and bounds”.

With a massive Chinese-led infrastructure boom already underway and direct flights from Shanghai to Port Moresby set to take off before year-end, Tkatchenko believes China has a “big role” to play in the long-term growth of PNG.

Among the huge potential for cooperation in mining, education, healthcare, infrastructure and road development, Tkatchenko sees tourism as one of the most important sectors.

Nov 2007: PNG becomes a tourism destination draw for Chinese thanks to a bilateral agreement