Youths show love for HK, back rule of law at music assembly 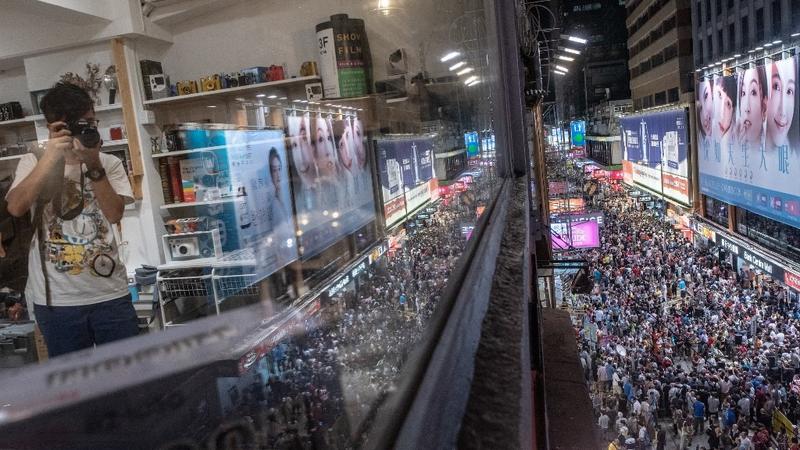 In this file photo taken on July 29, 2018, a man takes photographs in a shop above the pedestrian zone of Sai Yeung Choi Street South in Mong Kok, Hong Kong.  More than 1,000 Hong Kong residents, mostly young people, gathered on June 22, 2019 evening at a music assembly to demonstrate the spirit of loving Hong Kong and supporting the rule of law. (PHILIP FONG / AFP)

The Icon Music Assembly, held at MacPherson Stadium in the Mong Kok district, was jointly hosted by about 20 Hong Kong youth organizations and local associations for various sectors

The Icon Music Assembly, held at MacPherson Stadium in the Mong Kok district, was jointly hosted by about 20 Hong Kong youth organizations and local associations for various sectors.

Young singers and bands were invited to perform at the assembly, which culminated in performers and audience singing the chorus Below the Lion Rock, a famous song that represents the forward-looking and hard-working spirit of Hong Kong people.

During the assembly, representatives from different sectors shared their views, expressing hope that the Hong Kong society will return to peace and rationality, focus on the improvement of people's livelihood and care about the development of youths.

Elsie Leung, former Secretary for Justice of the Hong Kong Special Administrative Region (HKSAR) government, said that the current-term HKSAR government has done a lot of work in improving people's livelihood and providing opportunities for young people, expressing hope that the public would unite to rebuild an orderly and harmonious society.

Luk also expressed his hope for young generation to do their best to develop Hong Kong, and let the "Pearl of the Orient" shine.

A college student surnamed Lee appreciated the HKSAR government for providing youths with internships to the Chinese mainland.

"I wish we students can understand what the Chinese mainland is like by our own experience, and get ready for our future," said Lee.